In Praise And In Fear 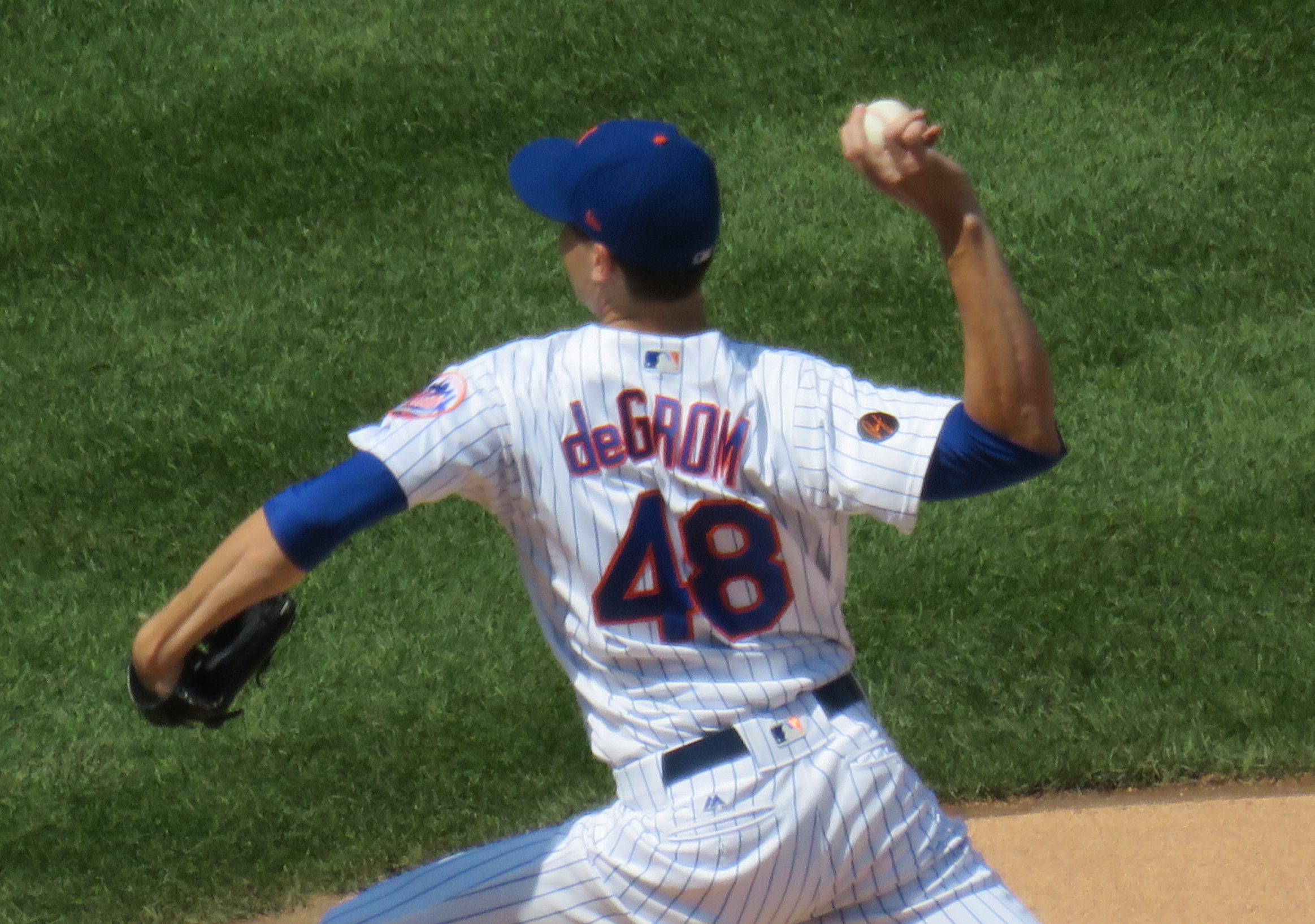 In Praise And In Fear

I don’t know what more that anybody can say about Jacob deGrom. It would be so easy for him to pack it in, go through the motions, and be ordinary down the stretch. But Jacob continues to have pride in what he does and a commitment to excellence. You saw it in Jacob’s first victory since June as the Mets defeated the Reds 8-0. It’s that trait that makes it insane to even think about trading him for any “can’t miss prospect package”, because we know there’s no such thing.

I just hope the Mets don’t waste another career by making dumb decisions.

The Mets have had some internal conversations about giving shortstop Amed Rosario a run at center field, but as of right now that is not on the table.

And it should never be on the table. Look, forget all the history that shows that moving players to the outfield doesn’t work (Howard Johnson, Keith Miller, Juan Samuel, Todd Hundley, Daniel Murphy, Lucas Duda, Wilmer Flores, Jose Reyes.) The added wrinkle in this case is that Rosario, not too long ago, was the number one prospect in all of baseball. Unless prospects become superstars (like Frankie Lindor), then once a prospect hits the majors their value goes down. Rosario, who is not Frankie Lindor, has seen his value go down.

Now, there’s still a chance that Rosario can rescue himself, but not if he all of a sudden has to learn a new position. Amed should be worried about improving his hitting, not learning a new position. Murphy, Duda, and Justin Turner all flourished at the plate when they stopped having to worry about the nuances of three different positions, or when they were returned to their natural position. In other words, the Mets need to stop turning everybody into a utility player. Least of all, somebody who at this point still has enough value to get something back in a trade.

Yes, I understand that sometimes it works. The three examples I was given were Juan Lagares, Chris Taylor, and Trea Turner. Turner was the one out of the three who had the prospect status that Rosario had, if not better. But he only did it temporarily to make room for Ian Desmond before he left the team, and everybody understood that. Lagares was making millions and millions of errors at shortstop in the minors and the Mets had no choice. Taylor was a decent prospect but there was nothing to lose and everything to gain by giving him some reps in the outfield. The Mets aren’t in that “nothing to lose” category. If Rosario goes to CF and bombs, then he’s done as a prospect who has value. He becomes Jordany Valdespin. Even if he takes to the position, forget about him becoming a solid hitter because he’ll spend all his time in spring training trying to master the outfield … and center field at that, which is incredibly difficult.

If the Mets are thinking of putting him there to make room for, say, Manny Machado, that’s one thing. That’s how Hundley found his way to the outfield and even though he was a bust out there, the Mets still had the luxury of dealing his bat, which still had value. If the Mets want to put Rosario out there to fill a need at center field, then they should have signed Lorenzo Cain, who leads NL position players in WAR this season, when they had the chance. (And that’s not hindsight on my part.) If they want a center fielder, get a center fielder. This isn’t Hack My Life.

If the Mets are thinking of putting Rosario in CF because they don’t like what he’s done at shortstop, then they should trade him before other GM’s catch on to the fact that you don’t like him. The Mets do this too much as well … talk crap about their players through “Mets people” in the media before their value sinks like a stone. Dominic Smith was a good prospect a year ago today. But sniping in the media about him (basically since last year) has helped to drive his value through the floor (Smith hasn’t helped with his lack of production either). They cannot do this with Rosario too. Putting him at CF and having him bomb would be the death knell to any value he still has as a future cornerstone for an organization. It’s something that teams didn’t have to worry about with guys like Lagares and Taylor.

Jose Bautista walks a lot. It shouldn’t give him a job in 2019. (Metstradamus)

So yeah, I’m worried. I’m also worried because combining a strategy like this with what they usually do, which is bring back players year after year because it’s easy and scouting is soooooo hard, is going to doom 2019 before it ever begins. Jose Bautista was a pleasant surprise for the Mets initially, but the only thing he’s done consistently is walk and his batting average as a Met is down to .208. They have thought about bringing him back. They can do better. Doesn’t matter that he’s “only the fourth outfielder” or “only a bat off the bench”. They can do better at most of their roster spots. They certainly can do better at Jose Reyes’ roster spot. But maybe they won’t. And that scares the hell out of me. All of it together scares the hell out of me.

But at least Jacob won yesterday.

Did you see where Jayson Werth said that he called every team looking for a job, but that he “wouldn’t play for the Mets?”

“Spring training came and went, and about halfway through spring training, I felt like I had been working all winter, I was ready to play. So I took matters into my own hands and I called every team [but one] and tried to get a job. The only team I didn’t call? The Mets. I wouldn’t play for them.”

I don’t know if it’s the rivalry, the fans, the cheap ownership, or Sandy Alderson’s snarky comments about Werth’s contract, but at this point, it would all be hilarious. I can’t even be mad at the hairy ostrich at this point.