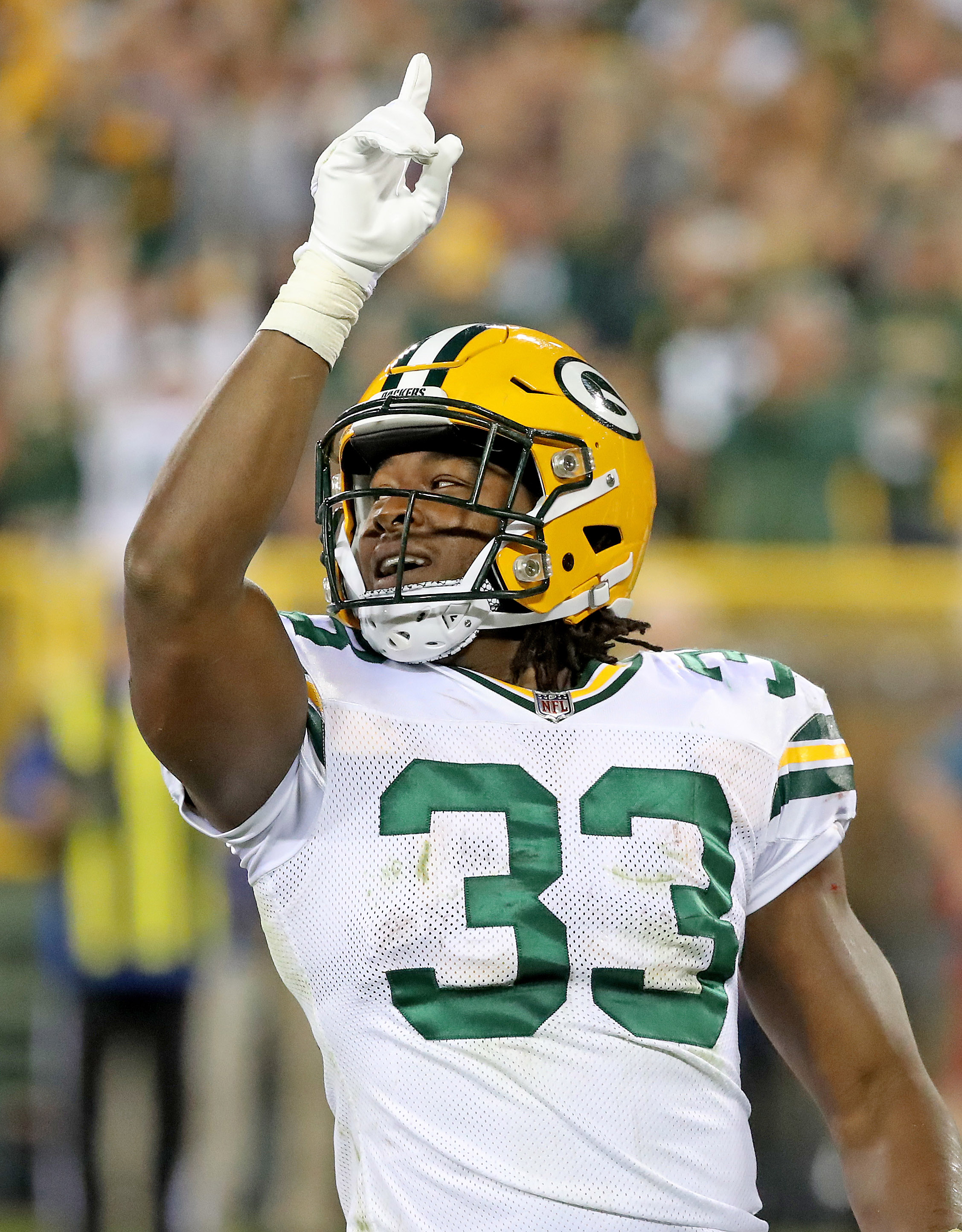 While Aaron Rodgers gives the Packers a world-class talent at quarterback, the situation at running back remains less certain. Last season, injuries and other circumstances led to a running back by committee approach. After one preseason game, no clear-cut starter has emerged. It remains unclear exactly who will be carrying the ball for the Packers and what role each of the candidates will play in 2018.

Jamaal Williams is in the best position to start the season off as the top running back on the roster. The second-year man out of Brigham Young finished 2017 with 556 yards in 153 carries and four touchdowns.

While his 3.6-yard average wasn’t very impressive, Williams adds the most versatility of all the RB candidates. He has enough speed to get to the edge on outside running plays and is strong enough to run between the tackles. Williams also caught 25 passes and averaged more than 10-yards per reception, a solid set of numbers for a rookie running back.

“I just try to go out there and do the best I can with my abilities,” Williams explained. “I just wanna be versatile. I just wanna do everything: catch, run you over, juke you, give you a stiff arm. I want people to have worry about me in other ways than just pounding the ball.”

Packers head coach Mike McCarthy likes what he’s seen from Williams thus far in camp. “He looks bigger, stronger, he looks good,” McCarthy told Fox 11. “I feel pretty confident when we’re talking about the season that he’s going to one of those guys that’s taking that big second year jump.”

Ty Montgomery was the starter at the onset of last season but was injured and missed eight games last year after suffering broken ribs.

The converted wide receiver put on some weight this offseason to prevent future injuries and handle the punishment that goes along with running the football for 16 or more games a season. He has very good quickness and is a sure-handed receiver out of the backfield.

“I think what’s important for me now is being healthy and being on the field while healthy,” Montgomery told ESPN. “I think it would obviously benefit me if I don’t have to play through an injury and I can just be myself.”

Montgomery rushed for 273 yards last season on 71 carries and three touchdowns. While he has shown his running talents in spurts, he has yet to prove he can handle a full season at the position and is probably best suited as a third-down back or situational substitute.

Still, throughout training camp, Montgomery has remained an integral part of the running back competition.

“I think Ty’s transition has been pretty special,” McCarthy added. “Not only what he’s done from a position change but you look what he’s done to prepare himself — you look at his body and the added muscle that he’s put on.”

Aaron Jones remains the third candidate in the Green Bay backfield. The UTEP alum stands only 5’9” but at 209 pounds he is compact and tough to bring down due to his low center of gravity.

Last season, Jones averaged 5.5 yards-per carry, the best of the returning RBs. He finished the season with 448 yards in 81 carries and scored four touchdowns. Jones didn’t contribute much as a receiver, grabbing only nine catches in 12 games for just 22 yards.

The Packers know they will start the season without Jones who was suspended two games by the NFL for violating the league’s substance abuse policy.

Jones has also missed time in training camp due to a hamstring injury which doesn’t help him in the fight for playing time. He just returned to practice today after missing more than two weeks of camp and the preseason opener.

#Packers RB Aaron Jones is back from a hamstring injury. First time he’s practicing since first week of camp

Jones is the biggest breakaway threat of the three contending backs and has the best open-field moves.

Because the Packers know they will be without Jones for the first two games of the season, it could allow another candidate to secure a roster spot although thus far, none of the candidates have really stood out. Devante Mays had trouble handing on to the ball in limited carries last year and has been banged up in training camp. Akeem Judd and Joel Bouagnon got plenty of carries last Thursday against the Titans, but neither really shined and both remain long shots to make the final roster.

As of now, it looks like Williams will get the bulk of the carries early, spelled regularly by Montgomery. Jones will certainly see the ball too after he returns from his suspension. A running back by committee approach is likely with McCarthy riding the hot hand in any given game or the best possible back for any given situation. Still, the opportunity remains for any one of these backs to take over as the primary ball carrier before the season gets under way.