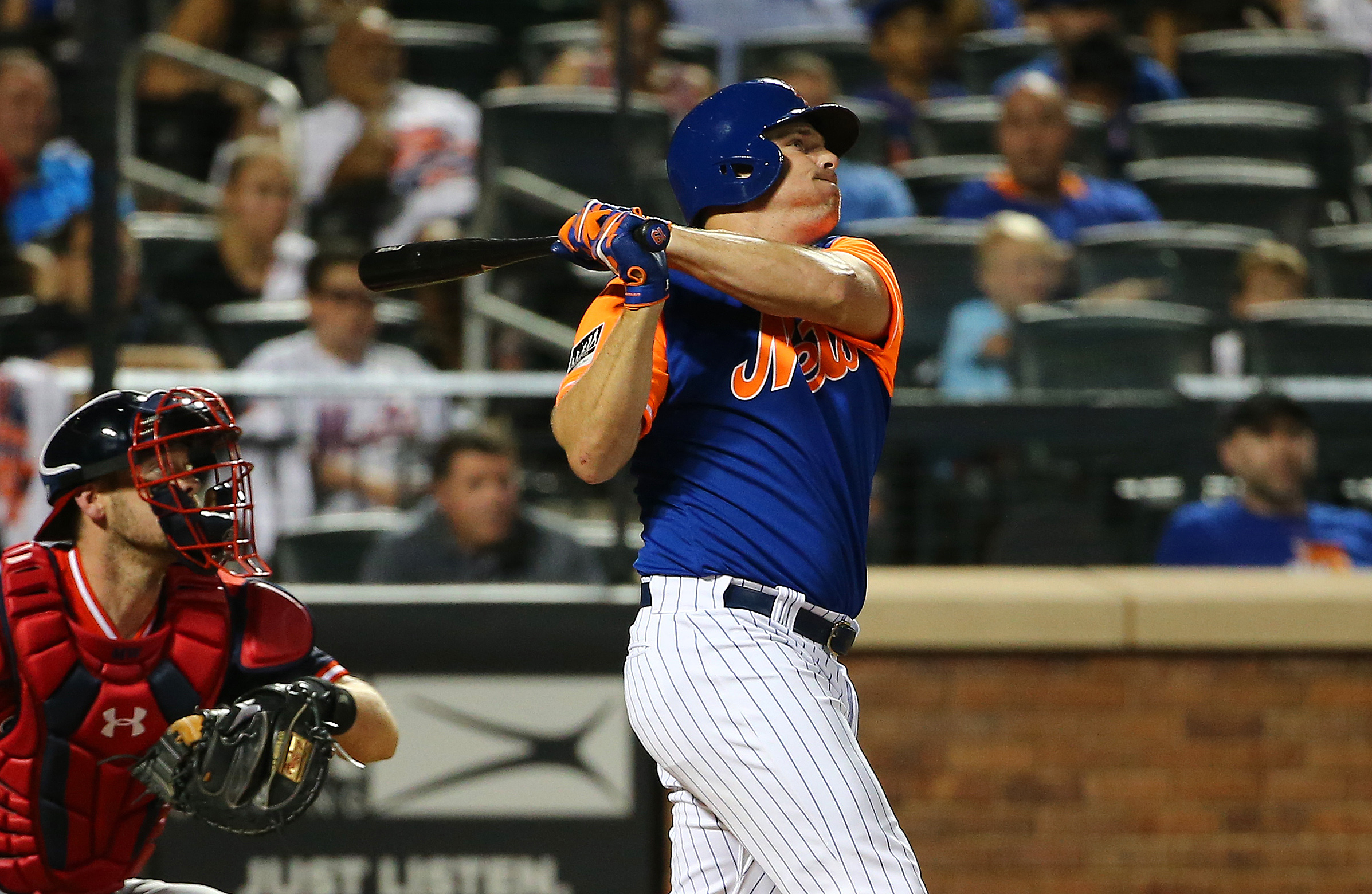 The New York Mets set off alarm bells with their fan base yesterday when manager Mickey Callaway hinted prior to yesterday’s win over the Washington Nationals that Jay Bruce could be the team’s primary first baseman next year. Bruce, who homered in his return from the disabled list last night, entered play hitting just .212 with three home runs and 17 RBI’s on the year, but he is still owed another two years and $28 million through 2020. Since that contract is unmovable right now, the Mets are letting Bruce play at first and right field to try and build up his value, either to help them next season or to shop him over the winter. The problem is that the Mets appear to have their minds made up that their best case scenario for 2019 is if Bruce is the primary first baseman while Brandon Nimmo and Michael Conforto start in the outfield corners.

Now, if Bruce was simply splitting time between right field and first base, it would make sense since the Mets have two top hitting prospects who are primarily first basemen: Dominic Smith and Peter Alonso. That does not appear to be the case, with the Mets apparently having their hearts set on sticking Bruce at first for the majority of the time. Here are some quotes from Callaway about the team’s plans for next season, courtesy of Newsday’s Tim Healey:

Mickey Callaway: Jay Bruce will play a lot of first base the rest of the season.

Might Bruce emerge as the everyday 1B for 2019? “That’s definitely a possibility,” Callaway said.

Mickey Callaway on Dominic Smith: “The deal here is you might not ever get a look. That’s how it goes in the major leagues. Nothing is fair. It is what it is. But he has to keep on grinding and putting himself in a position where he can come up here and get at-bats.”

That second statement personifies all that is wrong with the Mets’ organization as a whole. If the Mets were winning a lot of games and putting Bruce at first was the best chance for them to win, than it is fair to say that Smith simply has to earn his playing time. That is certainly not the case as the Mets enter play today 14 games below .500 and headed towards a second straight 90 loss season. Smith hasn’t done a lot with his chances this season, hitting just .195 with two homers and three RBI’s at the big league level, but he hasn’t been given any extended run of playing time to try and get in a rhythm. The Mets cut Adrian Gonzalez to get Smith to the majors in early June, but quickly replaced him with Wilmer Flores before shunting him out to left field. Smith has done the best he can in left, but the Mets have opted not to give him regular playing time while Jose Bautista, Austin Jackson, and Jose Reyes continue to get plenty of at bats for the 2018 team. None of those players figures to be a factor in 2019, so instead of getting an idea of what Smith can be at the big league level the Mets prefer to run out veteran retreads who aren’t part of the future.

Putting Bruce at first base further exacerbates the problem as it blocks out both Smith and Alonso from big league experience. Alonso is the organization’s most pro ready hitter in the minor leagues right now, having posted a .278 batting average between AA Binghamton and AAA Las Vegas, but the Mets reportedly won’t promote him due to concerns over his defense. That is not great, but it would be reasonable to let Alonso work on his defense in the instructional league if he was going to have a shot to win the first base job in 2019. Callaway all but slammed the door on that possibility yesterday, hinting that Bruce would be the first baseman while Alonso would be left to rot in AAA.

Assuming you’re fine with the decision to ignore the two first base prospects in the organization, the Mets would need to address center field in their ideal alignment. Here is what Callaway had to say on that front, courtesy of Healey:

Mickey Callaway, today, on centerfield: "We’ll have Lagares in the future, we have the ability to go sign people in center, Jackson has done a fantastic job out there in my opinion." https://t.co/uQbTseS80N

So to recap, the Mets’ brilliant plan is to put a right fielder at first base to block two top prospects and play Juan Lagares in center field. Callaway did hint that the Mets could go add a player in center field this winter, but until the Mets show that they are willing to add a top of the market player to the roster it is more likely that player will be a left handed hitting complement to Lagares in the Austin Jackson class than a true starter like A.J. Pollock. If the Mets are going to do that, they literally have their entire starting lineup set outside of catcher, and this is a group that is on pace to lose over 90 games.

It’s getting worrisome that the Mets are going to use a mindset that if everything goes well for them, they will win with this group. The Mets have played at a slightly above .500 clip in the second half, and those results combined with better performances from underachievers like Bruce and Jason Vargas could convince them that they don’t need to do much to get better results outside of adding to the bullpen. This is 100% the wrong mentality, and they should have learned from last season that bringing back the same players and expecting different results is the definition of insanity.

There is a bit of hope, however, in the fact that the Mets still have to hire a new General Manager to replace Sandy Alderson. This new GM should have their own ideas of how to fix the team, and maybe this person will realize sticking Bruce at first base to block talented prospects is a terrible idea. Statements like what Callaway issued yesterday should make all Mets’ fans want an outsider to come in and take over for Alderson, because if John Ricco or J.P. Ricciardi is tabbed as the permanent GM the Mets will be in line for more of the same dysfunction and ineptitude.