Randy Gregory shows star potential but should have Cowboys skeptical 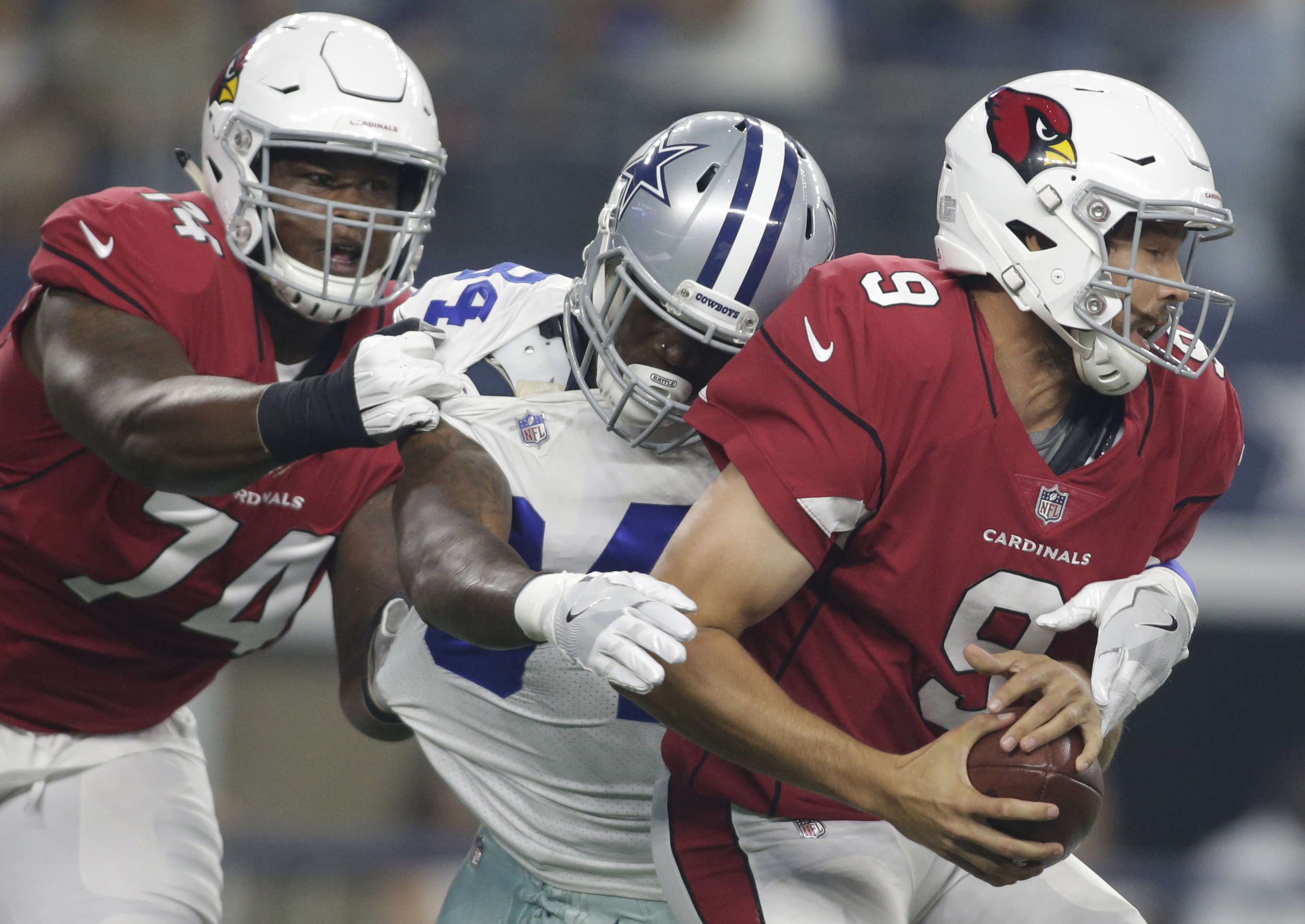 Randy Gregory shows star potential but should have Cowboys skeptical

We’re not here to discuss the Cowboys’ eight turnovers in the preseason 27-3 loss to the Cardinals last night. A quick look at the box score says enough.

What lies beneath is an exciting peak into the near-future. The defense may be the guiding force this season instead of an offense sans Dez Bryant, Jason Witten, and possibly Travis Frederick. This Sunday night massacre was a litmus test for everyone but one man in particular, Randy Gregory, one of the few to pass with flying colors.

But we’ve been down this road before.

Enter the preseason, Gregory looked every bit worth the gamble. He had three sacks in as many games before suffering a ankle injury that held him out until Week 7. The rest of the season, he gathered 16 quarterback pressures but it wouldn’t be until Week 16 the next year he registered his first sack.

Part of Gregory’s lack of production stemmed from a series of suspensions. After failing multiple drug tests, he was held out of the 2016 season until Week 16 when he gathered his first career sack.

More detail could be shed for his missing 2017 season but in short, it wasn’t until mid-July 2018 he was reinstated.

That said, Gregory appears to be in good-standing.

Having stepped on the field just 14 times over the past three seasons, you’d be forgiven being shocked by Gregory showing up against the Cards- if you didn’t completely forget he was in the league.

If so, this sack taking down Sam Bradford on the first drive is a wakeup call.

That spin move is sure to remind fans of his highlight reel at Nebraska if not show his development while waiting in the hall.

While his spin move on D.J. Humphries is tailor-made for SportCenter, his entire technique is worth praise.

At the snap, he matches DeMarcus Lawrence’s first-step off the line. Lawrence’s push on the outside ultimately leads to the assist on the sack — already teasing an exciting edge rushing duo — but Gregory’s awareness elevates him to the next level on the play.

After the quick first step to the outside, he throws Humphries off balance almost instantaneously. As soon as he’s engaged on the edge, he locks eyes with running back Chase Edmunds coming in for backup protection. Instead of rushing through, Gregory’s first instinct sends him inside, slipping past Edmunds and out of Humphries’ hands.

Though it’s just one play, it addresses almost all the concerns of his physical abilities out of college.

But it wasn’t just this one play that makes Gregory an exciting prospect heading into the 2018 season. He finished the night with three total tackles and an additional two QB hits to go with his sack.

Sunday night wasn’t Gregory’s first appearance but it sure seems like a rapid improvement.

Against the Bengals, he was on hand for 10 plays and had one quick hurry but ultimately had an average outing. Defensive coordinator Rob Marinelli gave Gregory a ‘C-‘ on the night. No word on his grade for his Cardinals performance, but it’s surely a step above.

Two games can’t justify a trend, and as we’ve seen throughout Gregory’s career, there are extreme highs and lows. Right now, it’s easy to get swept up in the high especially when everything else around him is so low. The hype remains but there should be healthy skepticism to match the optimism he can keep it up even if his legal woes are in the past.