UND Football: A Look Back 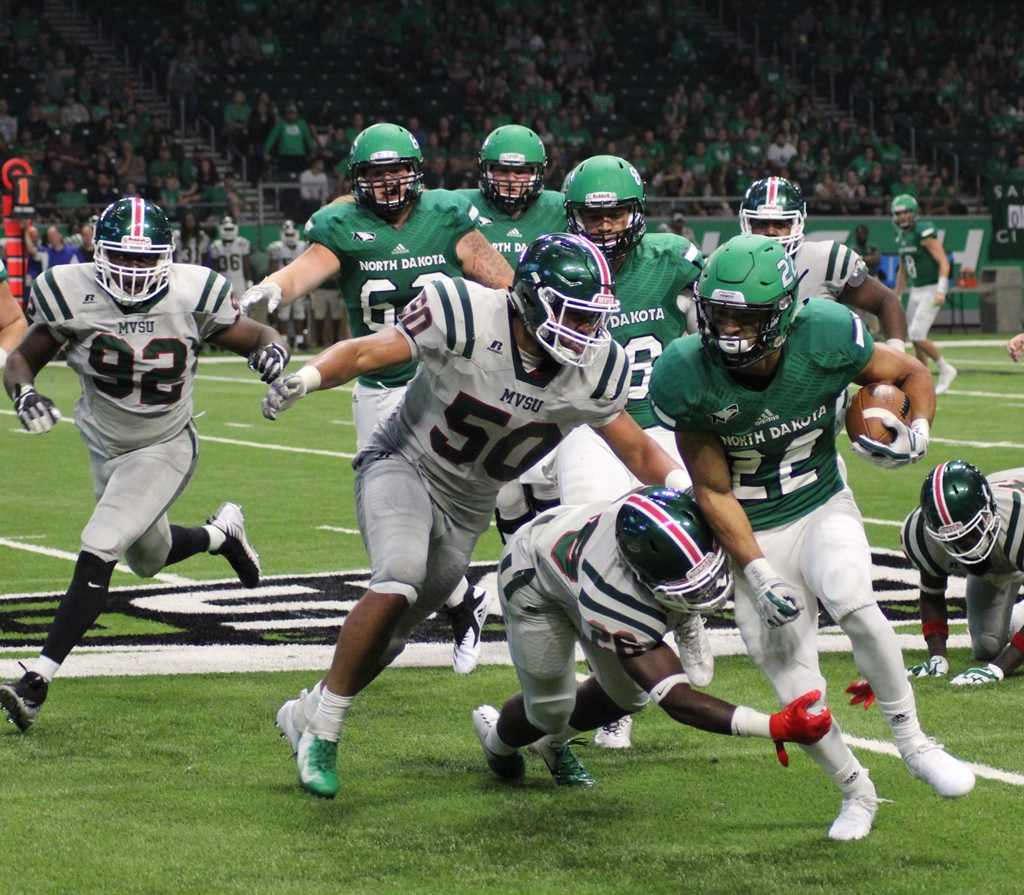 UND Football: A Look Back

Without further adieu, here’s my perspective from the sidelines. While the Fighting Hawks were able to secure a 35-7 win, this game was closer than the score would indicate. The Delta Devils fumbled on the goal line and missed a 29-yard field goal.

Entering the 2018 season, the Hawks ground game is expected to be a strength. Thursday the famed thunder and lightning tandem had a strong debut. Leading the way for UND was Brady Oliveira, the senior from Winnipeg, MB had 108 yards on 14 attempts. His teammate, John Santiago was second with  101 yards on 17 attempts. In spot duty, junior running back James Johannesson had 32 yards on six carries and scored a touchdown in the fourth period to give the Hawks a 35-7 lead.

The Legendary football coach Bear Bryant once said, “offense sells tickets but defense wins championships.” While I am not suggesting that UND is going to win a championship this season. It’s impressive to hold any opponent to -27 yards rushing. However, from here on out, the Hawks opponents get tougher.

Next Weekend, UND travels to Seattle, Washington to take on Pac-12 powerhouse the Washington Huskies. The following week, the Hawks travel to Huntsville, TX to play Sam Houston State who’s always in the mix during the FCS playoffs.

On Thursday night, the Hawks defense against the run was impressive. That said, the secondary will need to make some adjustments. During the first half, Delta Devils quarterback Chris Fowler was 13-20-0, 185 yards with one TD. In the second half, the defense made adjustments and tightened up, holding Fowler to 78 yards passing.

“I thought we played harder,” UND head coach Bubba Schweigert said. “We rushed the passer better. We tightened our coverage. (MVSU) had to hang on to the ball a little bit longer and we were able to get some sacks.”

Linebacker Jaxson Turner is in the backfield again.

Entering Thursday’s game, many Hawks fans were interested in seeing the debut of starting quarterback Nate Ketteringham. The junior transfer from Sacremento State was 19-30-0, 225 yards and three touchdowns. Ketteringham is a big quarterback, 6-4, 225 pounds. First impressions, I thought he was pretty mobile and sees the field pretty well. Finally, on the ground, Ketteringham 6-25 and scored on a two-yard run at the 2:24 mark of the first quarter.

Nate Ketteringham sets up in the pocket