Your Morning Dump... Where the Celtics are reportedly looking at Marcus Georges-Hunt 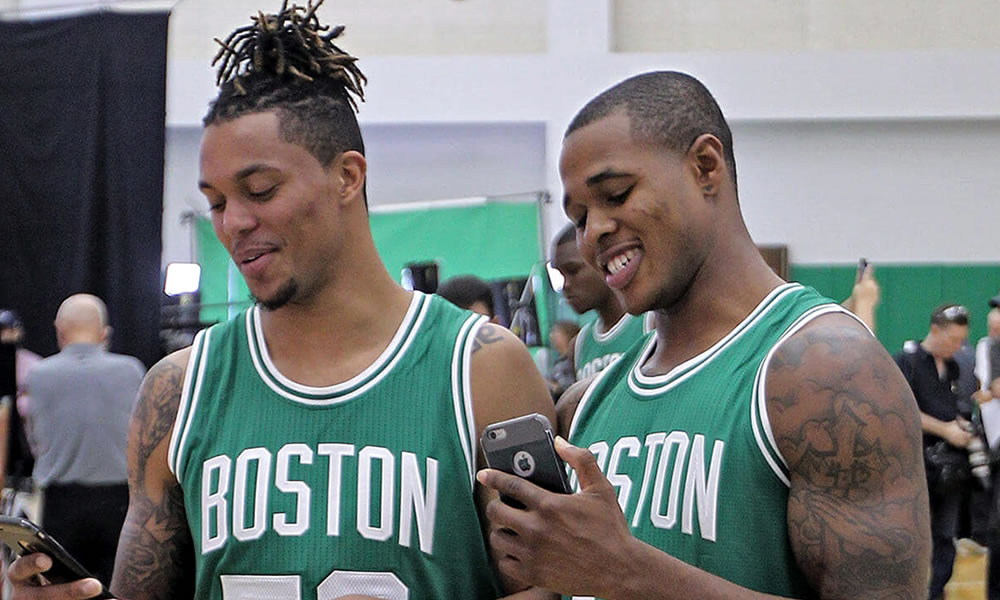 Your Morning Dump... Where the Celtics are reportedly looking at Marcus Georges-Hunt

(FYI: Marcus Georges-Hunt is the guy on the right in the headline photo–the Celtics brought him into training camp a couple years ago as an undrafted free agent).

The Celtics reportedly will bring in swingman Marcus​ Georges-Hunt for a workout today.

The news was first reported by Jay King of The Athletic. (Subscripton required)

Georges-Hunt came to training camp with the Celtics in 2016 and wound up on the roster of the Maine Red Claws after being cut. The 6-foot-5 product of Georgia Tech has played 47 games in the NBA — five with Orlando in 2016-17, and 42 with Minnesota last season.

Things can change in a hurry, can’t they? It’s difficult to imagine a scenario where Jabari Bird stays on the Celtics roster, and with Bird’s likely departure, the team has a roster spot to fill.

Of course, NBA rules don’t obligate them to fill every open roster spot–the Celtics went a considerable portion of last season with only 14 guys under contract–but it would seem that the Celtics have already started auditioning guys to fill Bird’s spot in the lineup.

And, at this time of year, there’s going to be pretty slim pickings in the free agent marketplace.

The Celtics may opt to sign Georges-Hunt or another player before the season starts–or they may opt to do what they did last season and hold a spot open so they have flexibility during the annual post-deadline buyout bonanza.

Page 2: Where we can make fun of rankings, except maybe not?

Sports Illustrated has released the first half of their yearly Top 100 players list, a list which aims to project who the top players of the upcoming season will be. The Celtics only have one representative between No. 51 and No. 100, with Terry Rozier landing at No. 82 on the list.

This is a fair spot for Rozier, a solid player who will be returning to his role as a quality backup with Kyrie Irving’s imminent return. He won’t be one of the central pieces of the starting offense like he was in the playoffs, but he’ll lead what should be a strong second unit with consistent play on both ends of the floor. As the season goes on, Brad Stevens will rely on him more and more; last year taught us that health is the most important factor for a chance at the NBA Finals.

Consider that there are 30 teams in the NBA. That means there are only about 150 players good enough to start for an NBA team. That means that a list of the ‘100 best players in the NBA’ ought to be, more or less, most of the league’s starters, with some top quality bench players scattered here and there.

Rozier’s definitely a guy who, after his late season/playoff surge, belongs on the top 100 list; he’s definitely a starting-caliber point guard. And, arguably, 82 is a fair place to put him–a bit too low, perhaps, but not outrageously so. 82 says that Rozier’s good enough to start for a playoff team, but not a playoff team that’s going to go very far, and that he’s unlikely to be the best player on that playoff team. Honestly, I have a really hard time taking issue with that, and I love taking issue with goofy rankings like this.

Ah well, perhaps I’ll be able to get suitably worked up by a snub or misplaced ranking in the top 50–which should logically include every Celtic starter.

I need the phrase "Timberbulls" to start trending

(That headline appeared over at the Herald)

Thibs, who appeared to be in over his head as a coach in Chicago, somehow talked the rather stupid T-Wolves ownership group into giving him a GM hat, by arguing that the real obstacle to his success as a coach wasn’t his mindless insistence on driving his starting players like rented mules, but the titanic incompetence of Gar Forman and John Paxson. Which, I mean, he’s not wrong about their incompetence, but they’re not entirely to blame for what went wrong there.

Wolves ownership–apparently able to recognize incompetence anywhere except in the mirror–bought into that line and not only hired Thibs, but gave him the GM hat that he wanted.

And Thibs seems to have out Rivers-ed the ex-Clippers GM; where Doc seemingly never saw an ex-Celtic he didn’t like, Thibs has basically turned Minneapolis into the last Bulls team he coached.