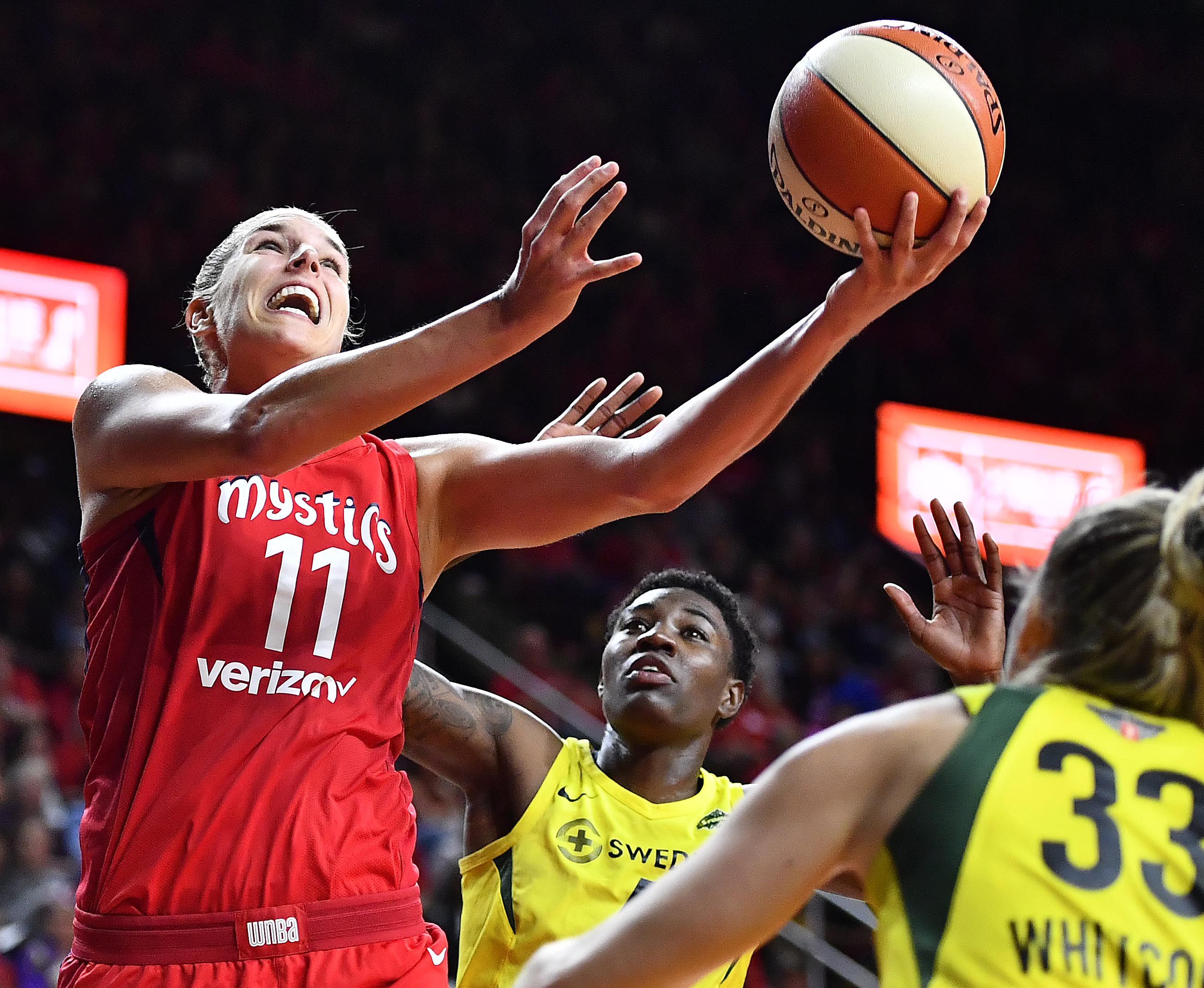 After defeating the Atlanta Dream in the previous round of the WNBA playoffs, the Washington Mystics embarked on their first Finals appearance in franchise history. They were not satisfied with just being there and wanted to win a championship, but they were simply overpowered by the Seattle Storm throughout the series.

In Game 1, Washington had no shot as Seattle asserted their dominance. In Game 2, the Mystics missed all 16 of their three-point attempts, any of which would have been the difference in a two-point loss. In Game 3, it was do-or-die, win-or-go-home for the D.C. team, but they could not extend their season for the right to a Game 4. The Storm were victorious 98-82 in a game that was decided in the second quarter.

In front of the sold-out George Mason EagleBank Arena of 9,164 souls and not Capital One Arena because of a previously scheduled Drake concert, things got off to a great start for the “home” team. The Mystics got out to a 4-0 lead with Kristi Toliver and Elena Delle Donne knocking down jump shots, while the Storm had back-to-back turnovers. Things did not go well for Washington the rest of the way.

In the second quarter, Seattle rattled off a 20-8 run to end the first half that saw the deficit grow from five to 17 for Washington. During that 10-minute frame, the home team shot just 26.3 percent (5-for-19) from the field to only manage 14 points in the quarter. In hopes of lighting a fire under his team, head coach Mike Thibault verbally assaulted an official before heading to the locker room for intermission, which earned him a technical foul.

Minutes into the third quarter, center LaToya Sanders who has been a picture of consistency for the Mystics this season suffered a left ankle sprain that was initially much scarier. She laid on the arena floor, slightly below the elevated basketball court where she initially fell from while trying to make a hustle play, where she was in agony as tears ran down her cheeks. Sanders would return to the end of the Washington bench by the end of the game with her left leg elevated on other chairs and managed to crutch her way off the court once the Seattle celebration began. All the best to the 32-year old.

Despite trailing by double-digits the entire third quarter, the Mystics made one last push starting late in that frame. Washington went on a 16-3 run to again close their deficit to just five points as Tierra Ruffin-Pratt had eight points in six second-half minutes. Unfortunately for the home team, Seattle immediately responded with an 8-0 run and coasted the rest of the way.

The Storm had MVP Breanna Stewart go off for 30 points on 11-for-22 shooting including 4-for-5 from deep, which was complemented by a monster game from Natasha Howard who had 29 points on 11-for-14 shooting and 14 rebounds. The now WNBA champions won the battle of the boards, 39-28, and shot a ridiculous 13-for-26 from beyond the arc.

“They clearly were the best team from start to finish, in my opinion,” Thibault said. “Their experience showed in this playoff series. Their time together showed.”

After previously declining to discuss her left knee injury because she did not want to make excuses, the Deleware native opened up about how the ailment affected her play.

“I mean, it was different,” Delle Donne acknowledged. “I, unfortunately, wasn’t able to practice a lot in the moments that we had off, so I was kind of trying to figure out my go-to moves as games were going on and just trying to get comfortable finding different ways. I’m a very left-footed player. I like to push off one leg, and floaters, step-backs, all that off my left leg, so just trying to find a different way to get it done. I felt more and more uncomfortable as we kept going.”

As much as the team may be disappointed with not winning a championship right now, the Mystics did have a successful season.

“I posted on the board for my team in training camp one of the preseason predictions that was put out there,” Thibault recollected. “I don’t know if it was putting us seventh or eighth, I can’t remember, and our team took a look at that and said, hell, no. You know, it’s been a great season for our organization, for our players, and we had a lot of growth. We’d like to have taken that one last step, but the window for us is open right now. We have a relatively young team. We have only played together with this core group basically for two years, and we have some reinforcements coming next year. And so we’re poised to get better.”

“We had a great season,” Delle Donne made clear. “I’m super proud of the way we bounced back from a lot of adversity that we faced all season long. Obviously this Finals didn’t go the way we wanted it to, but I think the great thing is that we can still improve. We don’t feel like we’ve peaked and this was it for us. We feel like we’ve got a lot of young, great talent, and obviously this isn’t how we wanted it to end, but it’s an experience that we can grow from. So hopefully everybody goes off to wherever they’re going this offseason but continues to improve, get better, and then come back and regroup and build off of this season.”

“A successful one,” Toliver said of the season. “I mean, you can’t be unsuccessful if you’re in the Finals. You have to think big picture, and this team made a lot of great strides from last year into this year. We showed a lot of character this year, a lot of resiliency coming off after the All-Star break playing really well, and then obviously to make the Finals against a really great team. It didn’t go our way, but you’ve got to keep things in perspective, and everybody else in the league wishes that they were playing tonight, and so we’re very aware of that and thankful that we were here, and we know we can improve. And so we will.”

The two All-Stars on the team, Delle Donne and Toliver, had a cute moment at the podium minutes after their season ended when discussing the budding chemistry the team has had over the past two years when the pieces first came together. This should make you feel a little better.

EDD: “Yeah, there’s been a huge transformation in the culture of this team. Last year we were brand new. We didn’t know — I mean, I didn’t even know her favorite beer, and that’s a pretty important thing to know about Panda. Now I can go to the bar, order her everything she needs.”

ED: “To get her — trust me, I know, I’ve got you, Panda. But just even certain things like that, knowing people’s favorite musicians, things outside of basketball. Obviously the basketball stuff, like knowing she likes a dribble hand-off, knowing she’s not a huge fan of the flares, all that stuff.”

EDD: “Everybody knows this. They still can’t guard you. So yeah, she loves flares, hates dribble hand-offs. But no, certain things like that on court is huge, but I think the stuff off court is even bigger, knowing each other’s families, dogs, all of that. Wrigley writes her messages on Instagram all the time. Things like that. That’s what it’s all about. That’s where the fun comes, the camaraderie. We’re only out there on the court a little bit of time together, but the moments that we spend hanging out in the airport, playing ‘would you rather,’ hanging out, getting dinner together, those are the moments that are so special, and what we’re actually probably going to miss the most now that this season has ended.”

Are you crying? Nope, just a little dusty in here…