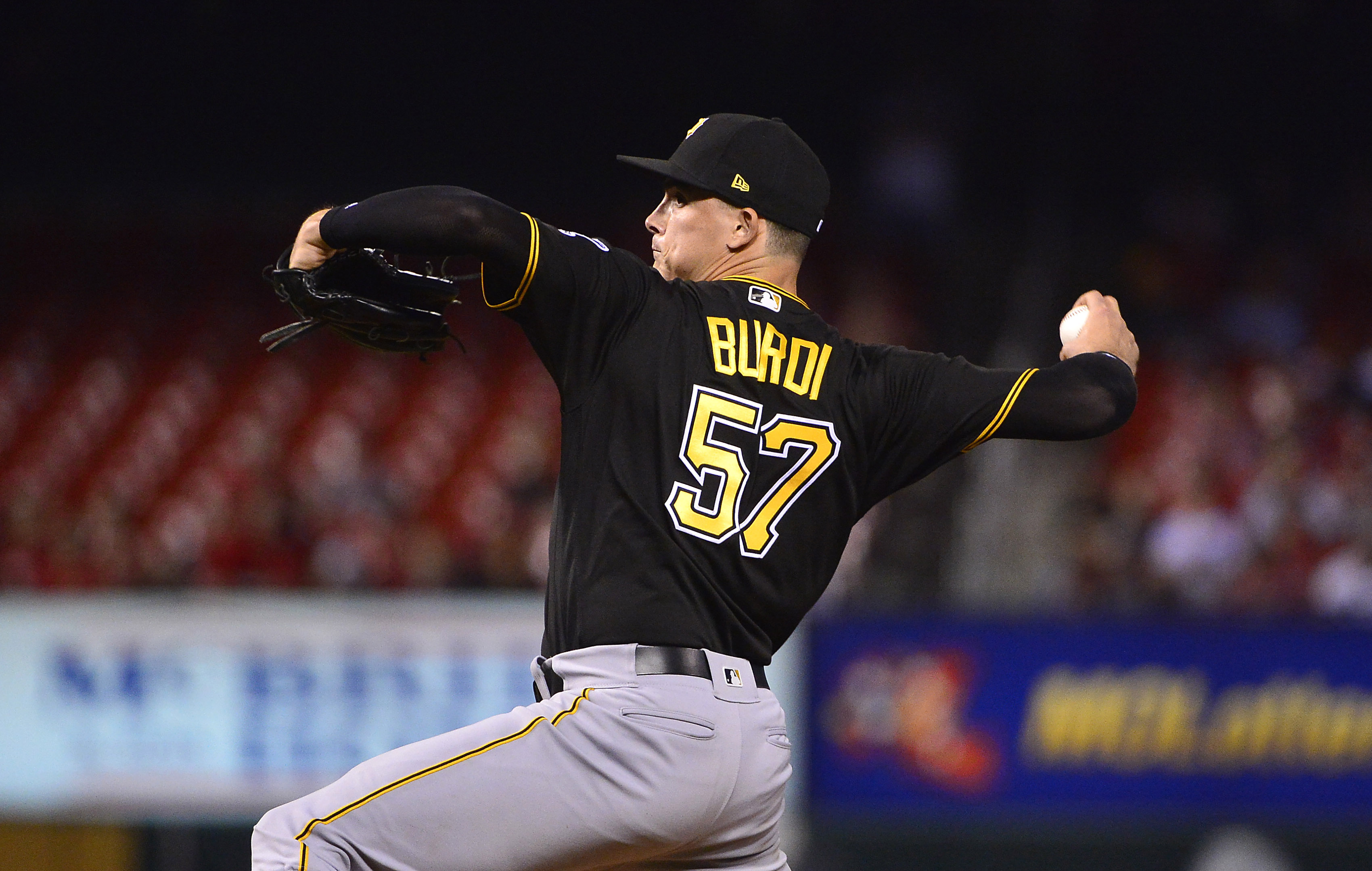 Nick Burdi made his Major League Debut against the Cardinals on Tuesday night.  While the results weren’t there, he showcased an upper 90s fastball and upper 80s slider.

The Pittsburgh Pirates bullpen, and most of their staff, is pretty much set for next year.  One player who is of more intrigue than any pitcher in the system competing for a spot next year is Nick Burdi.

The background on Burdi is pretty well reported – high draft pick, rule five pick, has to be on the club for 60 days next year, etc – but he finally reached the Major Leagues.  While he only lasted a third of an inning, in part because of a Colin Moran error, he did showcase some of the stuff that made the Pirates interested in him last offseason.

Burdi only threw 16 pitches, 11 fastballs and five sliders, but the fastball averaged 96.48 miles per hour and the slider 85.59 miles per hour according to Brooks Baseball.

That’s normal for Burdi, as his scouting report per Fangraphs had an 80/80 and 70/70 for the present and future value on the fastball and slider respectively.  His below average command (40 FV) limited him to 20th in the organization with an overall future value grade of 40.

Burdi only projects as a one win player each year for his six years of club control, but WAR is a counting statistic and Burdi won’t have the innings.  In terms of a defined role, a 40 would make Burdi a middle relief pitcher, but just a bit of improvement in command (career 11.1 percent walk rate in the minors) could push Burdi to a 45, or a low setup relief pitcher.

Given the bullpen features a solid backend in Felipe Vazquez and Keone Kela, and Kyle Crick and Edgar Santana looking like they can hold down some later innings, Burdi (and even Richard Rodriguez) wouldn’t need to be a complete shutdown arm to make the bullpen work.  It has depth, and if Burdi lives up to potential, the Pirates bullpen has even more flexibility to give Clint Hurdle.

Looking at his debut, let’s start off with the good.  He retired the first batter he faced on two pitches, showing a fastball low and away and then the slider to get the fly out.  Burdi didn’t get the slider down and away enough, leading to contact, but it showed the velocity.  Here’s the two pitches overlapped:

But that’s just two of Burdi’s pitches overlaid.  Here’s what the average path out of Burdi’s hand to the home plate looked liked using the pitchRX package and data from Baseball Savant:

The slider (blue) and the fastball (red) had, on average, similar paths out of his hand in his debut.  When looking at all 16 pitches, here were the results:

Burdi missed locations on a couple of his pitches, including on the home run.  But it looks like on Tuesday, based on his average, that Burdi was able to let the 70 slider and 80 fastball follow similar trajectories, which is a good sign.

But the bad for Burdi was again the control, throwing nine strikes and seven balls, including a walk.  This is what Burdi’s strike zone plot looked like:

Burdi missed mostly glove side, perhaps being amped and releasing the ball too far out in front of his body.  But the he also left pitches up, as the error and home run (both in brown) were left up in the zone.  The fly out to center (purple) and the one foul ball (right above the purple) were also up.

What Burdi flashed was the plus velocity and ability to allow the pitches to look similar out of his hand.  That’s in his scouting report, with the plus-plus fastball and the plus slider.  But he also showed the command problems, leaving pitches in the middle and missing glove side.  That’s more correctable.  It was one inning, and nothing can really be taken away moving forward results wise.  But what Burdi did flash was what the scouting reports showed, and that’s a positive first step in your Major League debut.