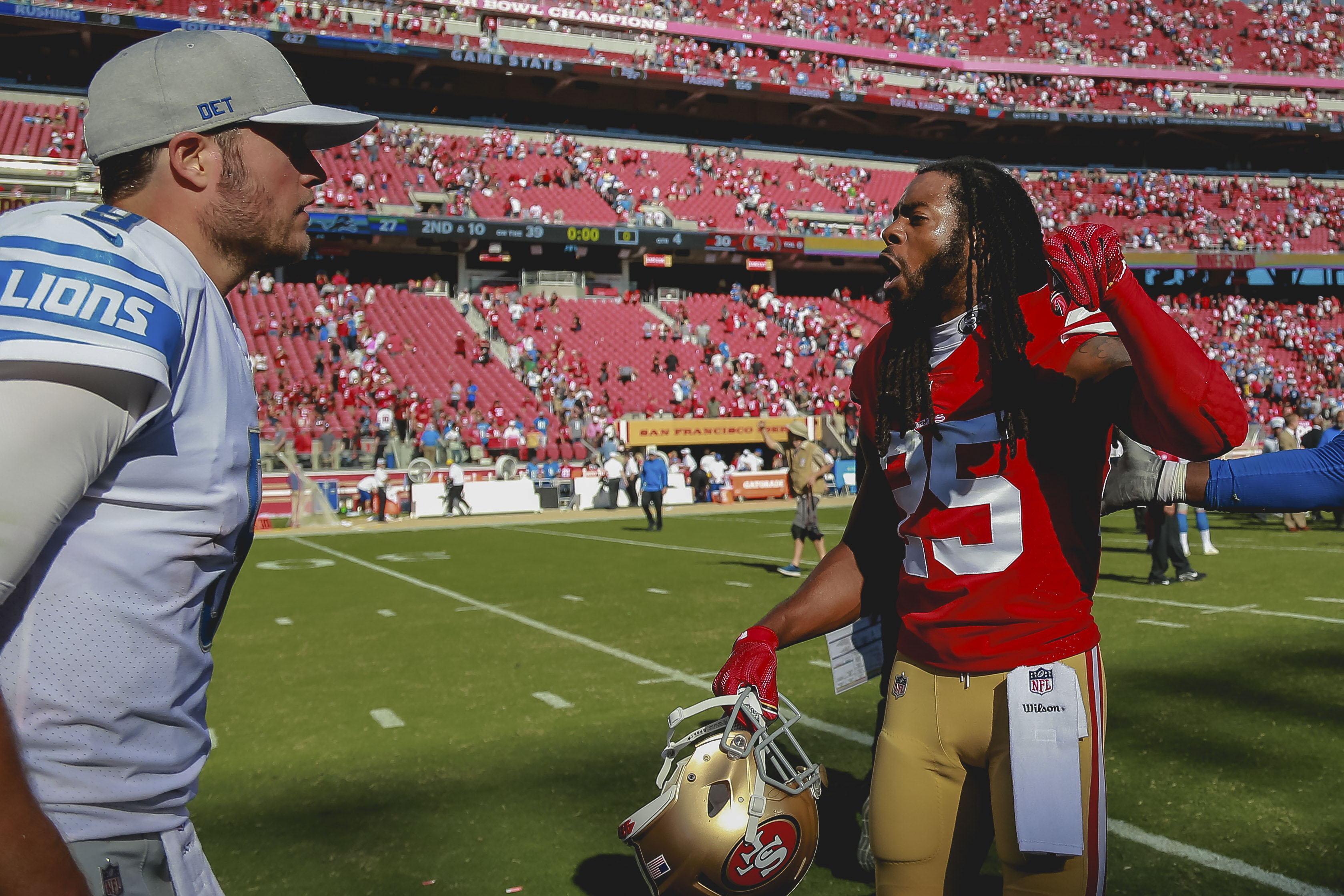 The Detroit Lions started off their game against the San Francisco 49ers rather similarly to their game versus the New York Jets. While they didn’t score first, like in their season opener, they actually had a lead after a quarter.

They led 7-3 at the end of the first quarter after Matthew Stafford found Kenny Golladay for a 30-yard touchdown strike on their second drive of the game. This came after Robbie Gould booted a 45-yard field goal on the Niners first possession of the game.

From there on out, it was almost all San Fran. The 49ers led 13-10 at the half, 27-13 after three and led 30-13 early in the fourth before Stafford attempted one of his patented comebacks. But his two fourth quarter TDs weren’t enough as Detroit fell 30-27 and to 0-2 on the season while San Francisco moved to 1-1.

Stafford for the game went 34-53 for 347 yards and three touchdowns. Besides the TD to Golladay, he found Marvin Jones Jr. and Michael Roberts for touchdowns late in the fourth.

Jimmy Garoppolo, on the other hand, didn’t throw nearly as much and went a modest 18-26 with 206 yards and two touchdowns. His first TD pass went to Kendrick Bourne early in the second quarter and his second one went to Garrett Celek on the first drive of the second half.

As for the ground game, both teams found some success. The Lions, one of the worst rushing teams over the last half decade or so, averaged 5.4 yards per rush on 18 attempts for 98 yards. They were led by rookie Kerryon Johnson who amassed 43 yards on the ground while toting the rock eight times.

The 49ers, which was probably the difference in this one, found much more success. They racked up 190 yards on the ground on 28 rushes for a whopping 6.8 yards per rush. Matt Breida, a second year pro who came into the game with a career rushing total of 511 yards, led the charge with 138 yards on 11 carries. His best run of the day came on a 66-yard touchdown rumble that gave the Niners their 27-13 lead.

The Niners, while in control for most of this one, almost let it slip away in the fourth quarter. After Stafford’s touchdown to Roberts cut the lead to 30-27 with a little over three minutes left in the contest, Garoppolo got the ball back with the chance to salt the game away. But he ended up throwing an interception to safety Tracy Walker, who returned it to the San Francisco seven-yard line.

But unfortunately, for Detroit fans, there was a defensive holding call on Quandre Diggs. While questionable, nonetheless, it gave the 49ers a first down and they ran down most of the game clock. Although the Lions did have one more possession after that with about a minute left, Stafford couldn’t lead a heroic comeback drive.

The Lions, even though they lost, showed some improvement in this one. They sacked Garoppolo six times after not getting any last week. Their run game improved tremendously and Stafford seemed to find his a groove a little bit after looking horrendous in Week One.

But while Stafford had a nice stat line, he didn’t play as great as the numbers may suggest. While he threw for a lot of yards, three TDs and no interceptions, he just didn’t look like himself out there for a lot of the game. He had four or five chances downfield to hit his receivers (mainly Jones Jr.) who had a step or two on their defender and he overthrew every single one. If he hits on even one of those, this could’ve, and would’ve, been a whole different ballgame.

The 49ers also showed a lot of improvement from their Week One loss to the Minnesota Vikings. They got the ground game going after scuffling for 90 yards on 25 carries against the Vikes. Garoppolo looked much more comfortable in the pocket and played turnover-free football after throwing three interceptions last week.

While the season is still young, this may have been a very pivotal game for both of these teams going forward. The 49ers picked up their first win of the season to try to stay on pace with the Los Angeles Rams in their own division and the rest of the teams in the NFC.

The Lions, meanwhile, stayed winless. That is not a good sign for first-year head coach Matt Patricia and Co. as there have been 91 teams to start the season 0-2 since 2007 and only ten of them have ended up making the playoffs. So while it’s not impossible for this squad to turn it around, the odds are stacked against them.

As for next week, the 49ers head to Kansas City to face the 2-0 Chiefs and their red-hot rookie QB Patrick Mahomes.

The Lions head back to the friendly confines of Ford Field as they host the New England Patriots on Sunday night. This will be an interesting one as it will mark Patricia’s first game against his old squad. The Pats are also coming off a pretty lousy showing against the Jacksonville Jaguars and will be looking to redeem themselves.

All stats are courtesy of ESPN.com and CBSSports.com.