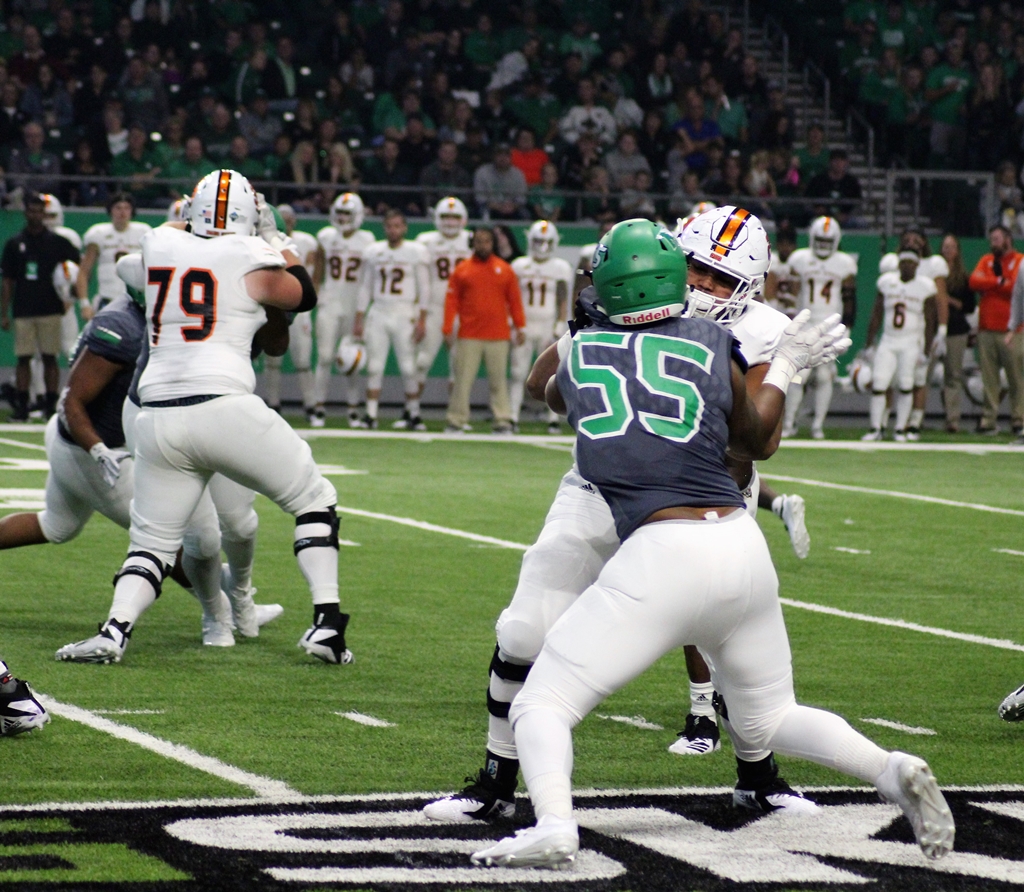 Time to do some Monday morning quarterbacking.

In every game, there are a few key plays that make or break a team. On Saturday, with 8:50 remaining in the first half, the University of North Dakota football team was driving for the Idaho State University end zone.

Instead, UND senior running back Brady Oliveira fumbled the ball at the one-yard line. Bengals defensive back Anthony Ricks recovered the ball in the end zone, killing the Fighting Hawks drive. If UND had scored they go up 21-6.

The drive in question was all for not. The Bengals would go 80 yards in three plays and score a touchdown making the score 14-13. (Watch the replay in the tweet below.)

When the final horn sounded, UND would be on the wrong side of a 25-21 homecoming loss. The turnover in question killed a lot of the momentum UND had gained during the first quarter.

Anthony Ricks recovers a UND fumble in the endzone to half a scoring drive. Bengal ball with 8:50 left in the first half. Trailing 14-6 pic.twitter.com/LamYdh4PPP

Bengals second-year head coach weighed in on the turn of events.

“That why I don’t like this job,” Bengals head coach Rob Phenicie said. “The thing with this, our kids never flinched. We’re going to stop them. Something is going to happen, we’re going to stop them. That’s something we talk about, don’t flinch, and they didn’t. We address turnovers religiously. We want to come out ahead. We came out three to one. We had three and they got one take away. That’s huge for us.”

All-time, UND is 1-2 against the ISU. Over the years, UND and ISU have had some epic battles. Saturday’s game was no different.

During Saturday’s game, the crowd noise in the Alerus center caused problems for the Bengals offense.

“We had two penalties on noise, during our first drive,” Phenicie said in the postgame press conference. “That’s awesome. We practice in Holt Arena with the music cranked because you never play football in a stale environment. So, we practice that way and they still got us twice, or maybe three (times).”

In the end, UND was unable to capitalize on their opportunities. The Alerus Center ended up being a house of horrors for the Fighting Hawks.

“You have to somehow move on. It’ll test your character, no question. We felt we missed an opportunity to keep the momentum going.”

Fighting Hawks fans will be happy to know that the Bengals head coach had nothing but great things to say about the UND head coach.

“First, I want to give credit to Bubba Schweigert and the entire North Dakota program. It’s a program that I admire,” Bengals head coach Rob Phenicie said. “I admire what he does. I like the style that he coaches – toughness. You can see that he preaches toughness – defense. That’s the way you should coach football. Every time that we faceoff against North Dakota it’s an extreme challenge. You know you’re in for a game. You know you’re in for a tough game.”

During the ISU press conference, the Bengals coach said something that caught my ear. Phenicie said, that he likes this road trip because they stay in the Canad Inn that’s connected to the Alerus Center.

“I don’t know what it is,” coach Phenicie said. “The kids love this road trip. It’s a great atmosphere.”

Picking Up the Pieces

Here are a few statistics that stood out this past weekend.

UND’s defense had a rough day, they gave up 566 yards of total offense, including 278 yards rushing.

UND when 1-for-10 on third down in the second half. Hard to win a football game when you’re not converting on third down.