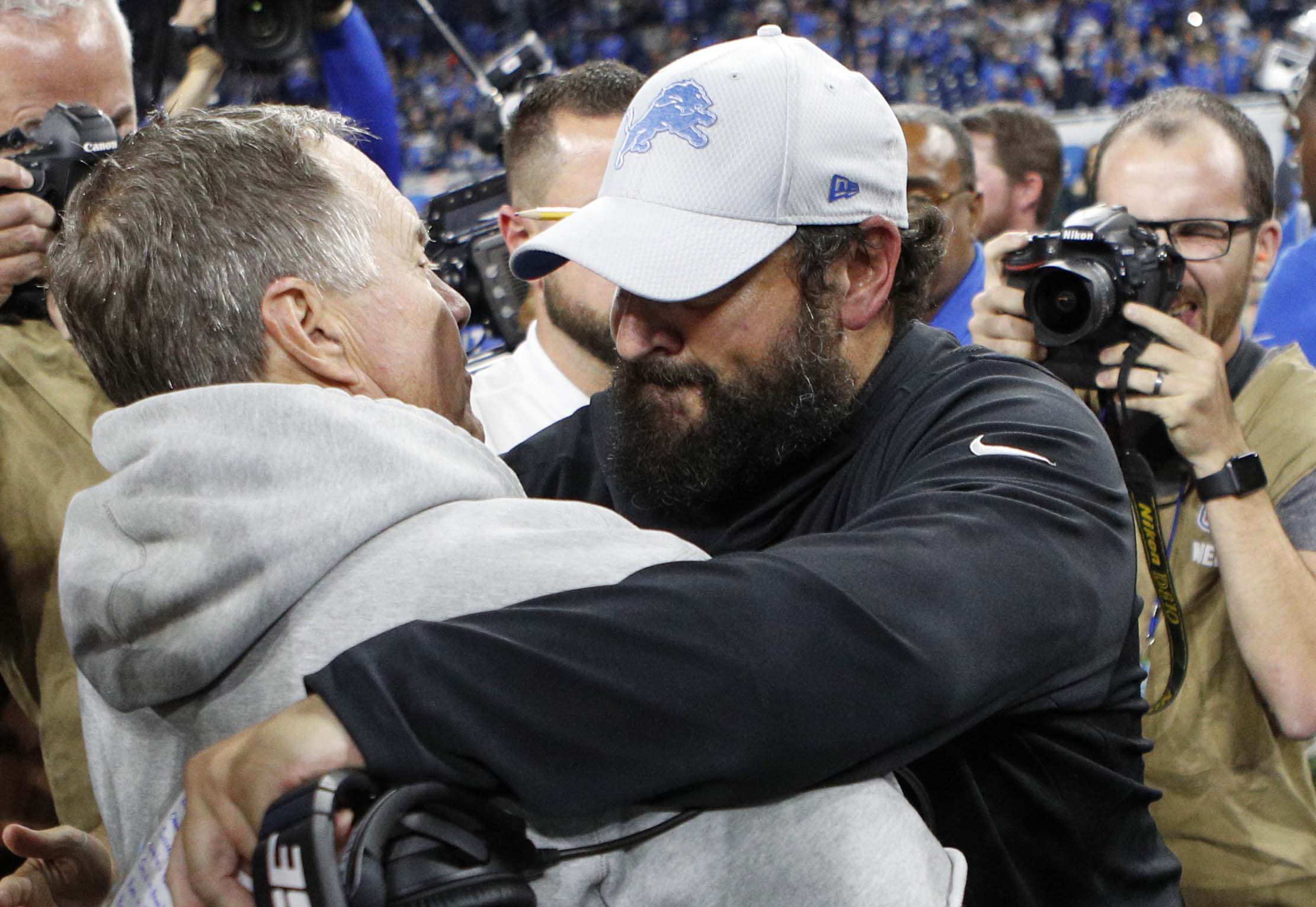 Well, the student outcoached the teacher on Sunday night.

Matt Patricia, who spent the last 14 years in the New England Patriots organization, is now the head coach of the Detroit Lions. He earned his first career win against mentor Bill Belichick and the Pats as the Lions won 26-10.

Detroit (1-2) dominated this one from start to finish after looking out of sorts during the first two weeks of the season.

New England (1-2) was forced to punt on their first three possessions of the game after gaining a total of 13 yards. This allowed the Lions to take an early 13-0 lead after two field goals by Matt Prater and a four-yard touchdown pass from Matt Stafford to Kenny Golladay.

The Patriots finally got on the board right before the half ended after Stephen Gostkowski booted a 36-yard field goal to trail by ten heading into the second half.

The third quarter opened ominously for Detroit as Stafford threw an interception on his first pass of the half. Tom Brady, who looked shaky throughout, took advantage of the mistake and led his team down the field in seven plays. He capped it off with a ten-yard TD strike to running back James White to pull the Pats within three, 13-10.

But the score never got any closer after that as, like the first half, it was all Lions from there.

Stafford promptly led a ten-play, 75-yard drive on the following possession to push the lead back up to ten, 20-10. It was capped off with a 33-yard touchdown bomb to Marvin Jones Jr.

The rest of the scoring after that consisted of two more field goals by the Lions. Prater, who started off the season 1-3 on FG attempts is now 6-6 over the past two games after going 4-4 against New England.

Detroit dominated this game on both sides of the ball and found a balance on the offensive side between the passing and rushing attacks. While Stafford had a good game through the air by going 27-36 for 262 yards, two touchdowns and an interception, the real surprise came on the ground.

The Lions averaged 4.8 yards per carry as they ran the ball 33 times for 159 yards. But even more impressive was the work of rookie Kerryon Johnson. He ran for 101 yards on 16 attempts for a remarkable 6.3 yards per tote. Johnson became the first Lions player to rush 100 yards in a game since Reggie Bush did it on Thanksgiving Day 2013 against the Green Bay Packers. The 70-game stretch without a 100-yard rusher by Detroit was the longest since the NFL-AFL merger in 1970.

The Patriots, on the other hand, struggled all night for the most part on the offensive side of the ball as they fell to 1-2 for the first time since 2012.

Brady completed 14 passes on 26 attempts for 133 yards, one touchdown and one interception. The yardage output was his lowest since Week 17 of the 2015 season when he threw for 134 in a 20-10 loss to the Miami Dolphins. His interception came at a critical time in the game with the Pats trailing by 13 with about eight minutes left in the game. Brady tried to hit Phillip Dorsett on a deep pass when Darius Slay lived up to his moniker of “Big Play Slay” and picked it off.

The rushing attack for New England was actually pretty productive as they ran for 89 yards on 19 attempts. But they fell behind early and had to throw often to try to catch up. They were led by a rookie as well, as Georgia product Sony Michel gained 50 yards on 14 rushes.

Both teams were missing key players due to injuries that they will need as the season moves forward. For the Patriots, wide receiver Josh Gordon was out because of a hamstring issue and defensive stalwarts Patrick Chung and Trey Flowers were out because of concussions.

On the Lions side, defensive end Ezekiel Ansah was inactive for the second consecutive game due to a shoulder problem.

As for next week, the Patriots play host to the Dolphins in an early season AFC-East clash. This game could have important implications in the divisional race as Miami currently sits at 3-0 and could build a three-game lead in the division with a win over the Pats.

The Lions travel to Jerry World to take on the Cowboys. A pivotal win on the road against a struggling Dallas (1-2) team could turn this season around for Detroit and get back to .500 after starting the season off 0-2.