Packers Need to Overcome Injuries to Be Successful 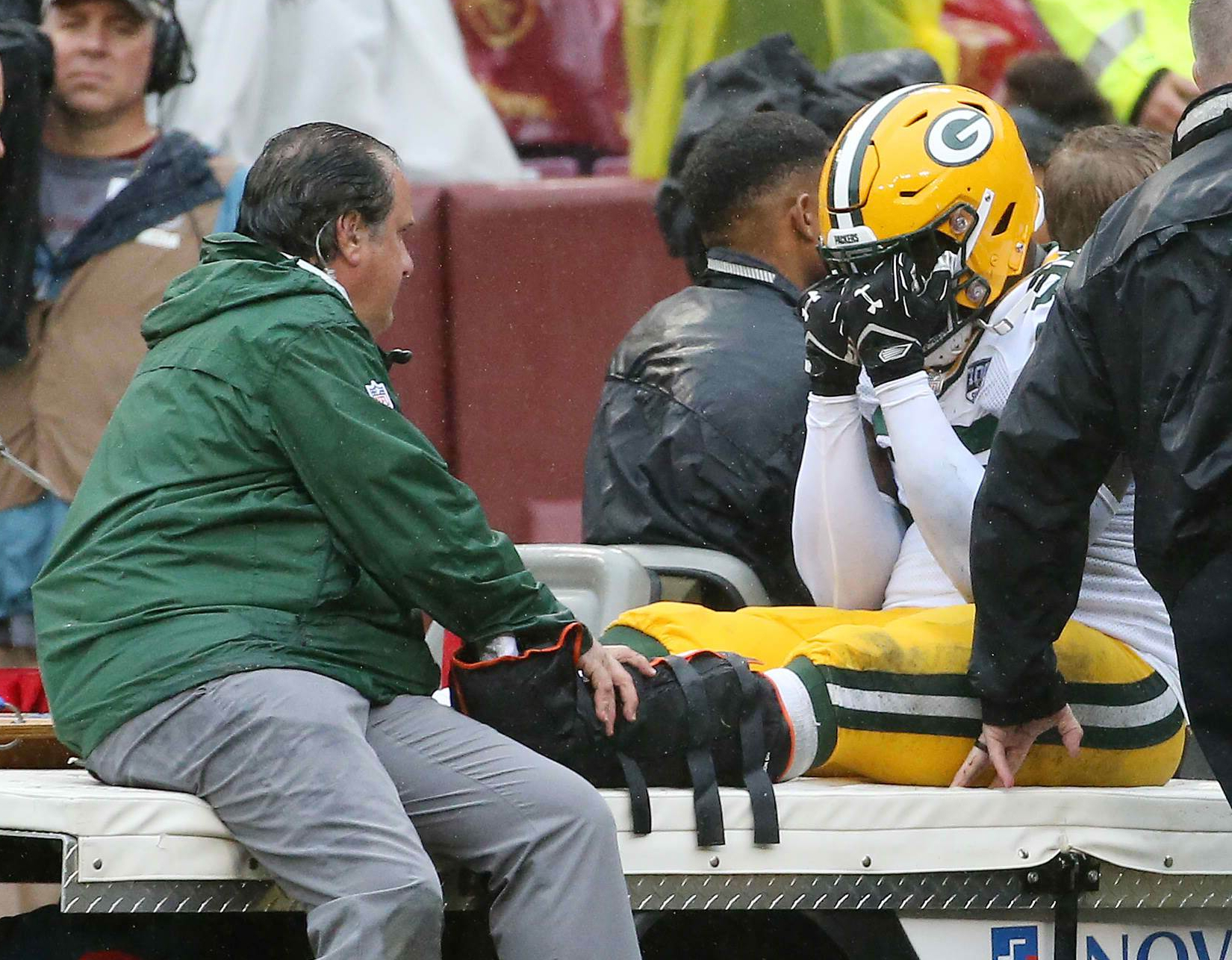 Packers Need to Overcome Injuries to Be Successful

The Packers Week 3 loss to Washington was a tough pill to swallow in many ways. Green Bay entered the game as a road favorite, but they failed to win the game, dropping their record to 1-1-1 on the young season. But worse yet, the team suffered several significant injuries that will present significant challenges and test the club’s depth as the season moves on.

Like all NFL teams, the Packers need to overcome the fact that players will be unavailable over the course of the season. Here is a look at the injuries the Packers suffered and how they will most likely attempt to deal with them going forward.

Starting right guard Justin McCray injured his shoulder against Washington this past Sunday. The injury is not considered long term, but McCray has not practiced this week and is not expected to be ready to go this Sunday when Green Bay hosts the Buffalo Bills.

Veteran backup Byron Bell will get the starting nod in place of McCray. The good news is that Bell is a veteran who has started 76 NFL games at either tackle or guard. The bad news is that in the preseason, Bell performed inconsistently. At times, he was solid but too often, he was overpowered or seemed lost. The discouraging part was that Bell was often facing second or third-string opponents in August.

The good news is that Bell has had another month to learn the Packers offensive system and will have a full week to practice with the first-team offense before facing the Bills on Sunday.

With Aaron Rodgers still limited by his knee injury, the Pack can ill afford to have a weak link on the offensive line, so Bell’s performance will be critical.

GM Brian Gutekunst signed Bell for exactly these kinds of situations. This is Bell’s chance to show that the Packers were wise to bring him on board.

Tackle Bryan Bulaga missed the second half of last week’s game in Washington due to a back injury. He was a limited participant in practice Wednesday. Green Bay is hopeful he will be available against the Bills Sunday.

The Packers placed CB Davon House on the injured reserve earlier this week with a shoulder injury that had been bothering him throughout this season. He is scheduled to have surgery on the shoulder which may mean the end of his tenure in Green Bay since he only signed a one-year deal to rejoin the club this past offseason.

The Packers will replace House with a combination of players. Rookies Jaire Alexander and Josh Jackson will certainly see expanded roles. The big question is how ready they are to move from nickel or dime back to a more prominent role. Alexander and Jackson have made some big plays, but they also are prone to make rookie mistakes.

The Pack also signed free agent cornerback Bashaud Breeland to a one-year deal. Breeland was one of the highest rated corners available this past summer. He has signed a three-year deal with the Carolina Panthers during the offseason, but the deal was voided when he failed his physical due to a foot injury he suffered in the Dominican Republic.

While he had only one interception last year, Breeland finished fifth in the league with 19 passes defensed. It will take him some time for him to get comfortable in Mike Pettine’s defense, but the fifth-year player should adjust quickly and be able to help the Packers add secondary depth.

The Pack played against Washington without Kevin King, their best cover corner. King missed time with a groin injury and he did not participate in the team’s first practice this week. The Packers are much stronger against the pass with King in the lineup, but the addition of Breeland and additional experience for Alexander and Jackson should help the team improve their pass defense. After a sloppy performance against Washington and late in the game against Minnesota, the Pack needs to bounce back and solidify this position immediately.

Muhammad Wilkerson’s season likely ended Sunday when he suffered what has been described as a “serious injury” that required surgery. Green Bay signed the former New York Jets star to a one-year “prove it” deal during the offseason.

The Packers started the season with only five defensive linemen on their active roster. Mike Daniels and Kenny Clark will continue to start. Backups Montravius Adams and Dean Lowry should expect to see more action now that Wilkerson is out long term.

Adams played in only seven NFL games prior to this season. He is an intriguing prospect who has often looked good in preseason games and has shown flashes in limited regular-season appearances.

Lowry started 11 games for the Packers last season and was credited with 34 total tackles. He is more of a run stopper than a pass rushing threat and recorded just two sacks last season. The fact that the Pack signed Wilkerson over the offseason shows they felt they needed an upgrade at the position. Here is Lowry’s chance to show he can be a quality starter.

As of Thursday morning, the Packers had yet to place Wilkerson on the injured reserve list. Expect that move to take place soon. Once Wilkerson is officially on IR, Gutekunst will almost certainly add another defensive lineman to the roster. It is illogical to expect the team to have only one active reserve defensive lineman for Sunday’s game.

Edge rusher Nick Perry suffered a concussion against the Redskins Sunday and did not participate in Wednesday’s practice. He must first clear the league’s concussion protocol before returning to the practice field. As of Thursday, the Packers were unsure if Perry would be available for Sunday’s game against Buffalo.

If Perry is unable to play, Kyle Fackrell would likely replace him in the starting lineup with Reggie Brown also seeing increased playing time.

The Pack would also need a better game from Clay Matthews, the other edge rusher, to provide pressure on Bills rookie quarterback, Josh Allen.

Concussions are difficult to predict, so the coaching staff cannot be sure when Perry will return to the lineup. Once he does, the coaching staff needs more out of their highly paid veteran linebacker than they’ve gotten so far this season.

The Packers certainly have several challenges ahead of them as they attempt to overcome their growing list of injuries. How they handle them will be a big factor in how well they do this season.