Your Morning Dump... Where the Celtics and Warriors see one another 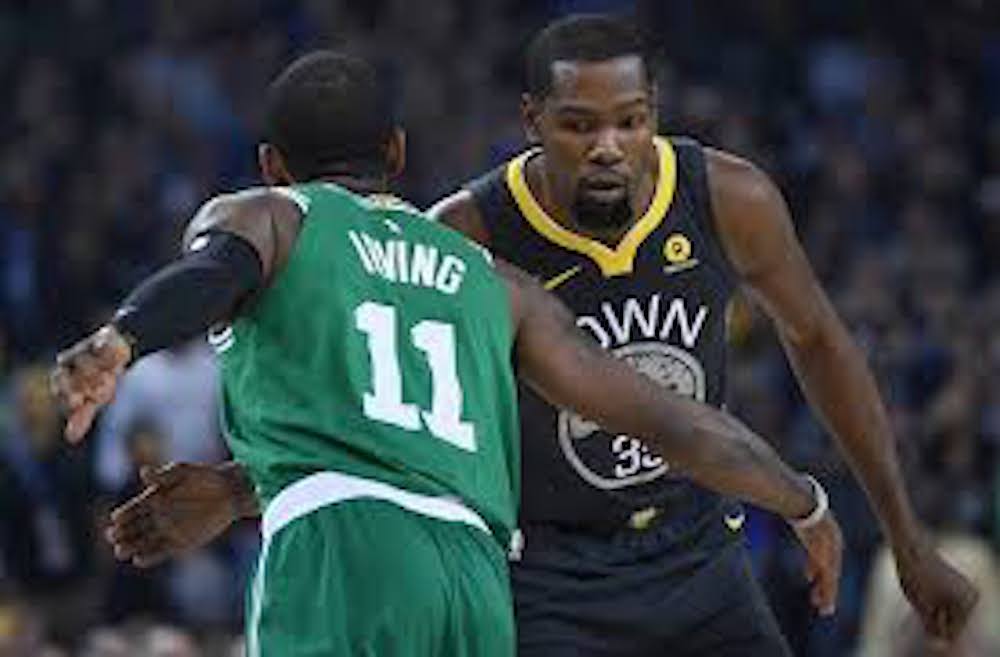 Your Morning Dump... Where the Celtics and Warriors see one another

Every morning, we compile the links of the day and dump them here…  highlighting the big story line. Because there’s nothing quite as satisfying as a good morning dump.

“I like the team out East in Boston,” Klay Thompson told ESPN at Warriors Media Day. “They’ve got a very nice young team. One through five — they’ve got a team that kind of mirrors ours, as far as their length, guys who can shoot and play defense, and an unselfish way about things. So I think that they are going to be a team to reckon with.”

Nor is Thompson’s a voice in the wilderness. Ex-Warrior Stephen Jackson told ESPN The Jump that the Celtics are “a younger version of the Warriors. They got great young talent, some future stars on their team . . .  If you have to compare a team to [the Warriors], you have to go to Boston.

The last three NBA seasons took on an air of inevitability before the first pre-season whistle even blew. The Warriors and the Cavs were poised to meet again in June, and only injuries or a rogue meteor headed straight to Oracle or Quicken Loans arenas could alter the course.

With Lebron gone, there’s only Finals’ certainty in one half of the league, but fans, talking heads and players are starting to talk about the Celtics with the same sense of inevitability as they did Lebron’s bunch.

Of course, nothing is guaranteed. Nothing was guaranteed for Cleveland, also, but when things got tough, they had the best player on the planet to bail them out. The more we all talk about and look at this Celtics team, though, the harder it is to imagine they can’t make it to the game’s biggest stage in late spring/early summer (all it took was the one media day photo of the “Shamrock 5” to whip us all into a frenzy).

The fact that Klay Thompson went out of his way, on top of the league’s highest perch, to single out the Celtics, means that the NBA’s royalty notices, too. Am I the only one, though, that whiffs a bit of arrogance in the way Thompson referred to the green as “the team out east?” It almost reads like, “oh, the Celtics, they’re cute. They could maybe take a game off of us and that would be respectable.”

There are plenty of really good teams in the league — teams that should give the Celtics problems (the Sixers, Raptors, Bucks, Pacers, Rockets, Jazz, Thunder and maybe the Lakers and Pelicans, to name a few) outside of the Warriors. But the Celtics have a chance to really make this a two team league this year. Klay Thompson seems to think so.

The Cs host the Dubs in their debut home appearance on ABC’s Saturday Night on January 26th. Should be the game’s hottest ticket on a winter’s night. Who’s excited?

The Celtics roster that Hayward agreed to join doesn’t really exist anymore. Which makes you wonder: How will Hayward coexist with this loaded squad?

“He’s a guy that can play a lot of different roles,” Celtics head coach Brad Stevens said at media day. “He’ll have games this year where he scores the ball at a high level, and he’ll have games that he doesn’t but does other things to add value to winning.”

That versatility was what attracted the Celtics to Hayward in the first place and what should allow him to seamlessly adapt to their reshuffled roster this season. He scored a tremendous 1.09 points per possession in 2016-17, his last season with the Jazz, through a balanced diet on offense. He ranked in the 75th percentile or better in scoring efficiency with a long list of play types on Synergy Sports: pick-and-roll ballhandling, spot-up shooting, cutting, coming off screens, and in transition. Hayward is one of the main reasons the Jazz became an annual playoff contender. Now, Stevens will be able to use him in any role or lineup.

The Ringer — A reintroduction to Gordon Hayward

Chad Finn from the Globe made reference to being more excited about tomorrow night’s pre-season game in Charlotte than the Red Sox playoff run and the Pats make-or-break game against Miami on Sunday.

And he’s not crazy. I cannot freakin’ wait as well.

How the Celtics will look with their full complement of players, even in an exhibition, is on every fan’s mind. Kevin O’Connor hints at what it might look like to bring Gordon Hayward into the fold, by looking at the little film that does exist from this time last year — Celtics in Charlotte taking on the Hornets during pre-season. Even then, mere days into the new roster, there are hints as to how versatile this team and its offensive sets can be. Hayward screening for Kyrie on one possession, and then the action flipping the next time down the court. Also, the Hayward footage from last year is from before we saw Jayson Tatum assert himself as a future star, and before Jaylen Brown took a leap forward.

If you’re looking for even a sneak peek and can’t wait til tomorrow night, just watch the clips in KOC’s piece on repeat.

And finally, Marcus Morris introduces you to the league’s best bench

A nickname might help. A rallying cry — like, “Let’s be the best bench in the NBA” — might help as well, especially against the likes of Golden State.

“I think it’s going to come down to the bench,” Morris said. “Our bench, I’m going to keep saying it, we’re the best in the league. Until someone change that, I think that’s gonna really push it over the top. Our starting five is amazing, but when you bring the bench in and the way we all gel, it’s going to be special for us.”

Marcus Morris is taking this bench thing seriously. Seemingly the biggest concern coming out of the Celtics camp this summer centers on there being too many mouths to feed. But there’s a pretty clear 10-11 man rotation (a talented one at that) and with a coach and training staff that doesn’t like to play starters heavy minutes, the guys coming off the pine in Boston are going to be counted on to win this team plenty of games.

And Marcus Morris thinks his crew will do that better than any other bench in the league. It’s wild… the guys that will make up the Cs second unit played heavy minutes together in meaningful playoff games and held their own against the best first units in the east. If you had to start Rozier/Smart/Morris/Theis or Ojeleye/Baynes against any team in the east tomorrow, wouldn’t you be ok with that?

Marcus Morris is always going to be a talker (bless him for that), but these aren’t bombastic claims. And if the aforementioned B.W.A embraces both its moniker and role? They’re going to back up Mook’s words.