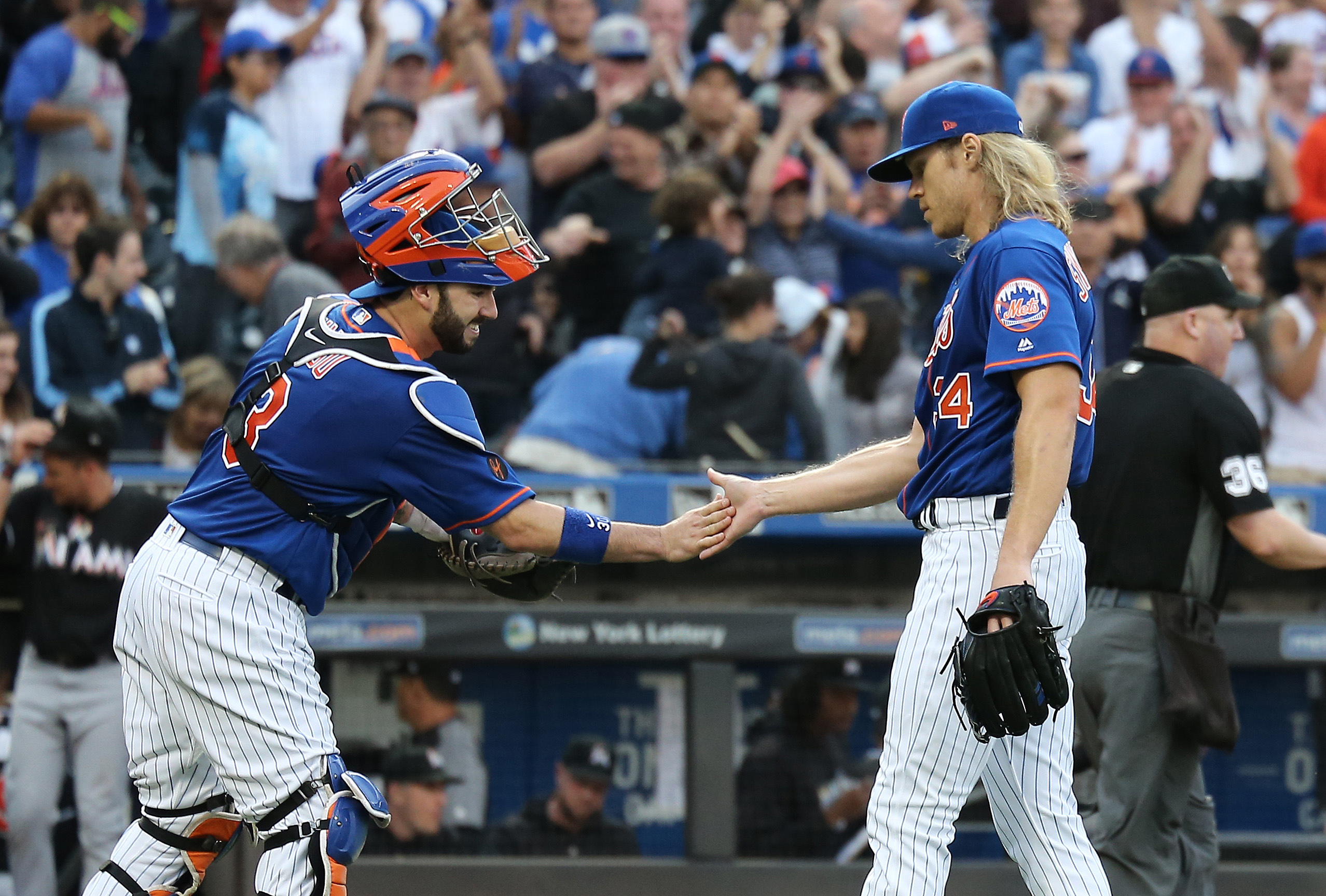 In an inspired effort which he dedicated to his late aunt Carol, Noah Syndergaard threw a complete game shutout to end the season with a 1-0 victory. Not only did this weekend feature the first back-to-back 1-0 games since September of 1969 (a doubleheader at that), but Syndergaard joins such luminaries as Miguel Batista (2:15) and Nelson Figueroa (2:23) to throw Closing Day shutouts against teams that just wanted to get the hell out of Dodge. (Sunday’s closer ended in 2:10.)

(But he may be the only pitcher in Mets history to throw a complete game shutout against a team who had a catcher acting as the manager.)

And with that, the season came to a halt with a soft landing at 77-85, with a September of 18-10. The Mets ended well, as they were 31-20 since August 8th. It could be a springboard to a better 2019, but only if the Mets don’t consider a 5-21 June “unlucky”. Instead, if they realize that they could have built this team a little better around the starters and around the fringes, maybe May and June turn out better. Let this be a lesson to the people that run the Mets that both analytics and scouting matter. For all the talk about which direction the Mets want to go in, I don’t think they’re very good at either.

(Do you bang your head against the wall every time the Yankees bring up a the modern day Eddie Gaedel and he hits .280? Or trade for some dude named Luke Voit and he has an OPS of 1.095 with a Yankeeography in the works? Yeah, me too. But that’s scouting. That’s analytics. That’s paying attention!!! It can’t be that hard these days.)

Christian Yelich is 26 years old, under a controllable and value-oriented contract, was acquired by the Brewers as a result of the Marlins pre-season fire sale, and might win the National League’s Triple Crown. This is how resilient executive leadership in baseball rewards fans.

But I’m getting off on a tangent. There’s plenty of time for that tangent. Today is about being upset that another season … the eighth losing season in the last ten … is up in smoke. It really only seemed like yesterday that we were getting free teddy bears on March 31st as Jacob deGrom started his season which turned out to be straight outta 1968. But back then the headline was chicken and waffles.) From deGrom on a cold March afternoon to deGrom on a cool September Wednesday seemed to take the same amount of time in which Rick Peterson claimed he would fix Victor Zambrano. (The rest of the season seemed to take the length of time between Zambrano and now.) We lost Rusty Staub to start the season, we lost David Wright’s career to end it. And lost a hell of a lot of games in between (especially in June.)

Still refuse to freakout over Mets offseason yet, guys its not even December

@si_jonheyman why is francesa ripping the mets for not making moves? the offseason isnt over yet

#Mets fans need to calm the hell down. The offseason isn't over yet. Everyone angry and panicking. De Aza may be a 5th OF.

You would be hostile no matter what the #Mets do. You are incredibly short sighted. Why not wait and see what they do in the offseason?

I’m on my tangent again. Sorry.

2018 is in the books, placed there by a combination of Howie Rose, Paul Sewald, and Adrian Gonzalez. I’m strangely optimistic about next season, but have become increasingly apprehensive to embrace hibernation season. Truth be told, I’ll miss baseball … even if there are days where I don’t miss the Mets at all. But just as quickly as deGrom’s 1-0 went to 10-9, April will be here before you know it. Hopefully, new players will join us then. Players in their prime. Players who are known as good baseball players. Players that other baseball teams would actually like to have.

My standards are probably already too high. But that’s what hibernation is for: Sleeping, and unrewarded optimism. But also, comfort in the knowledge that if the Mets did need a Game 163 today, as the Cubs, Brewers, Rockies and Dodgers do … that Mickey Callaway had his rotation set up to have deGrom pitch on today.

Look, for a manager that oversaw an incorrect lineup card, this is progress. Bring on 2019.