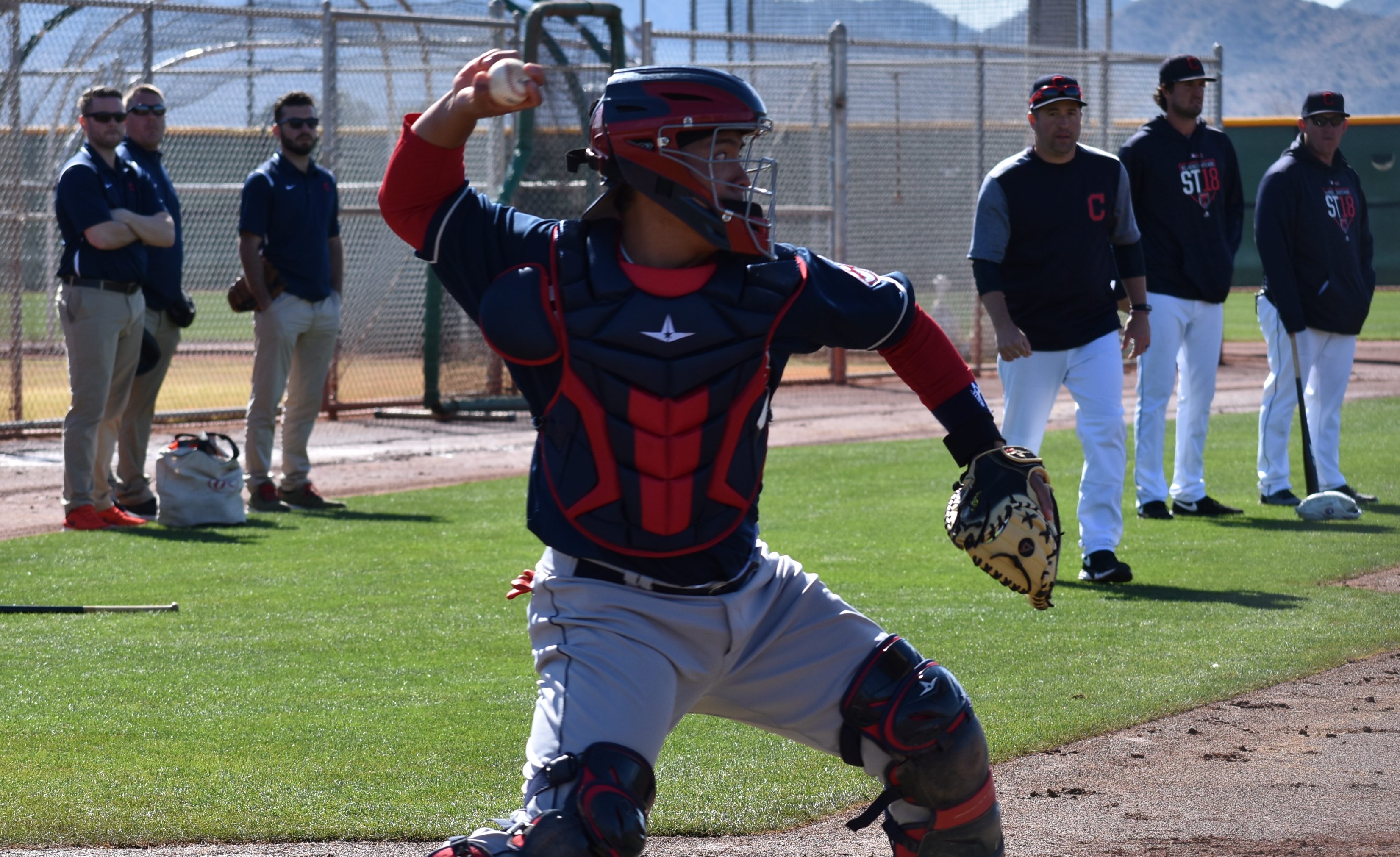 For the second season in a row, the Cleveland Indians Arizona Fall League affiliate will be the Glendale Desert Dogs. The Desert Dogs play their home games at Camelback Ranch, spring training home of the Dodgers and White Sox and the Desert Dogs will feature those two teams as well as the Orioles and Yankees in addition to the Indians.

Because the team is an amalgamation of five MLB franchises, the Indians are only sending seven players to the AFL this year. Before games get started today, let’s get to know them a little better.

With Francisco Mejia in San Diego and Eric Haase in the big leagues, Chu now represents the Indians top/only upper level catching prospect. Tommy John surgery halted the beginning of his career, but he finally played his first full season in 2017 (he was signed in 2012) and has hit 27 home runs and 44 doubles in the last two seasons combined. While not prodigious, he has great power for a catcher and doesn’t have the strike out rate of some of the Indians more typical power hitters. While he isn’t a great defensive catcher, he is serviceable enough to be a MLB back up if his offense can create enough value.

Because of his injury problems, he has only just reached Akron this August at 24 years old after six years in the system and only played 16 games once there. The AFL should serve as a stepping stone to help get Chu to Columbus at some point next season.

The Indians most interesting player in the AFL this year will be Yu Chang, who is heading back for his second run (2016 Mesa Solar Sox). Like Chu, Chang is a Taiwanese born player although he was signed a year later and has already spent a full season in Columbus.

Generally known as a bat first, power hitting short stop, Chang made great strides defensively this year although his power production decreased. While the trade of Willi Castro and the steep decline of Eric Stamets have greatly simplified the Indians middle infield situation for the next few years, there are still many decisions to make regarding who will play third, second and utility man for the MLB squad. Chang hadn’t played anywhere but short since his rookie season, but he returned to third for 23 games this year and played second for the first time, getting in nine games.

The AFL should both give Chang a chance to bring his offense back up to the level he is accustomed to as well as give the Indians a chance to see if he can play the other infield positions well enough to consider him as a utility man in 2019. This could also be a showcase for other teams to see if they may be interested in Chang the power hitting short stop, something the Indians won’t have use of for many years.

Marabell getting an at bat during a Major League Spring Training game in 2016. – Joseph Coblitz, BurningRiverBaseball.com

The final Indians position player on the Desert Dogs, Marabell finished out the 2018 season in Columbus after having a career year in Akron. Always a threat to hit a double, Marabell finally showed some real power this year, slugging .448 with 13 home runs in addition to 31 doubles.

Marabell is also a solid defender who has played all three outfield positions, but is best suited for right. He has an incredible arm that has lead to 33 outfield assists in his first 385 games.

With Michael Brantley, Lonnie Chisenhall, Melky Cabrera and Rajai Davis set for free agency and Bradley Zimmer out until the middle of next summer, the Indians may be trying to push Marabell straight to the big leagues from the AFL. At a minimum, they’ll need him as an emergency back-up option and this could help push him to the next level.

Kaminsky has had the type of minor league career that makes a team not want to trade with the Cardinals. Obtained in the 2015 Brandon Moss trade, he has had nothing but injuries after coming off two great seasons in the St. Louis system. After missing all but five innings in 2017, Kaminsky rehabbed and made 25 relief appearances in 2018 for Lynchburg. He’s had severe command problems since his injuries started up back in 2015, but otherwise was a fine reliever for the Hillcats.

His biggest problem now is that he is fighting against the clock as next year will be his seventh year in the minors. This means that the Indians will need to protect him on the 40 man roster by next fall or he will become a free agent. This fall season could help them make that decision.

There are only four obvious starters on the Desert Dogs and it is possible the Indians could also be using this time to lengthen Kaminsky back out to be a starter again, but this is doubtful.

Garza pitches for the Indians during the 2016 Instructional League. – Joseph Coblitz, BurningRiverBaseball

Garza is going to be one of those four starting pitchers and, like Kaminsky, has had major injury problems throughout his minor league career. Since being drafted, he has pitched just 179.2 innings (for comparison, Juan Hillman was also drafted in 2015 and has thrown 353.1). He made a career high 18 starts this year and advanced as far as Lynchburg.

With a 9.1 K/9 and 2.6 BB/9, Garza really showed some promise this year. He is already 24, however, and needs to make up some ground. At most he should be expected to hit Akron by the end of 2019, but continuing his season should help him throw over 100 innings next year without hitting a wall.

Siri closes out a game for the 2016 AZL Indians. – Joseph Coblitz, BurningRiverBaseball

Siri may have the most electric arm in the Indians system as far as relievers are concerned and getting that arm to throw more strikes appears to be the Indians concern. Just 22 years old, Siri had a 13.4 K/9 last year in Lynchburg, his third straight season above 13. He also had a 5.5 BB/9 and has had just one season under 5.0, 2016 between Arizona and Mahoning Valley.

Siri has definite closer potential and I’d expect him to get fast tracked to the Majors as soon as he gets his command under control.

Robinson pitches for the Indians during a 2015 Instructional League game. – Joseph Coblitz, BurningRiverBaseball

Robinson is another option for the MLB bullpen in the near future, although he’s less extreme than Siri as he walks and strikes out fewer batters. His overall success has been similar, however, and he made it up to Akron for one game to start the 2018 season before being sent back to Lynchburg. The Indians choice to send two high end relievers to the fall league is similar to their picks of Argenis Angulo and Leandro Linares last year. In 2017, both pitchers struggled and it may have delayed or completely stalled their Major League aspirations. If Siri and Robinson pitch well it could do the opposite, especially with at least three spots opening up in the 2018 Indians bullpen. While both pitchers will likely start 2018 in Akron, this is a chance to get themselves on the short list for when the Indians will undoubtedly need relief help.