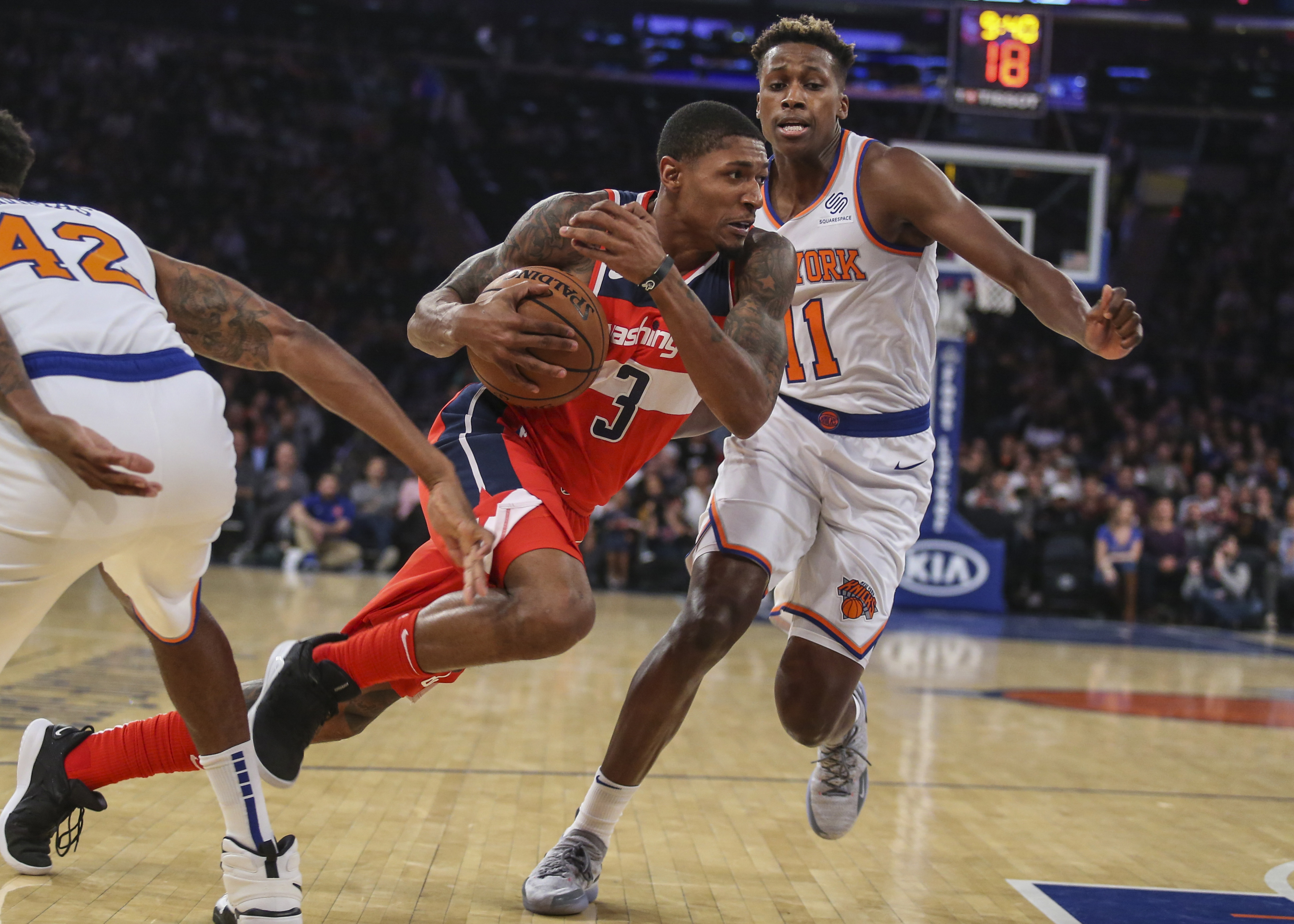 In a rematch of the preseason opener, the Washington Wizards faced the New York Knicks in their third preseason game of the season. Markieff Morris did not play with a sore abdominal and Dwight Howard returned to D.C. after seeing a specialist for his sore back that he had a setback with. On Saturday, Howard had another workout with the coaching staff and then he started to feel soreness again. He will receive a pain relieving injection according to Scott Brooks and the hope is that he can get back on the court next week, likely starting with non-contact work. Of course, that is a hopeful plan. On the court, Washington put together a solid performance early to build up a large lead and left The Mecca with a victory.

In under 28 minutes each, John Wall and Bradley Beal combined for 34 points, 12 assists, and 10 rebounds. They were a +42 in plus-minus differential. Wall started the game off with a couple of nice three-pointers: one spotting up in the corner and another one in rhythm dribbling the ball up the court. Beal was smooth all game with attacking the basket and made seven of his 10 field goal attempts. The only thing Scott Brooks will have a problem with is his mere three attempts from beyond the arc. On the other hand, Brooks will be happy that his backcourt combined for double-digit rebounds, which has been one of his many points of emphasis during training camp.

Spot up shooting John Wall? He's been working on it. pic.twitter.com/Fuw35Pwghq

Yeah, Bradley Beal was working on his ball handling this summer. pic.twitter.com/jBH8ATIWKZ

With Howard out for who knows how long with his prolonged back soreness, which is not to be taken lightly given he has had back surgery in the past, Ian Mahinmi moves into the starting role as he has during the preseason. Mahinmi can be serviceable when he is in there as he is in the best shape of his Wizards career. The issue is the French big gets into too much foul trouble. Against the Knicks, he picked up five personal fouls in less than 21 minutes of play. He had 11 points on 3-for-4 shooting, four rebounds, two blocks, and three turnovers as well. How will Washington deal without Howard if Mahinmi can only effectively play around 24 minutes a game?

Thomas Bryant, who is a nice young center who Washington claimed off waivers from the Lakers before free agency, suffered a hyperextended knee and sprained ankle on his left leg when coming down on Wall’s foot during the game. Bryant was down in pain for a while before being helped to the locker room with his arms draped around Otto Porter and Flave, a team security member and one of Wall’s close friends. Bryant will be re-evaluated on Tuesday, but if he misses time then the only other center on the team is Jason Smith. The ultimate teammate did have a nice game with 11 points and six rebounds in 13 minutes, but unless he is consistently making his jump shot, which was not the case last season, he is too much of a liability to play extended minutes.

That leaves the Wizards with one option: small ball. Markieff Morris, Jeff Green, and maybe even Otto Porter could play the five. Morris had done so often last season, Green has the versatility to do so, and Porter was given a couple minutes to do so against the Knicks. Thrust into the starting lineup, Green fared well with 16 points on 7-for-10 shooting, five rebounds, and three assists in 27 minutes. The issue with going small is that there can be rebounding issues, which Washington struggled with last season, but it can also lead to a potent offensive attack. If Howard and Bryant are both out to begin the regular season, I can certainly see small ball getting quite a bit of run.

The Wizards have had 38, 39, and 36 three-point attempts in their first three preseason games. That matches their three highest attempt totals from all last season. The percentage is not where they want it yet, but one would think that comes with the law of averages. So far, Washington is shooting 30-for-113 from deep for just 26.5 percent. That is 11.3 percent lower than the clip they shot last season, which is drastically different. Do not sound the alarms yet as it was guys like Kelly Oubre and Troy Brown who were a combined 2-for-10 from the field on Monday and they will not be taking that many in the regular season. There is a fine line between jacking up threes because your coach wants you to and making sure that they are still high-quality shots. Beal and Porter know that. Washington is still trying to find that middle ground. They will have two more preseason games to try and figure that out.

Next Game: Washington travels to Detroit to play the Pistons on Wednesday. With the final preseason game on Friday against the Long Lions from the Chinese Basketball Association, the penultimate preseason game may be the actual tune-up for the starters.