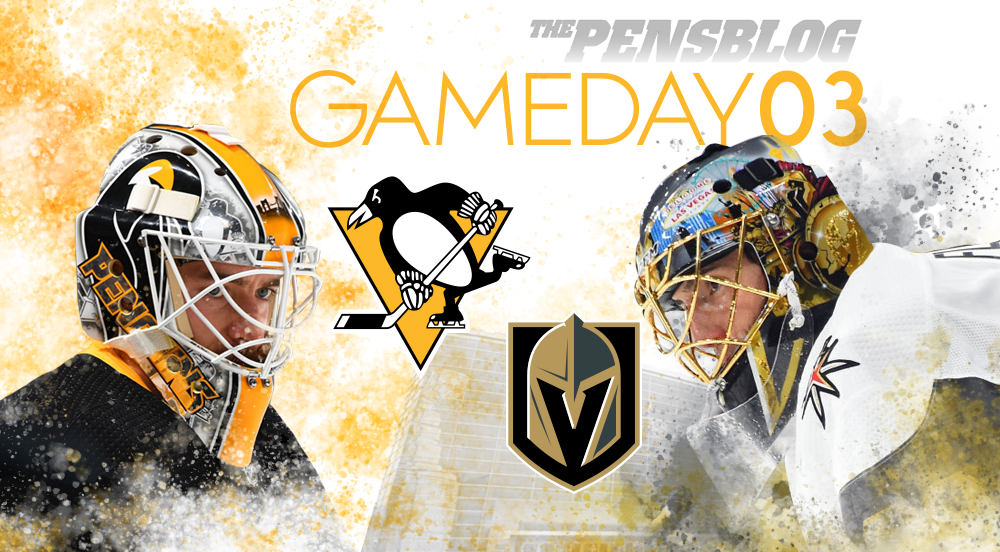 After a seemingly long hiatus, the Penguins get back to action as they welcome the defending Western Conference Champion Vegas Golden Knights to the Paint Bucket for a Thursday-evening tilt.

We’d say it’s a showdown of the two lightning rods of the Murray / Fleury debate, but it’s not, because Fleury tended the twine last night as the Golden Knights fell 5-2 in a Stanley Cup Final rematch, and Murray has been ruled out of tonight’s contest with a concussion.

Murray was concussed at practice on Monday, allegedly, though it could have happened when Gallagher crashed into him on a Montreal goal on Saturday night. Gallagher probably also did 9/11.

Speaking of 9/11, the Pens crashed and burned in a listless performance, falling to the Habs in a 5-1 thumping. The Pens were about as inspiring as Alan Rickman reading the ingredients of Paul Mitchell Volumizing Conditioner, and you can’t do that in this league and expect to collect points.

The flightless fowl will look to get things back on the right flight path, and they’ll do so with the following personnel:

The Murray absence has been well documented, but there are encouraging signs, namely that he took shots before practice and participated today. There is an indefinite beauty to the term “indefinite.”

Murray on how he feels and his concussion: "I still need to talk to the doctors, but I felt good out there… I wear the best helmet you can get. It's a fast game and sometimes things happen." pic.twitter.com/qDUyzBOq5i

Another notable absence is Olli Maatta, who will get a chance to reflect on his play from the press box. Nothing wrong with giving a kid (still a kid) a look at the game from up high, especially as it paves the way for Juuso Riikola to make his NHL debut after making the team out of camp.

Riikola confirms he will play tonight for #Pens. Said his family will be watching in Finland. Asked what he’s most looking forward to in NHL debut, responded simply: “All.” -SK

The Golden Knights will counter with the following lineup:

Pacioretty is a Penguin-killer new to the lineup for VGK. The Golden Knights also added Paul Stastny in the offseason, but he’ll miss tonight’s tilt with a lower body injury. There’s also the curious case of Natejamin Schmidtson, who was suspended for 20 games for trace amounts of a performance enhancing substance.

Should be a party on 5th Ave tonight.