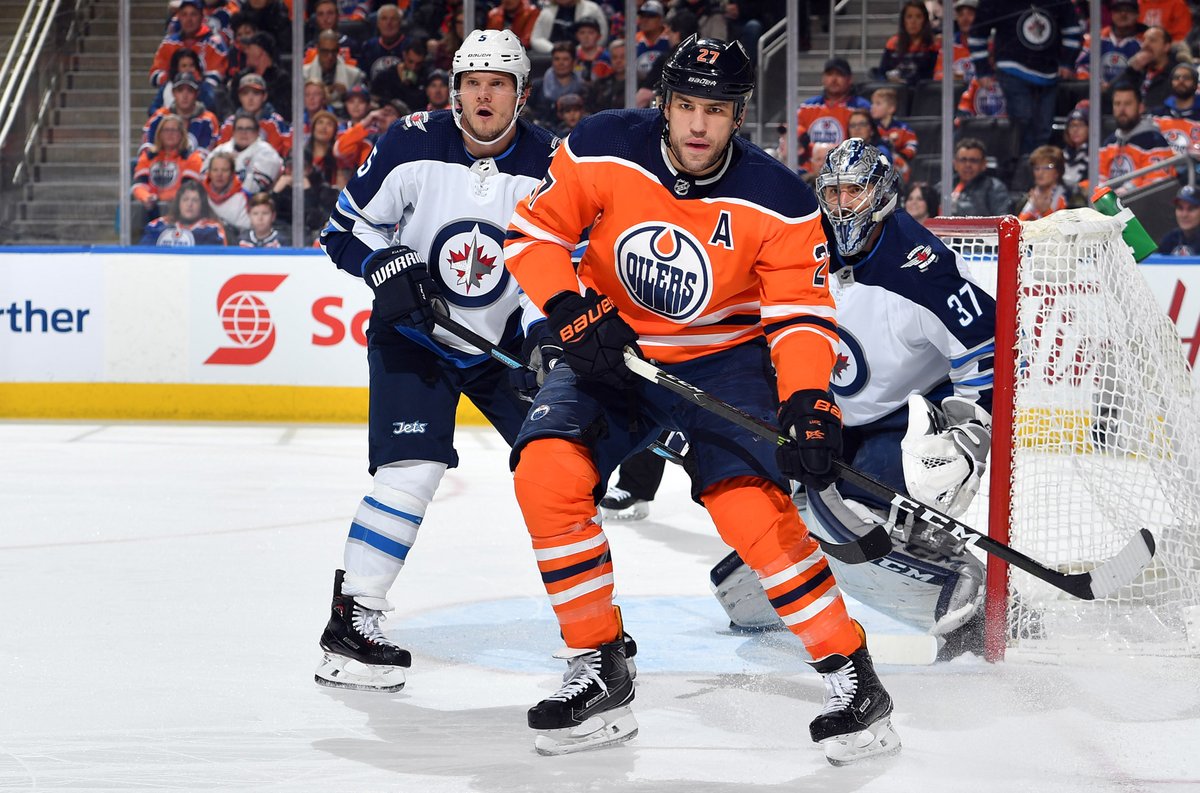 Final game of the road trip…finally! The Edmonton Oilers look to break even on their lengthy season opening four game road trip in Winnipeg as they take on the Jets in the first of three meetings between the teams on the season.

Edmonton returned home from New York with two points under their belt on Saturday night, spending two nights in their own beds prior to flying to Winnipeg yesterday after practice. The group appears more energized, and I expect a more lively effort in this game.

Cam Talbot makes his fourth start for the Oilers, while Connor Hellebuyk gets the nod for the Jets.

Edmonton: Pace, pace, pace! The Oilers have looked slow in their first three games and have struggled mightily to transition the puck. Tonight, against a Jets team missing arguably their best defender, the Oilers need to find a way to quickly move the puck up ice to their skilled forward group. Do that, and the offensive chances will come.

Winnipeg: Use your size to make Edmonton’s defense uncomfortable and create offense. The Oiler defense hasn’t been as bad as people make it out to be, but overall they are still very prone to making mistakes. Force them into quick decisions, and odds are turnovers and offensive chances will present themselves for the home team.

Edmonton: Matt Benning returns to the lineup tonight and absolutely has to play well. Benning simply hasn’t played at an NHL level this season, and is dangerously close to losing his roster spot. He’s been a liability thus far and must find a way to capture what made him so good in 2016-17. This is a big game for him. The talent is there, but he needs to play like it.

Winnipeg: Kyle Connor is the best player you don’t know about in Winnipeg. He scored 31 goals as a rookie in 2017-18, and already has four goals in five games this season. He’s a dynamic goal scorer and is extremely dangerous. Oiler fans need to keep their eyes on him tonight.

As mentioned above, Benning returns to the lineup after sitting out on Saturday afternoon. Evan Bouchard, who has played well so far, will sit. A lot of people don’t like that decision, but Winnipeg’s forecheck is ferocious and would have given the rookie a lot of problems.

Up front, the forward group remains the same as Saturday, meaning Alex Chiasson and Zack Kassian will sit up top.

No Dustin Byfuglien tonight for the Jets, who is battling injury. Joe Morrow, an Edmonton native, will jump into the lineup to replace him. Nic Petan, recently recalled from AHL Manitoba, and Kristian Vesalainen will be the healthy scratches up front. Old pal Laurent Brossoit will dress as the Jets’ backup.

Its been back-to-back sweeps in this series over the previous two years. The Oilers swept the Jets in 2016-17, while the Jets returned the favor with three dominating wins a season ago. The team that swept the series made the playoffs in both years, while the team that was swept was golfing by the second weekend of April.

These two teams met in a similiar spot a year ago in Edmonton. The Jets were 0-2 and struggling badly, but came to Edmonton and beat the Oilers in dominating fashion. The Jets were off and running after that, while the Oilers were just beginning a nightmare season. The Oil will try and return the favor tonight.

Things are about to get very tough for the Oilers. Tonight marks the first of six straight games for the Oil against teams that had at least 100 points a season ago. After this, it will be a date with Boston on Thursday before hosting Nashville, Washington and Pittsburgh. The stretch closes a week from Saturday in Nashville.

Edmonton looks a lot better tonight. Getting home helped give this team a little juice, and I suspect we see a looser team now that the Oil have a win under their belts.

They finally get a goal that doesn’t involve McDavid as Jesse Puljujarvi opens the scoring, giving the Oilers a lead they do not lose en route to a 3-1 win. Khaira and Lucic grab the other Oiler markers, while Trouba scores on the powerplay for the Jets.