Grading the Packers Offense Through the Bye Week 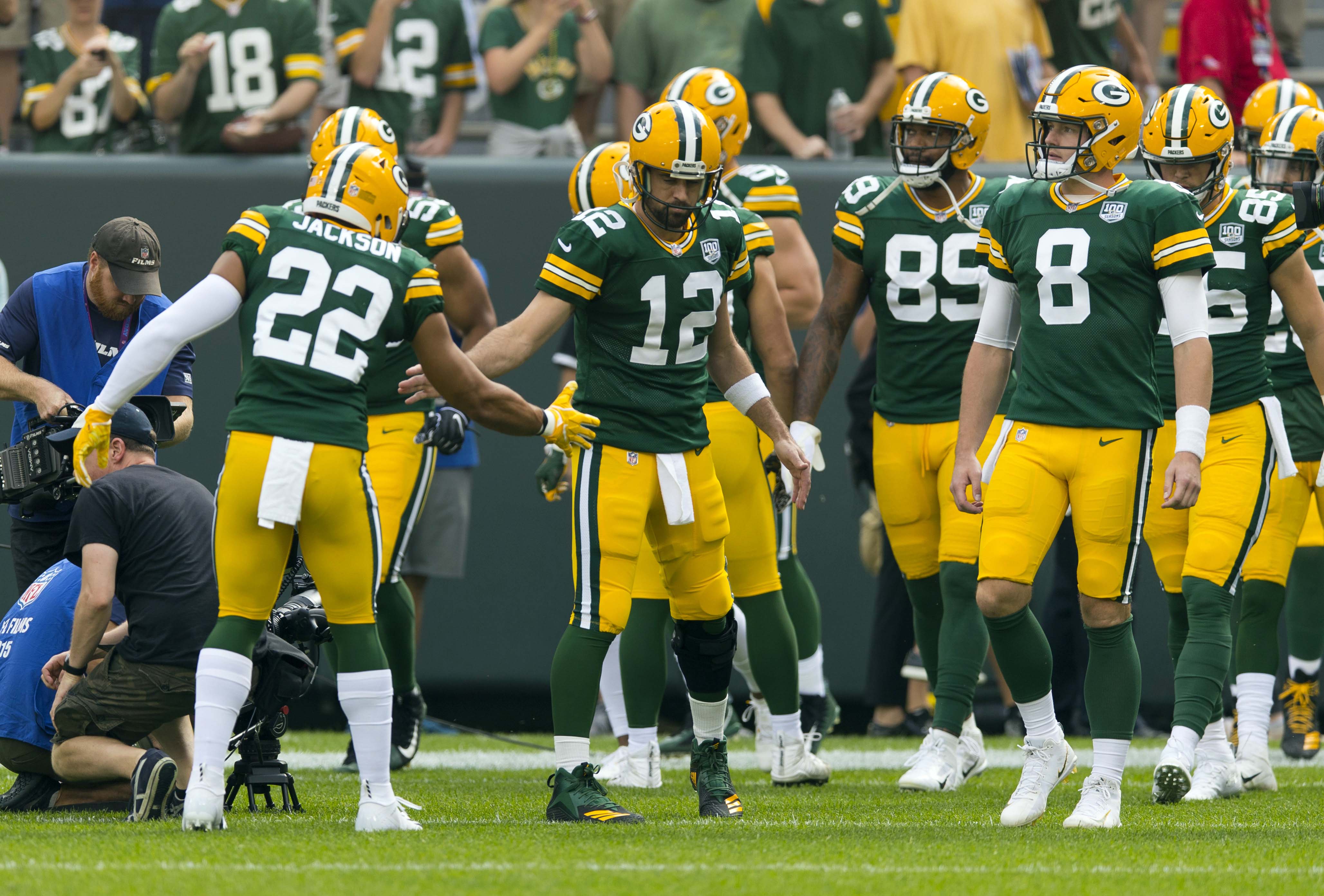 Grading the Packers Offense Through the Bye Week

The Green Bay Packers enter their bye week with a 3-2-1 record. The Pack has not been a well-oiled machine through their first six games. Two of their wins (vs. Chicago and San Francisco) required dramatic comebacks while the Packers blew a sizeable lead during the tie game against Minnesota.

The one thing the offense has lacked overall is consistency. There is a lot of talent on the roster, but the offense has yet to hit its stride over the course of an entire game. Injuries have certainly played a part as has the adjustment to the revised offense under new offensive coordinator Joe Philbin.

Grades here are based on a combination of expectations and performance. Grades are listed for units with individual players being discussed in each position group.

Aaron Rodgers was injured in the first half of the season opener and while he has still been spectacular at times, his consistency has been affected by his injured knee.

Rodgers has not been as accurate as he has been in the past. He has missed many throws that were easy completions for him when he’s healthy.

The fact that Davante Adams has been the only familiar receiver in the lineup for roughly half the games played this year hasn’t helped. Rodgers has done a good job of encouraging the rookie wideouts to learn the offense and to improve their games. The result was a 100-yard receiving game for Marquez Valdes-Scantling in Week 6.

The Packers are a below average team without Rodgers. He is the definition of a franchise quarterback. Rodgers has been good this season but not consistently excellent. There is room for even better performances from Rodgers if his knee improves and as he gets more comfortable with his new receivers.

DeShone Kizer made one brief appearance in Week 1 against Chicago. He threw one untimely interception and lost a key fumble that killed a drive.

The Packers running game is ranked 17th in the league with 103.7 yards per game. That isn’t bad when you consider how far behind they’ve been in the games against Chicago, Washington and Detroit which meant the Packers had to pass on almost every down for large portions of those contests.

Aaron Jones missed the first two games of the season due to a suspension, but he’s been the team’s best runner since his return. Jones is averaging 5.9-yards per carry. Unfortunately, Jones is only averaging eight rushing attempts per game since his return as head coach Mike McCarthy insists on rotating all three of his running backs.

Jones’ weaknesses are in pass protection and receiving. His failure to pick up the right blitzer or to be in the right position on passing plays have helped keep him off the field.

Jones needs to improve his play when he’s not carrying the ball and the Packers need to find a way to get him the ball more when they run the football.

Jamaal Williams has gotten the bulk of the carries, 59 rushes in six games. He’s averaging 3.8 yards per attempt and has a long run of only 11 yards. Williams is steady but not dynamic. He is the best of the three running backs at picking up blitzes and McCarthy trusts him the most for that reason.

Ty Montgomery is the best receiver of the trio and is averaging 4.1 yards per carry. He leads all running backs with 14 receptions. The Packers need to find a way to get Montgomery more involved in the passing game as he can be a dangerous weapon out of the backfield and a good safety valve when the rush pressures Rodgers.

Davante Adams has clearly established himself as the Packers top receiver and he leads the team in all categories. He is on pace for a 125-catch season. Adams has size and uses his body well to get position on defenders and stay in bounds. Rodgers trusts him more than any other receiver. Adams is the player Rodgers turns to when he needs a big play and the Fresno State alum usually comes through. He is on his way to becoming one of the game’s best receivers.

Randall Cobb played only three games due to injury. He was outstanding against the Bears and had a terrible game in Washington. Cobb is versatile and reliable and dangerous after the catch. The Packers will benefit from his return which should take place after the bye.

Geronimo Allison was a question mark entering the season but proved himself to be a good third receiver. He stepped up when Cobb was out of the lineup and has a knack for making big plays. Allison has a healthy 15.2-yard average and has been a valuable contributor when in the lineup.

The three rookies have struggled at times as expected but have shown their ability and talent when given the chance. Marquez Valdes-Scantling has earned Rodgers’ trust more than the other two. He had his first 100-yard game against San Francisco. He has 12 catches for 212 yards and has learned the offense quicker than his fellow first year players. Equanimeous St. Brown has excellent raw ability and made a clutch catch late against San Francisco that kept the drive going and stopped the clock. St. Brown has made only four catches but will be able to do more as he becomes more comfortable in the offense. J’Mon Moore is taking the longest of the three rookies to adjust to the NFL. The Packers expect to see more from him after the bye week.

Jimmy Graham had his best game of the season against San Francisco. He appears to finally be more familiar with what’s expected of him in this offense. Graham has clearly lost a step since his prime and is no longer a game breaker, but his big frame and reliable hands still make him a good tight end at this stage in his career.

Lance Kendricks has been inconsistent. He has dropped too many passes, including a few in key situations, but five of his seven receptions have resulted in first downs. Neither Marcedes Lewis nor Robert Tonyan has seen the field much on offense. Lewis was expected to add help blocking but his role has been very limited.

The offensive line has struggled at times, especially blocking for the run. Rodgers has also faced more pressure than he is accustomed to, in part because he hasn’t had his full mobility since being injured in Week 1.

The starting tackles are the strength of the line. David Bakhtiari is one of the league’s best pass protectors. Bryan Bulaga has struggled with injuries throughout the season and may be starting to wear down a bit after nine years in the league. He is still a good pass blocker and is very gutsy playing through a litany of injuries to stay in the lineup. Bakhtiari and Bulaga rarely need help and that gives the offense more flexibility to send players out in pass patterns or to pick up inside blitzers.

Corey Linsley is a reliable center who is good in space and blocking at the second level. Lane Taylor is steady and smart but is not a standout in any area. Justin McCray got injured and lost his starting job to veteran Byron Bell. Bell has looked much better than he did during the preseason and is now comfortable and familiar with the offense. He is more reliable than McCray, but right guard is the biggest weakness on the line.