Your Morning Dump... Where Jayson Tatum has "been working for this" 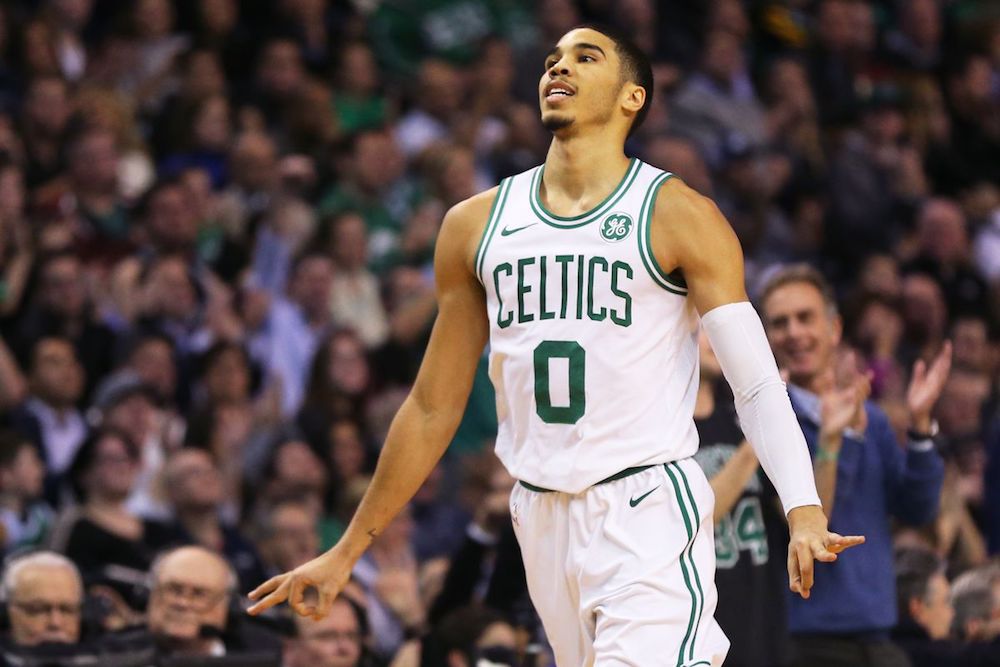 Your Morning Dump... Where Jayson Tatum has "been working for this"

He was not born that way. Tatum’s unflappable demeanor has been cultivated by two vigilant parents, both college athletes, who raised Jayson separately but who were united in molding their son’s future. Yet even they could not have envisioned how quickly his maturation process would need to accelerate. In rapid succession, he was asked to become an integral part of a contending NBA lineup, became a father before his 20th birthday and now has to live up to the sophomore NBA hype that has landed him coveted endorsements that include Gatorade, NBA2K, Fanatics and Beats.

The bull’s-eye on his back looms large as Cavs coach Ty Lue declares he has “no ceiling offensively” and Irving claims he can be a “generational player.” Tatum knows year two as a one-and-done phenom presents its share of pitfalls; not everyone can pull it off the way Irving, Anthony Davis and Kevin Durant did (just ask Michael Carter-Williams).

Too much too soon?

“No,” says his mother, Brandy Cole-Barnes. “He’s been working for this.”

ESPN — Thrust into the spotlight, Boston’s Jayson Tatum is ready for primetime

Jackie Mac bookends her wonderful feature on Jayson Tatum with two tales of pre-game festivities before important Celtics vs. Cavs games last year. The first is in Cleveland on opening night, and the second is in Boston minutes before the start of game seven of the Eastern Conference Finals.

The second Tatum is pretty much the Tatum we saw against Philly two nights ago: A bad Mother F’er who already looks like he belongs in the upper crust of the NBA’s elite.

How did he transform so quickly? First of all, it’s clear from the story that Tatum has an incredible support network. His mother is an absolute force — graduating law school while caring for Jayson when he was a child, she’s still an integral part of his life. His father helped harden him on the basketball court as a youngster by throwing him into the fire with older, more talented kids. And he landed on the perfect team to help foster his growth, with veterans like Kyrie (who is referred to in the story as his mentor) and Al Horford, a coach like Brad Stevens and a stable organization.

All of those ingredients, combined with absurd talent aided Tatum as he rapidly evolved from nervous rookie to go-to scorer in a pivotal game seven during the same season, all while becoming a dad at age 20.

It feels like we’re all along for a ride that’s headed towards its destination far faster than we ever could have imagined. Many of us were on this ride with Paul Pierce, and know that it was in no way the most direct route to stardom. A lot can happen, but this ride with Tatum seems like it may be far more direct.

On page 2, we appreciate all that Marcus Morris is

“Everybody has to do their role exceptionally well,” Stevens said. “But we’re asking more of Marcus Morris than we are a lot of guys. Because he’s a guy that could be playing 32, 34 minutes a night, starting, and playing a lot for … for a lot of places. But for us, we need him to come in and do exactly what he did (Tuesday).”

Morris understands playing time for him as well as his teammates, will fluctuate all season.

“I’m a veteran,” he said. “I’ve been around. This is my eighth year so I see that we have a special team.”

And for someone as competitive as Morris is, that makes the idea of having his minutes remain in a constant stat of uncertainty a much easier pill to swallow than it would be for another team that wasn’t as close to winning a title as the Celtics are.

“It can come down to 20 minutes, 15 minutes so just try to change the game some type of way with the time I’m given,” Morris said.

And it is that open-minded approach to playing that Stevens believes speaks to who Morris is as a person and as one of the leaders on the team.

“He doesn’t get enough credit for what he does for this team from a leadership standpoint,” Stevens told NBC Sports Boston

Brad Stevens offered such effusive praise of Marcus Morris after game one of 82 of the 18-19 regular season, that if you just took the quotes in isolation and asked a fan when they came from, they’d probably guess last year’s playoffs, or Morris’ retirement ceremony.

But if you’ve followed Morris’ time in Boston you can tell that Brad Stevens both really does appreciate all that Morris does and sacrifices for the team, and knows that Morris needs this type of praise and appreciation to continue doing it.

Marcus Morris is not one to hold back, and so as you look across this loaded roster for guys who might grumble about lack of minutes, Morris would seem to be one of the favorites to offer up a controversial quote this season. At the same time, Morris himself knows that he might not get the chance to play for a team like this again (if he wants to cash in, he’ll likely be the third or fourth option on a pretty mediocre team) and that being a good teammate and veteran leader(which he absolutely has been) and excelling in his role will pay off handsomely in free agency.

Stevens knows that Morris is only human — he’s a talented player who could score 20 a game and start elsewhere, and so Stevens not only lets Mook be Mook when he’s on the court, but offers him extensive plaudits when talking to the media. I don’t want to make this out to be some sort of jedi mind trick, or imply that Stevens’ praise of Morris is insincere, but it definitely is intentional.

Morris is sacrificing a lot, and Stevens wants him to know that he gets that and appreciates it. Whether it’s inviting Morris up during a post-game press conference before the super bowl last year, or showering praise on him after the first game of this season, Brad understands how to get the most out of Marcus Morris.

And if we’re being honest, there are going to be nights this year where the Cs look like they’re going through the motions and Brad will signal down the bench to Morris, who will be ready to inject life and attitude into the team. Marcus Morris needs this season on the Celtics, and the Celtics need Marcus Morris. Even if it’s just for one more year, it’s a beautiful and underrated partnership.