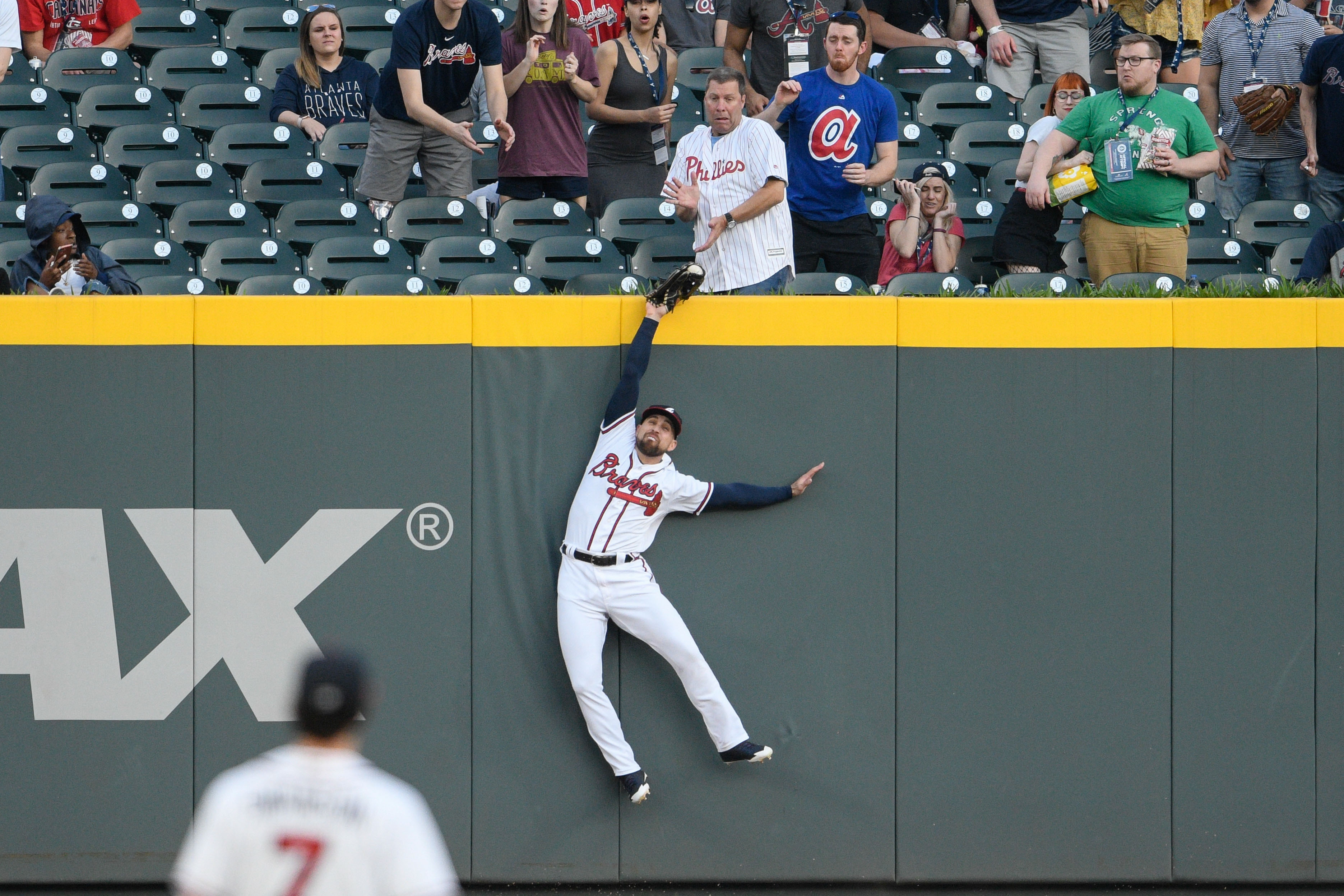 There. I got that out of the way. Don’t hate on me for what I’m about to say, the proposals I’m about to make, or the amount of ineptitude that you think I’m spilling about your favorite player as I’ve already admitted he’s good.

Yes, he’s blocked nearly every Braves fan that’s ever uttered his name on Twitter. Yes, he’s a huge cheerleader for himself. Yes, his eyebrows express more emotion than Groucho Marx, and he likely drives me more crazy than anyone else on the current team.

But he’s a good baseball player, likely a really good dude, but I’d like to see him get traded.

Ronald Acuna has been a center fielder since he began his professional career. He logged ~1300 innings in the MILB in center compared to ~300 in left and ~400 in right. At the MLB level, he’s played LF almost exclusively and has looked wonky at times out there. However, when in CF, he’s looked incredibly comfortable and really uses his speed to cover ground rapidly. That’s what the eye test tells me and it looks like my eyes see it true on this one as he’s rated well above average in 74.2 innings in CF, while rating about average in LF. Moving Acuna to CF seems like a solid move.

Ender is on an incredibly team friendly contract. He is under team control for the next 3 years a total of 20MM and has a team option for 9MM in 2022. He’s ran 3 straight years of showing good value in CF averaging 3 fWAR with elite defense and a good enough bat. With that contract, he’d be coveted by teams seeking a defensive first outfield captain.There aren’t many places that the Braves can upgrade offensively and moving Acuna to CF and trading Ender for an OF thumper makes a lot of sense. Braves have the luxury of having 1 good and 1 great CFer on their team, and only 1 is necessary.

With a good contract, the need to upgrade the offense, and an elite CFer waiting to take over for him, trading Ender to fill a need makes a lot of sense.

What to Expect in Return?

As stated above, Ender has maintained a 3 fWAR these last 3 years, and he’ll be playing the next 2 years in his 20s and his final guaranteed year under this contract at age 30. He’s established his value and should likely be looked at as a 3 fWAR player/year for the duration of the contract.

A 3 fWAR player is valued at 24MM/year. Over the 3 year period, Ender will only make 20MM total, and over the 4 year period, 29MM. If Ender continues producing at his current rate, that would be a surplus value of 52MM in 3 years and 67MM over 4.

So, for those that don’t think Ender has much value as a trade chip you’re facepalm-worthy wrong. That is serious surplus value and there will be teams that will pay a good price for his services…like a top prospect or 2 in return, or even a big bopper that plays corner OF.

Seattle Mariners- The Mariners played the silly sauce carousel in CF this year by throwing metrics out the window of their ’55 Chevy and went with Dee Gordon, who’d never played there before. From there, it didn’t get much better and there’s a serious need.

Cleveland Indians- Likely need a reset in their entire OF and Ender could provide the stability they seek in CF.

DENVER, CO – AUGUST 23: Charlie Blackmon #19 of the Colorado Rockies hits a double against the Miami Marlins at Coors Field on August 23, 2014 in Denver, Colorado. The Rockies defeated the Marlins 5-4 in 13 innings. (Photo by Trevor Brown, Jr./Getty Images)

Chicago Cubs- Not sure if they’re going to move on from Albert Almora Jr, but if they do, Ender swoop.

Houston Astros- George Springer was their main CFer this year, but didn’t play it all that well. Jake Marisnick plays a good CF but bat is more iffy than Ender’s.

New York Mets- Like Stephen (@b_outliers) said, the Mets have a billion corners OFers and 0 CFers.

Oakland Athletics- They had a revolving door of players pretending in CF and if they want to make another run, they’re going to need someone that can actually play it.

It’s not you, it’s me. I just need to find myself…

The Seattle Mariners were a good team last year. Ask me how, and I’ll shoulder shrug myself to death. The only offensive player on their MLB team that is remotely interesting is Mitch Haniger and the Mariners aren’t going to fill a hole then create a hole at the same time (well, maybe they will as they make anywhere between 5-6,000 trades a year). But we could look to their farm, right? Currently their farm is attempting to grow in Antarctica where nothing grows except for low expectations, which is where Kyle Lewis is reigning supreme. Sorry Seattle…you will not be the Ender all, be all destination.

The Cleveland Indians might be in trouble unless they can plug the dike that is their disappearing 25-man. They are losing some players this year and have some expiring contracts coming up with options that can’t all be picked up. As is, they are seeing their window close quickly and there’s not much of a farm left after trading several good prospects at 2018’s deadline. Sorry Cleveland, you might need a CFer, but it’s probably not Ender’s Game to come there.

How I determined the value of the trades?

I took the overvalue of Ender’s contract and translated it into fWAR, which at the current market of 8MM/WAR came out to be plus value of 2.1 fWAR/year. From there, it’s research, risk factor (with prospects), projection, and guesswork, but it’s somewhat educated guesswork. The trades are as “fair” as I can make them.

heart of Braves country (Birmingham) in the offseason and I like the chances that he could do good things for 5 years in a Braves uniform.

Gray comes to the Braves after a year in which he suffered at the hand of Coors Field, but brings a high GB-rate paired with a swing and miss stuff. He’s a great buy-low candidate ala Kevin Gausman.

Trades of this magnitude are essential to the Rockies: trading for young pitchers, selling blooming sluggers. This could be simplified into essentially Dahl for Ender if Rockies could add a few small pieces to balance out the cost.

Breakdown: It’s being speculated across Cubs blogs all over that there’s going to be more than 1 OFer traded this offseason. Ian Happ, Kyle Schwarber, and Albert Amora Jr all seem to be on the chopping block and it’s more likely than not that 2 of these 3 are traded. I think it’d be a good idea for the Braves to acquire 2 of these guys then decide to keep both or use one as trade bait. With the weight loss, is Schwarber able to go back to catching, splitting time with Flowers? Doubtful, but it could be a possibility. Either way, Schwarber becomes a regular masher in the Braves lineup and Amora becomes the backup that could play himself into regular time.

Breakdown: Astros get to move Springer back to a corner OF position and Kyle Tucker becomes the Braves starting LFer on Opening Day as Braves try to go back to back on ROTY trophies. Selfishly, this is my favorite option and one trade I really hope they explore this offseason.

Breakdown: Conforto finally gets to flush Flushing and becomes a corner OFer for a team that’s not a constant circus and also has a need for power. Ender….sorry dude.

Breakdown: I really don’t like this trade. In fact, I almost deleted it because it just seems force-fed, but I’ll keep it here. Braves replenish some of the farm with the addition of Lazaro, and both Fowler and Bolt have the opportunity to become the starting LFer this year or next.

What do you guys think? Would you bite on any of these trades? Which one? Do you see value in trading Ender or would you like to keep him? Let’s have a chat!

So you think you know your MMA? You think you can predict who is going to win a fight and how?  Time to prove...