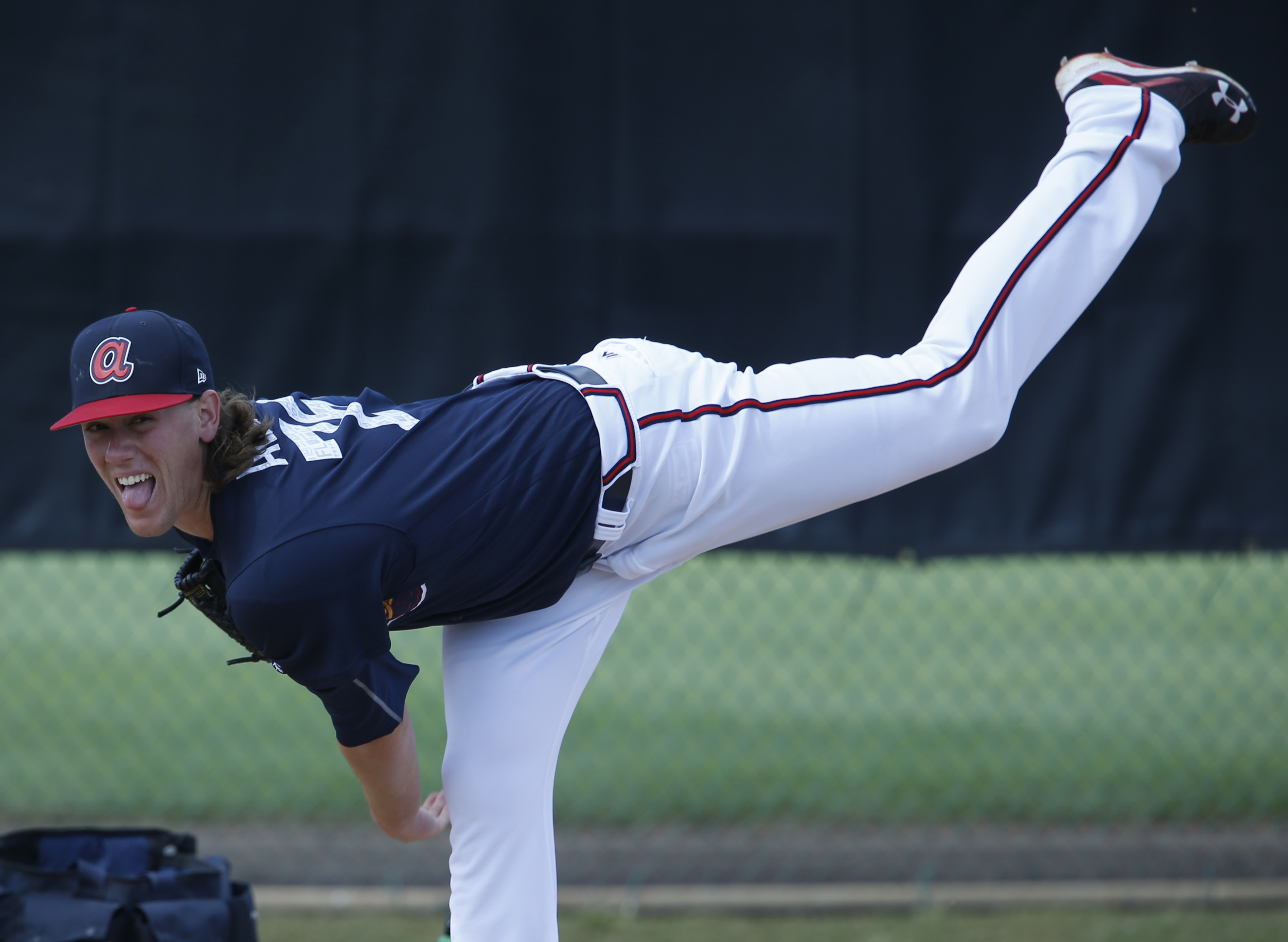 (This continued series recaps Braves still in the organization who played for the major league club in 2018.)

2018: Much like Mike Soroka, Kolby Allard breezed to the majors – skipping High-A last season to be a Double-A All-Star and pitching much of this year as a 20-year-old in Triple-A. He set a personal low with a 2.72 ERA over 112.1 innings with Gwinnett, though his K/BB rate was also a new low at 2.62. Unlike ERA, you don’t want that to go lower. Allard also pitched three games in the majors, including his debut as a starter in a victory against the Marlins. While the results on the mound weren’t great with Atlanta in a limited sample size, he did get his first major league hit, matching his total in 43 career plate appearances in the minors.

Contract Details: Turned 21 on August 13. Will be arbitration-eligible after 2021 at the earliest and could become a free agent following the 2024 season if he doesn’t spend more time in the minors. The Braves manipulated his service time in 2018 to avoid using an option. He was optioned back to the minors after his major debut and was moved up and down from Triple-A to the majors throughout August. All told, after his initial callup, he spent 19 days on optional assignment. For an option to be used, a player must spend at least 20 days in the minors while active and on the 40-man roster. Allard, who was recalled on August 29 and not used again, finished a day short. As a result, he still has all three option years.

Previewing 2019: In many ways, the sheen had already worn off by the time Kolby Allard took the ball against the Miami Marlins on July 31. Once considered by many the best pitching prospect in the system, he’s been passed on those rankings by right-handers Mike Soroka and Kyle Wright among others. It wasn’t really his results on the mound that led to Allard being slotted in the prospect rankings behind Soroka, who was picked fourteen selections after Allard in 2015. It was the perceived ceiling Allard has versus the other arms that passed him last offseason and this season in the rankings.

From a results standpoint, again, it is difficult to do much better than Allard’s 3.18 ERA in Double-A during 2017 and his 2.72 ERA with Gwinnett this year. But with prospects, we judge on ceiling as much as we do results. Why is the ceiling falling? A simple reason – declining velocity. When he was selected out of high school, Allard’s fastball lacked consistent velocity, but was closer to the mid-90’s range on the high end. Over the last few seasons, however, his fastball has been in the 88-92 mph area – also known as the Julio Teheran Discomfort Zone. True to form, he averaged 89.4 mph in his limited run in the majors.

Is fastball velocity everything? No and it can be argued, with very little effort, that we focus too much on velocity over things like pitchability. But Allard, like most pitchers, will live off his fastball to set up his breaking stuff. If he’s getting hit earlier in the count, he can’t get to his plus breaking ball. Further, if the hitter can recognize his breaking pitch in subsequent at-bats, Allard’s lack of velocity means that the hitter can sit on the off-speed/breaking stuff and not have to be concerned with a heater busting him inside.

As a result, Allard’s strikeout rate fell from over 25% in 2016 to 21% in 2017 to just 19.5% in 2018. That’s not including his cameo in the majors when he struck out just three of the 47 batters he faced. Quite frankly, Allard lacks the stuff to put away Triple-A hitters, let alone major leaguers. This becomes even more worrisome because Allard doesn’t live off grounders. He’s going to give up a lot of flyballs. Very few of them became homers in the minors, but hitters rarely miss those juicy 89-mph fastballs in the majors.

What can be done to fix that moving forward? Continued development of his changeup is important. While you want more variety in pitch speed between a changeup and curveball, Allard has worked hard on turning an average changeup into a plus off-speed offering. The young southpaw also may need to develop a fourth pitch – a cutter, sinker, or slider – to try to keep batters off-balanced and have more to show them the second and third time through the order. The good news is that Allard flashes strong pitchability and baseball IQ, which keeps his prospect status alive. As he learns to change speeds better and increases his pitch repertoire, it may give him enough of an edge to be a bottom-of-the-rotation arm or a swingman.

Allard’s fall in the rankings, mixed with Atlanta’s amount of arms, makes Allard possible trade fodder. Of course, the other 29 teams have access to reports on velocity and have scouting reports to compare Allard’s progression from his time with San Clemente High School to now. They see what we see. While it’s possible that a team out there still views Allard as a better pitcher for his strengths than other teams might because of his weaknesses, it seems unlikely that any team out there believes Allard is still the #24th best prospect in the game like Baseball Prospectus did last winter.

Again, Allard could still be a major league arm for the Braves or someone else. For the most part, 21-year-old pitchers with a career 2.93 ERA in the minors who keep the ball in the park and don’t walk many people are considered possible fits for anyone. But if he is to live up to his #14th overall billing, Allard is going to have to prove a lot of “experts” wrong after they dropped him tremendously in their rankings.

Did you know? Allard, who now has a -0.2 bWAR, is already behind in his effort to be the best player selected from a 2015 class that looks better-and-better every year. The top 5 in bWAR from that year’s first round is currently Alex Bregman, Andrew Benintendi, Walker Buehler, Dansby Swanson, and Ian Happ. Fourteen of the 41 first rounders have already made it to the majors with players like Austin Riley just on the outside looking in.

Did you also know? Of the three batters Allard struck out in the majors, two were pitchers. The one non-pitcher? Nolan Arenado, who led the NL in home runs during the season. As a certain twitter account is fond of saying, you can’t predict baseball.