Recap: In which the Magic pester the Celtics into a loss like a long-armed mosquito swarm 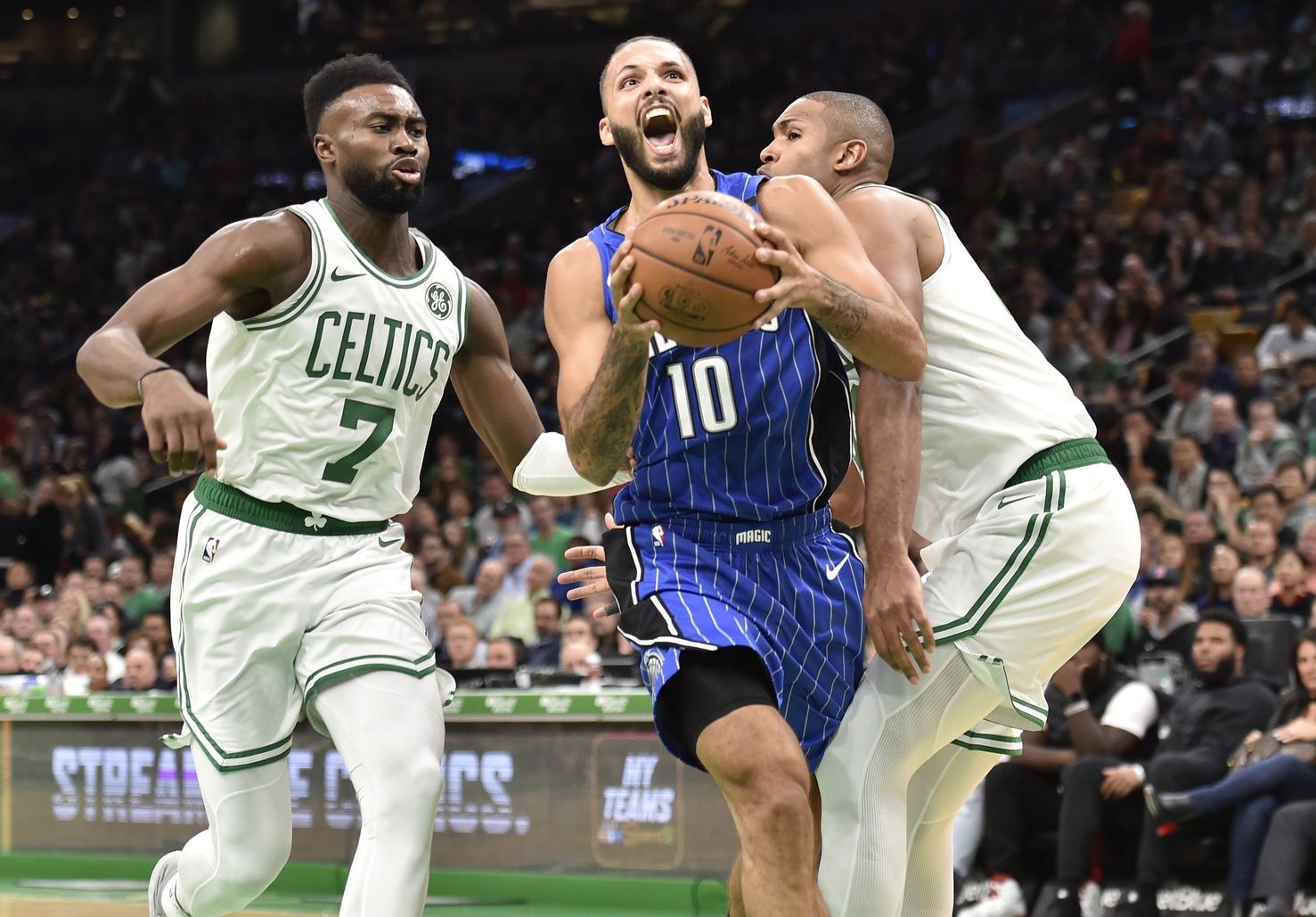 Recap: In which the Magic pester the Celtics into a loss like a long-armed mosquito swarm

The Orlando Magic are the bane of my existence. They haunt me. I loved Penny Hardaway as a kid, and then he got injured and was never the same, and Shaq went to L.A. (I didn’t get to appreciate Grant Hill. Fuck Dwight Howard and fuck Hedo Turkoglu. Just because.)

Also, I find myself not infrequently writing about them, because they also appear to haunt the Boston Celtics. The Cs have given up first halves or entire quarters to this hapless, permanently rebuilding, shell-of-its-former-self, education-destroying-DeVos family-owned squad before getting themselves together and winning (14 of the last 15 home games vs. Orlando have been wins). This time, they didn’t, losing 93-90 in a contest far worse for the Celtics than those final numbers would suggest.

GAME FLOW, PART 1: THE FIRST AND MOST BAD PART

No getting around this: The Magic kicked the Celtics’ asses for the entire first quarter of this contest. Boston’s defense was a perfect crapstorm of disorientation and sloppiness, which stemmed in large part from Orlando’s clear size advantage against an Aron Baynes-less Boston, which Nikola Vucevic exploited to a T. The offense was poor as well, even with a last-second recovery off a Terry Rozier triple to make the frame margin a not-entirely-embarrassing 28-19. It easily could’ve been way worse.

PART 2: ON THE NATURE OF TALISMANS

Kyrie Irving is no longer wearing his headband, and because I am an inveterate lover of the occult, I choose to assign this choice credit for his notably improved performance in the second frame. His scoring game is clearly not where it should be, and he knows that; I’m sure it’s driving him just as nuts as the most vocal fans. But he started slow as a scorer last year, too, before getting into rhythm with this team. If he’s at like, 17 points per game in two months, then we get worried.

In any event, Kyrie removed the headband and decided he wanted to live in Marcus Smart’s shoes for a while. This was to excellent effect, as he began diving for loose balls, stealing aggressively and generally looking angrier. Combined with serious all-around effort from Al Horford, Gordon Hayward and Marcus Smart, the Celtics came back with much more commitment on both sides of the ball and brought themselves within three of the Magic at the half—48-45 with 24 minutes left.

Magic power forward Jonathan Isaac is clearly attempting to take up the mantle of A.C. Green with his fervent interest in pro-abstinence education. All things being equal, this is an opinion Isaac is 100 percent welcome to have, but I have jokes to write and I’m displeased by the final result of this game. To wit: Is Isaac dunking and fiercely rebounding as an expression of his anti-sexual asceticism? Moreover, does he know about the satanist, alcoholic Magic fan who once threw a spent bottle of liquor at stalwart emo-revival band You Blew It! Have they both bathed in the blood of the lamb?

In all seriousness: Isaac was a big part of why Boston ended up taking the L tonight, as his truly impressive wingspan facilitated a ton of Orlando rebounds, blocks, deflections and general defensive obstructions. Between him, Vucevic, Aaron Gordon and Mo Bamba, the Magic were able to take full advantage of their one unadulterated strength, and the Celtics had no clear answer for it. If not for a burst of intensity on both sides of the ball (one that still ended up being too little too late) and a strong second-half showing by Kyrie, this easily could’ve been a blowout. No doubt, the Cs have plenty of adjustments to make in practices and games to come if they want to be a title contender for reasons beyond a conference default.

GREEN FIRE, OR, WHERE WE CHEER UP WITH COOL HIGHLIGHTS:

Every once in a while, Kyrie does an almost-dunk:

Kyrie with the hangtime! pic.twitter.com/D6t9Hziwx3

GH’s shot seems to be improving:

Hayward from the corner for his third 3-pointer of the night! 💦 pic.twitter.com/foLiDcLhxS

If the Celtics had played like this all night, they easily would’ve won. Fantastic ball movement: