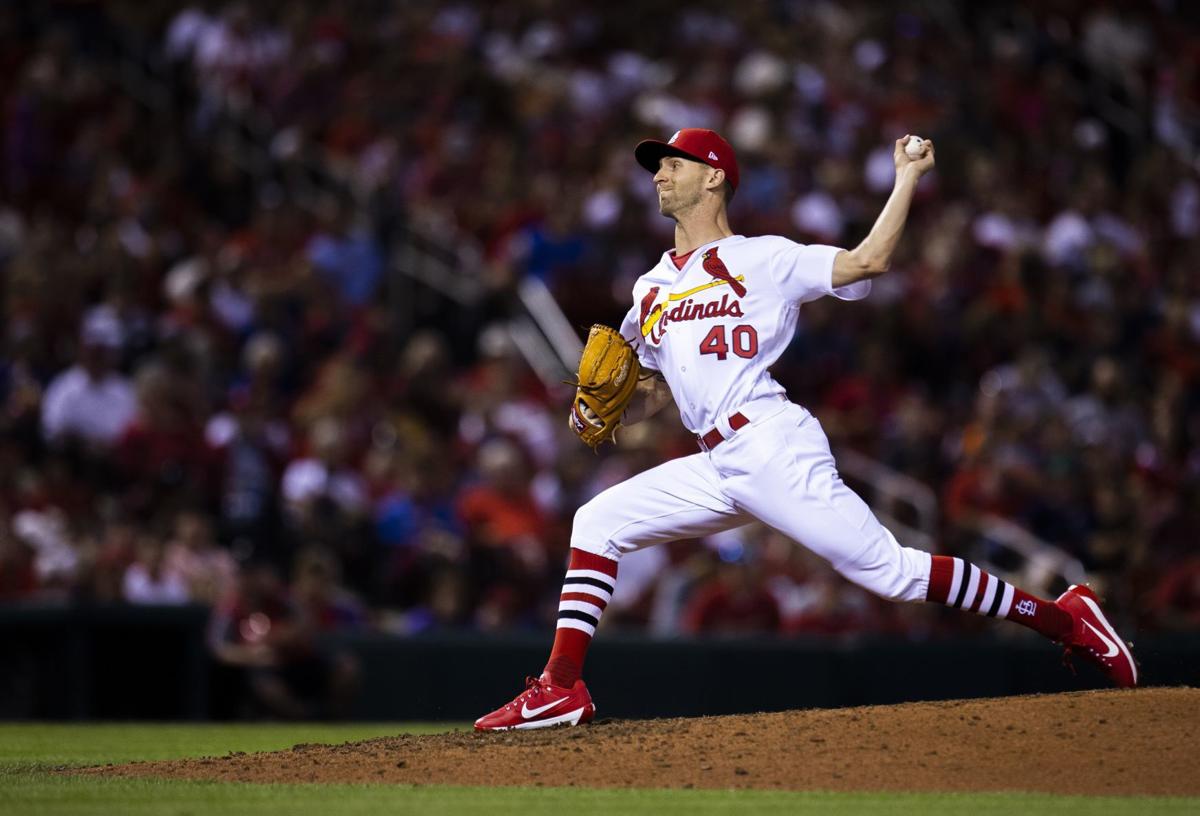 The the overall relief numbers played out like this (courtesy of Fangraphs):

Not great. But, LHP’s typically have better numbers against LH hitters, right?

Well, here are the number solely against LH Hitters.

Still bad. In fact, Gomber and Shreve were actually worse against LHH out of the Cardinals bullpen than they were against RHH.

For perspective on how bad those numbers are, consider how the opponent wOBA and OPS for these pitchers compares to the numbers of hitters around the league.

Major league hitters who had their season numbers fall within those ranges include: Manny Machado, Bryce Harper, Trevor Story, Paul Goldschmidt, Aaron Judge, Freddy Freeman, and Matt Carpenter. That is not the complete list, but you get the idea. When the Cardinals’ left-handed relievers were facing left-handed hitters, those hitters performed at elite levels.

Recognizing the issue and finding solutions

And so the team heads into the offseason with a stated goal to address the left side of the bullpen.

Here’s how John Mozeliak put it in his recent media briefing:

“I also recognize that I think the biggest Achilles’ right now in our bullpen is the left side.”

There will be change in this area.

Now, when you talk about LH relief, big change can be as simple as adding one pitcher, as there are typically just 2 on the roster.

When I look at the current crew that the Cardinals have under control, I see the potential for a solid secondary LHP (think: Randy Flores behind Ray King in ’05. Solid, not dominant.), but the team lacks a true answer for the big time LH bats in the Central Division.

First, Ryan Sherriff. His numbers were fine in a small sample. However, he underwent Tommy John surgery and has reportedly been picked up by the Rays on a minor league deal. He gone.

Tyler Lyons had a terrible year, but elected to take the Cardinals invitation to stay in the organization at Memphis, but no longer a member of the 40-man roster. Part of that may have been a lack of outside interest and a desire to continue pitching. In the end, he has elected minor league free agency and is no longer an option moving forward.

Looking at the numbers, Tyler Webb stands out, especially in effectiveness against LHH. However, that K% of 14.6% vs. LH is far too low. Ideally, you want to see AT LEAST a 20% k-rate from relievers. Webb doesn’t fit the profile of the guy you bring in to face Yelich or Rizzo in a big moment. The lack of strikeout punch leaves you far too susceptible to batted ball randomness.

Webb fits the profile of a 2nd lefty that can be utilized in lower leverage situations and is very effective vs. LH despite not being overpowering. However, it’s worth noting that in his 18 appearances this year, 16 of them were losses. He was used in just 2 high leverage situations, and didn’t fare well. That can be small sample size randomness, but the manager’s usage doesn’t speak well for a player that is on the edge of the 40-man roster and a risk of being released to clear space.

Chasen Shreve brought some impressive underlying numbers over from the Yankees, but failed to show much for the Cardinals. The biggest disappointment was that his career 29% strikeout rate vs. LHH did not carry over, as he struck out just 18.9% with the Cardinals. The potential is still there for Shreve to be a very good LHP, but you can’t go into 2019 with him as you #1 option.

Austin Gomber is the classic case of a reverse split lefty who, being more effective vs. RHH, is best suited as a starting pitcher and not as a left-handed specialist. The numbers bare that out. If he ends up in the bullpen, the best role is as a long reliever, used in the same manner that a RHP would be.

“This year, obviously, was a lost season, and we have to decide if he’s the right answer for us or not. Sometimes a change of scenery isn’t the worst thing for someone.”

Combined with comments made during the 2018 season, it would appear that the Cardinals are about to give up on this investment.

We thought Cecil was bad in 2017, when his numbers were actually ok. Not good, but ok.

There is no doubt that the Cardinals will gauge interest in him from other teams this winter. They would likely deal him for any cash return and pick up the vast majority (at least $10M of his remaining $15M owed) to clear a roster spot for an upgrade.

If they can’t find a trade partner — and Cecil would have to approve, as he has no-trade protection — then they likely hang onto him until spring, see how he is throwing, and then make the decision on whether to eat the money or not.

A turnaround would be a pleasant surprise. They aren’t going to count on it.

Looking at the free agent market, there are a couple of flashy names available. The top of the class features Zach Britton and Andrew Miller.

Both have had injury issues over the last two seasons. Both will command big salaries based on past dominance.

Of the two, I would look at Britton and avoid the older and (from appearances) more broken-down Miller.

Long story short, even though he has some surface level success, the peripherals are trending the wrong direction.

We saw what happened the last time the Cardinals invested heavily in a once dominant LHP, coming off his worst season in relief (see above: Brett Cecil).

Sipp will come at a high price following a career year. Diekman wasn’t very good, and terrible vs. LHH in 2018.

Wilson was solid and will command at least $5M. Depending on the years he is asking for, he could be a player to consider. His career K% of 26.2% would be a welcome addition to a Cardinals bullpen that ranked 29th in K% during the 2nd half of 2018.

An interesting option is Jerry Blevins, who may not be able to demand the same $6M salary he had in 2018 after a really bad year. However, we know the Mets were a disaster and Blevins has been very good as recently as 2017, especially against LHH (career: .210 average, .586 OPS, 28.7% K%). If he could be had on a 1-year deal for 3-5 million, it may be low-risk enough to bring him to camp.

Similarly, the Cardinals could pursue Jonny Venters, a veteran lefty looking to cash in on a successful return to the Majors after injuries caused a 5-year gap in his career. He posted solid overall numbers in 2018 and held LHH to a .131 average while striking them out at a 24.2% clip. Similarly, if he could be brought in on a short-term deal for Bud Norris money, he would be an interesting arm.

A final option is to bring back Tommy Layne, a veteran who spent 2018 having a very good year for the Memphis Redbirds.

Unfortunately all of these options come with some level of uncertainty. There are no sure things on the free agent market in this category.

The first wild cards are internal options that have yet to make their major league debut.

The first is Genesis Cabrera, brought over from the Tampa Bay Rays in the Tommy Pham trade. Cabrera has impressive stuff, and has the chance to eventually be a MLB starter, but he may find his first assignment out of the bullpen. His high 90’s fastball and good secondary pitches could turn him into an under the radar weapon.

The second prospect is Evan Kruczynski, a 2017 draft choice who ascended to AA in 2018, pitching well, and is now pitching in the Arizona Fall League. Kruczynski has been a starter and will likely stay on that path — either returning to Springfield or moving up to Memphis — but he is at least a name to remember when this competition opens up in Spring Training.

The final wild card is the comeback of Rick Ankiel. The former phenom is making a genuine effort to return to the mound at age 39. He feels that his fastball still has enough life to hang in the big leagues and that his signature curveball can be a weapon in relief. The best he can expect is a minor league contract with a spring invite, and that might as well come with the Cardinals. Jen Langosch states that “Mozeliak confirmed that he “had a nice discussion” with Ankiel a few weeks ago about the left-hander’s future plans. The two plan to touch base again this winter.”

There is no risk in giving Ankiel a look in the spring, and if he can still spin the curve and keep a fastball around 88-90, he could actually be a viable option. If the curve is still there, it could be an equalizer against LHH.

All of that, however, remains to be seen.

Solution: Throw numbers at it

Because of the lack of certainty, I would recommend that the Cardinals simply throw numbers at the issue. However, unlike the cast that was trotted out last season, they must start with a better group.

Depending on how desperate the Cardinals get for 40-man space with Webb and whether anyone is interested in Cecil, they should come into Jupiter with a wide open competition between these names:

Surely 2 legitimately good choices will emerge from that group.

They could also find a superior option via trade, which alters this conversation, but that is much more difficult to gauge.