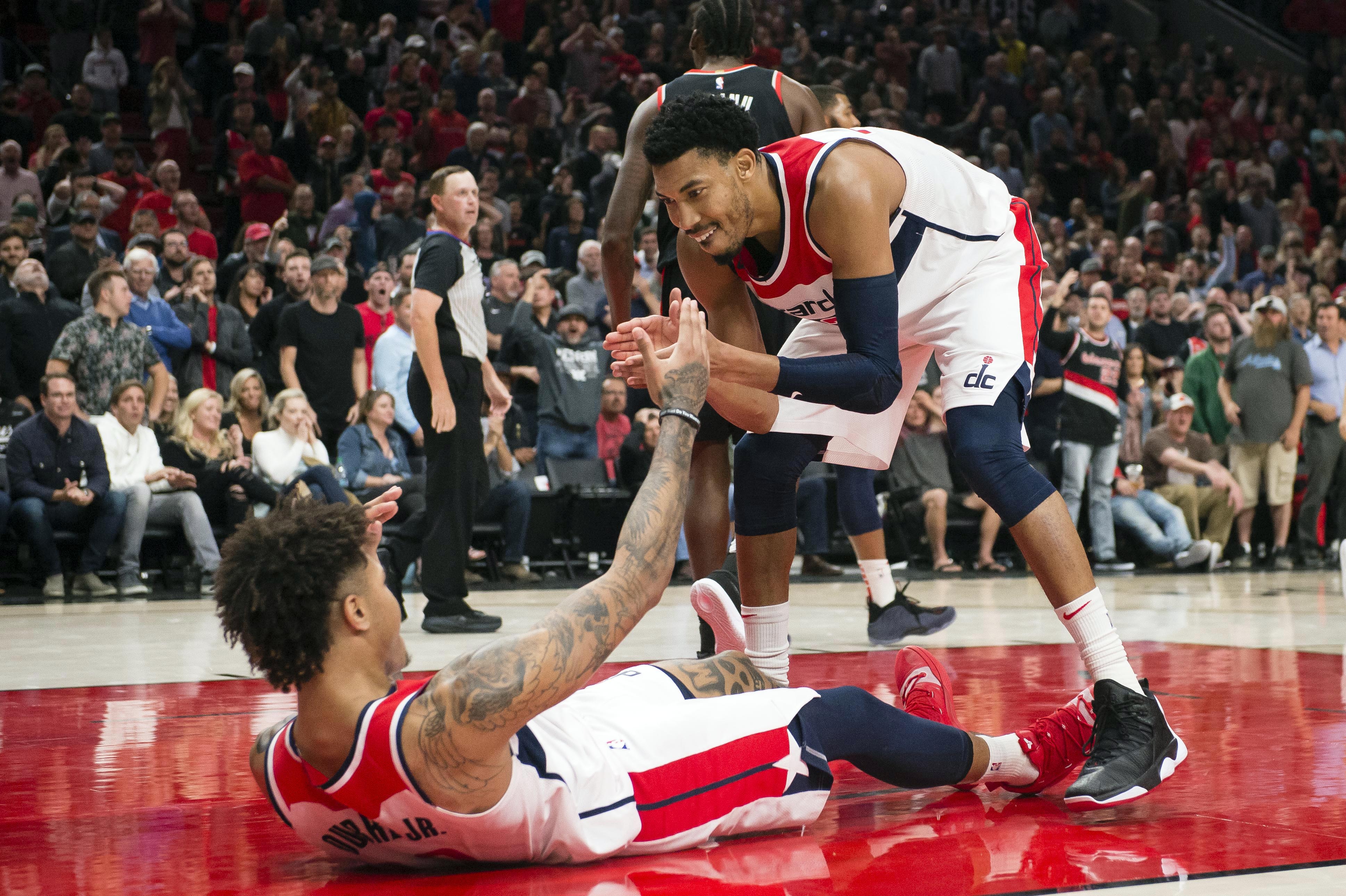 What. A. Game. That was a rollercoaster of a contest that needed overtime. Unlike the previous two games, there were no #SoWizards moments on Monday night. Where do we begin? House of Guards John Wall and Bradley Beal looked good. Markieff Morris redeemed himself in the biggest and possibly unlikeliest of ways. And Kelly Oubre Jr. was a man possessed.

“It was a great win for us. A lot of good plays. Finally, the ball bounced our way. The first two games could’ve easily been a different outcome but I thought our guys competed. We were obviously short-handed, a couple of our bigs were out… Our guys battled,” said Wizards head coach Scott Brooks.

John Wall called game late in overtime, hitting a bank-shot jumper to put the Wizards in the driver’s seat. Then Otto Porter Jr. hustled to the delight of Brooks to block a driving layup from Damien Lillard to seal the win.

We can do a lot of takes on this one but here are the three biggest.

The Wizards started with a small ball lineup in the second frame and ended that quarter with a tie score at 62 heading into the locker room. Big credit goes not only to Beal but also to John Wall for helping carry the team. In my opinion, the runs the team put together gave the Wizards the confidence they needed for an energetic second half and beyond.

The Wizards trailed by 10, 42-32 with 9:14 to go before they began a big run. It began with Beal hitting a jumper and banging a three. It continued with Otto Porter Jr. hitting a turnaround fadeaway and a pair of free throws. Wall got fouled during the run and hit his first free throw but missed his second. He redeemed himself with a driving layup from Wall tied the game at 44, capping a 12-2 run.

It didn’t stop there. After Damien Lillard hit what looked like his 100th free throws of the game (it wasn’t) to go back in front, Beal answered with a three to put the Wizards ahead for the first time since the beginning of the game.

Both teams traded baskets from there on out and the score was deadlocked at 62 at the half. There was a pleasant surprise in the lineup to start the second half, which brings us to takeaway number two.

From Wave Papi to Tsunami Papi

Kelly Oubre Jr. was in a weird spot to start the second half. With starting center Ian Mahinmi exiting the game due to back spasms, Oubre lined up at the center position with other four primary starters (Wall, Beal, Porter, Markieff Morris). Oubre got a big confidence boost playing with the top dawgs and it showed in his hustle and overall play.

In Oubre’s first two games, he shot a combined 5-of-16 and only hit one of his seven three-point attempts. Both of those games saw Oubre reach just single digits in points with nine and eight, respectively.

On Monday night, Oubre led the reserves with 22 points on 9-of-13 shooting and hit all three of his three-pointers that he took in 39 minutes of action. Rebounding has been the Wizards biggest weakness so far this season, which cost them the first two games, but Oubre wasn’t having it. He had six rebounds, five on the defensive end and stole the ball and blocked a shot.

Major MOOD after Kelly Oubre comes through with 22 points on 9-13 shooting including 3-3 from deep. pic.twitter.com/gp1dtwN1mj

Markieff Morris Can Shoot (a lot of) Three’s

Like Beal, Markieff Morris loves playing in Portland and had a history. In the 2016-17 season, Morris drained a game-winning, buzzer-beating three. Morris was clutch again when the team needed him the most. In the season-opener, Morris failed to box out Kelly Olynyk and secure a rebound. He more than redeemed himself in the third game.

Last season in Portland, Markieff Morris put his nuts on the line (for the second time) to deliver an overtime win.#Wizards needs him to come through again tonight against the #Blazers. pic.twitter.com/bFd85PvQ2X

Morris finished with 28 points in 25 minutes of action, shooting 9-of-15 from the field and coming down with nine rebounds. It was his performance behind the arc that made the difference as he hit a career-high six (!) threes on 10 attempts. Two out of the six came in overtime, the biggest coming with 38.5 seconds left that extended the Wizards’ lead by four.

“That’s a good thing that we have with Keef. He can play bigger guys if they have a big guy or he can play small or post up like he did on (Maurice) Harkless. He, John, and Brad, they’re great players and they can find open shots for our guys and they need that. Our guys need those guys who can attack and find open shots for them and Keef stepped up with big three, after big three, after big three. It’s a great thing for our team to see because you have your best players, have confidence in the guys that do a lot of the dirty work and get things done for us and they made the pass without any hesitation and Keef took the shot without hesitation,” said Brooks.

This was a confidence booster from Keef. He needs to rekindle that #DeathRowDC magic and continue to step up in Dwight Howard’s absence.