Recap: Celtics overcome abysmal first half to triumph in OKC 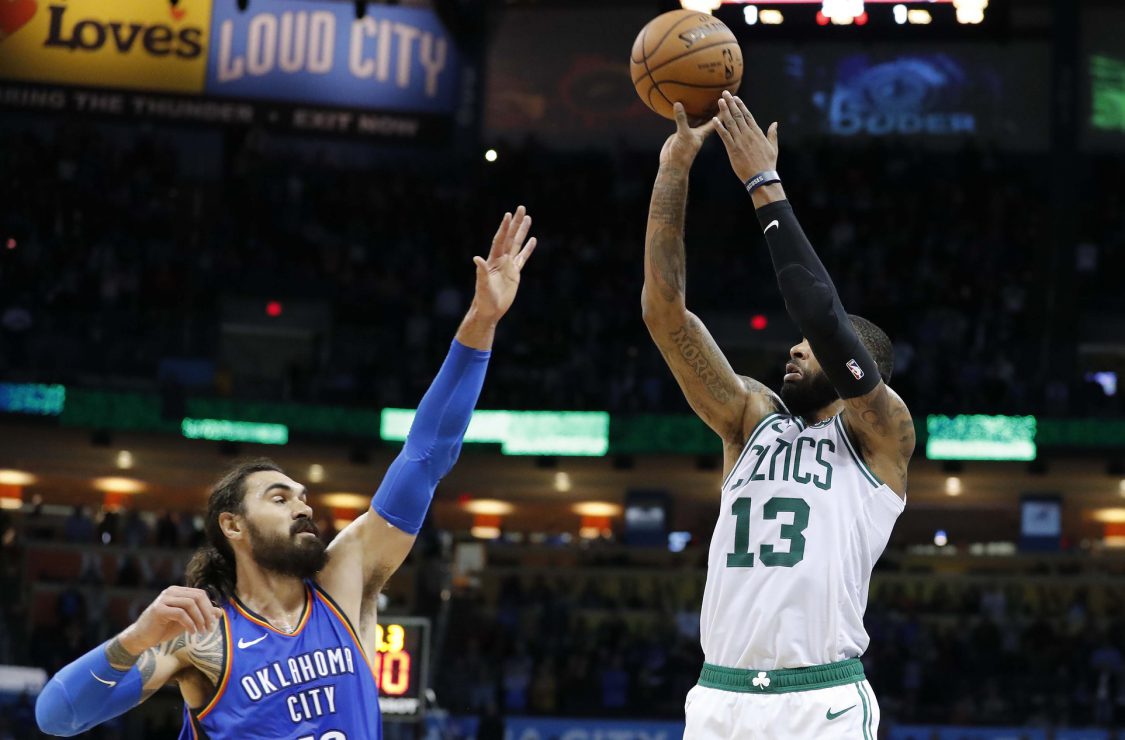 Recap: Celtics overcome abysmal first half to triumph in OKC

As of this evening, according to Basketball Reference, the Boston Celtics lead the NBA in defensive rating per 100 possessions and opponent points allowed per game. They are also dead last in in offensive rating per 100 and second to last in points per game. Their 2-2 record is solely based on defensive proficiency—and, in the Knicks game, a fair bit of luck. The Orlando freaking Magic torched them worse than the Raptors did, and in the first quarter of this contest vs. OKC, it looked like more of the same. Only by virtue of defense were the Thunder up by teens rather than 20-plus.

Should we be worried about this? I’m not worried, this is f—

I mean, it is fine. This is the fifth game of the season. Just because the NBA year starts in mid-October now doesn’t make any panic occurring right now less unearned. Right? Totally. Look at this pretty dunk:

OK, this is starting to get bad. The shots still aren’t going in; Kyrie looks like he might be feeling a tidbit of knee pain and just missed consecutive free throws, which never happens; GH isn’t even trying to shoot, though he’s rebounding reasonably and putting in serious defensive effort; Uncle Al is fouling a ton and looks kind of tired. Also Jaylen Brown’s rough start to the season might be troubling me more than anything else with this team. Only Tatum is keeping the Celtics even halfway alive. Boston is down 16 at the half—50-34 Oklahoma City—and shooting 0-11 from de—

At least Westbrook is also shooting poorly, though he basically always does that and it didn’t stop him from winning the 2017 MVP over Point Harden and God Disguised as Kawhi Leonard, because triple-doubles though—

And then, with all the sudden orgastic joy of Sir Galahad riding suddenly into the kingdom to bring peace and prosperity amid grim horrors and goat-demons named Alex Abrines, the three-pointers came. Eight in number for the quarter, beautiful as the night, terrible as the moon. Westbrook barely has more points than Stevenadamwhodrinks69beers (ask @HebertofRiffs about it) and is shooting with far less efficiency. The Celtics would, when the smoke cleared, have scored more points in the third quarter (40) than they did in the first half (34). Horford hit three triples en route to 19 in the game while Tatum nailed fadeaway after layup after free throw without seeming to attract much attention. I’m not sure quite why, but it felt like Horford and Marcus Morris were drawing defenses in more, especially the latter due to his ISO-heavy tendencies. (Tatum’s biggest highlight play came in the quagmire of the first half; more on that later.) For approximately 20 seconds, they had a two-point lead, but they were most definitely not out of the woods.

If Boston were to end up losing this game, it wouldn’t have been the worst thing. They proved they hadn’t lost their ability to regroup after messing up, something that didn’t look within their repertoire in the Orlando game. PROCESS OVER RESULTS KAIZEEEEEEEEEN. During most of the fourth, it looked like we were heading for what a smart coach—Popovich, Stevens, Spoelstra, Doc, Gentry, Kerr, Dwane Casey in the regular season—considers an instructive loss and a lesser or more insecure coach—Thibodeau, Brooks, Donovan, Scott Skiles, Dwane Casey during the playoffs—obsesses over as one does as personal slight. And given how far we’d come from that putrid first half, that would’ve been OK.

That’s why Danny brought him here, and paid what it cost to do so. That’s why he will in all likelihood pay Kyrie the five-year, $188 million max. He made one of the most famous three-point shots in NBA history, and may well make several more of massive importance. He had the aptitude and confidence to note how OKC started to tear itself apart—once again failing to run an organized offense in deference to Russell Westbrook on full-tilt hubris—and shred a defense for a gorgeous floater.

Credit where due to the actual go-ahead shot, though:

Free throws by Morris and Horford put icing on the cake, 101-96. Tatum kept them from ruin during the game and the veterans sealed it, but the whole squad had to recover to ensure the W.