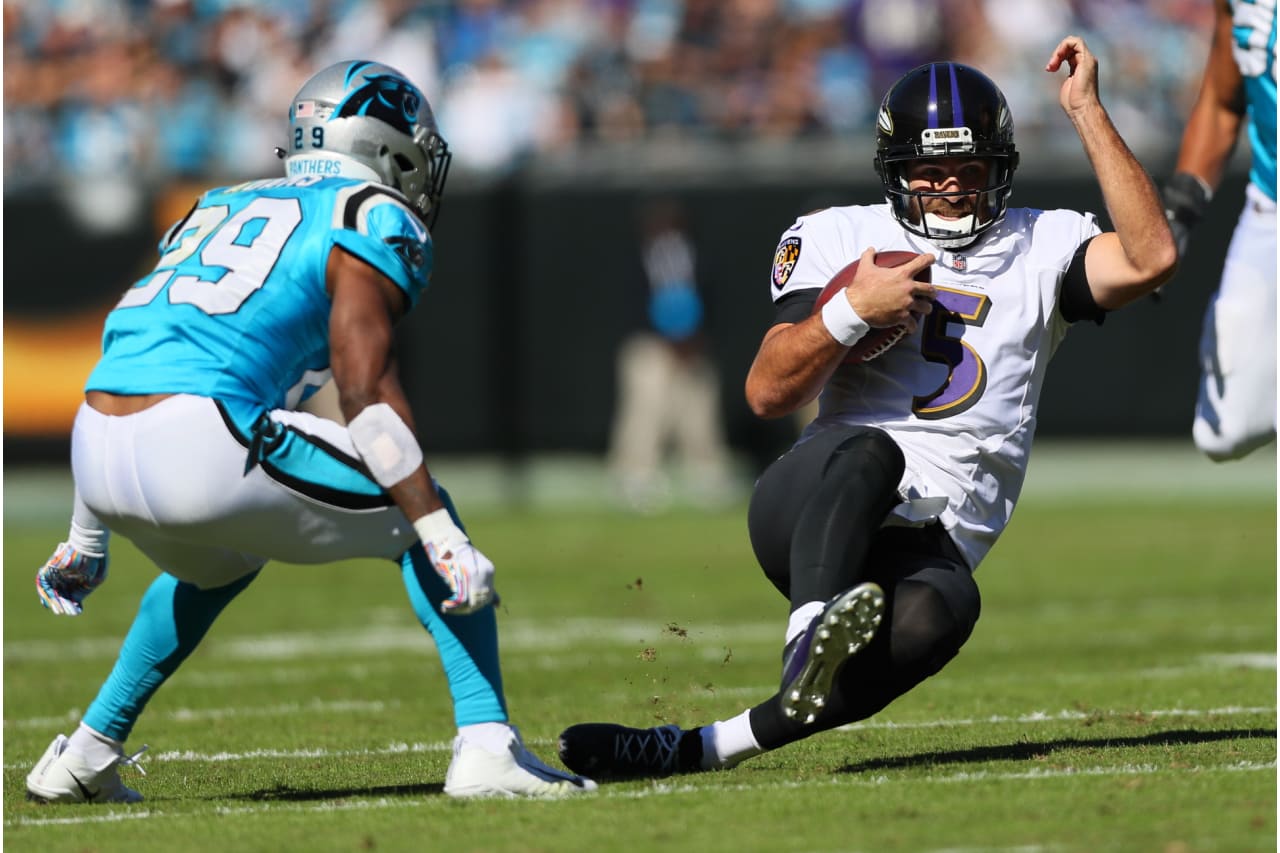 If you were wondering if the Baltimore Ravens had re-set a solid course to the AFC playoffs, you would be wrong.

They’re back to mediocrity as a way of life.

Offensive coordinator Marty Mornhinweg threw a clunker of a game plan into the stew this past Sunday. Somehow he made the Ravens offense look worse than it really is. Sure, give credit to Luke Kuechly and his defensive mates, but Coach Marty gets a big assist.

“We’re 4-4. We’re an average team,” safety Eric Weddle said. “We just lost, got blown out, so we’re I wouldn’t say [at] rock bottom, but we’ve got to look at ourselves and get back to work.”

Two weeks ago, the Ravens were atop the division. Now, Baltimore has projected 69 percent chance of making the playoffs, according to Football Power Index.

“We are obviously not in the most ideal situation possible, but we still have eight games left,” QB Joe Flacco said. “I feel like we have the opportunity to play really good football. We just have to make sure to keep the focus on that. I think there is obviously a bigger threat now to let this stuff affect you mentally, let it affect the team and how we are gelling together. We just have to combat that just by being ourselves and being as tough as we possible can.”

For a team that couldn’t get on the same page during the game, the coaches and players were in unison after the fourth-largest margin of defeat over the past three seasons.

“We got our butts kicked today,” Flacco said.

“It was definitely a punch to the gut,” guard Marshal Yanda said.

“If we don’t perform how we want to next week, there’s definitely going to be some problems,” linebacker C.J. Mosley said. “Mentally and physically, we lost this game. But at the end of the day, we know what we have to do next week.”

Cam Newton completed 21 of 29 passes for 219 yards and two touchdowns and ran for 52 yards and another score as the Panthers soundly defeated the Baltimore Ravens 36-21 on Sunday for their ninth straight win at home.

Christian McCaffrey had two touchdowns and the Panthers continued to get electrifying performances from different players. This time, it was rookie wide receiver D.J. Moore, who turned in his best game as a pro with 129 yards from scrimmage.

“We present a lot of issues for defenses and that is what this offense was kind of built for,” Newton said. “We have dynamic players all around the field.”

Unlike last Sunday when they needed three fourth quarter touchdowns to erase a 17-0 deficit and beat the defending Super Bowl champion Eagles 21-17, the Panthers took it to the Ravens early and often.

After spotting the Ravens a 7-0 lead on the game’s first possession, the Panthers (5-2) scored on four straight drives in the final 16 minutes of the first half to break the game open and take a 24-7 halftime lead.

Newton threw an 11-yard TD pass to Greg Olsen , McCaffrey ran for a 11-yard score and leaped into the air to corral a 6-yard TD pass that ricocheted off the hands of safety Eric Weddle and into his arms in the end zone. And when Baltimore (4-4) climbed to within 13 late in the third quarter, Newton was there to calmly drive the Panthers 85 yards in nine plays, racing in untouched from 12 yards out on a naked bootleg to put the game away early.

The Panthers rolled up 386 yards against a Ravens defense that had come in allowing a league-low 280.6 yards and 14.4 points per game.

Baltimore seemed a step behind all day long, unable to figure out the Panthers multiple misdirection plays.

“They present a lot of misdirection and formations, different plays and was tough to get in a rhythm with them and Cam played an outstanding game,” Ravens safety Eric Weddle said.

The momentum-turning play came in the first quarter when defensive tackle Kyle Love crashed through the line and delivered a vicious hit on Ravens running back Alex Collins, jarring the ball loose. Defensive tackle Vernon Butler came up with the loose ball at the Ravens 12 after Luke Kuechly unsuccessfully tried to scoop and score. Three plays later, Newton found Olsen on a slant route giving Carolina a 14-7 lead it would never relinquish.

“Sometimes you’re unblocked and you have to make a play,” Love said.

It wasn’t for lack of guts that the Ravens lost. Leading 7-0 in the first quarter at Carolina, Ravens coach John Harbaugh went for a fake punt from his own 10-yard line on a fourth-and-1 — and Baltimore appeared to pick it up easily with Anthony Levine plowing ahead for an 8-yard gain. However, the Ravens were called for an illegal shift on the play, wiping out the first down, and they wound up punting.

Harbaugh also went for a first down on fourth-and-1 from his own 34 and got it on a Flacco sneak.

INJURIES: Ravens starting left tackle Ronnie Stanley was helped off the field in the third quarter with a knee injury, but did return. The Panthers reported no injuries.

UP NEXT: Ravens host Pittsburgh next Sunday.