Important Dates for the Braves 2018-19 Offseason 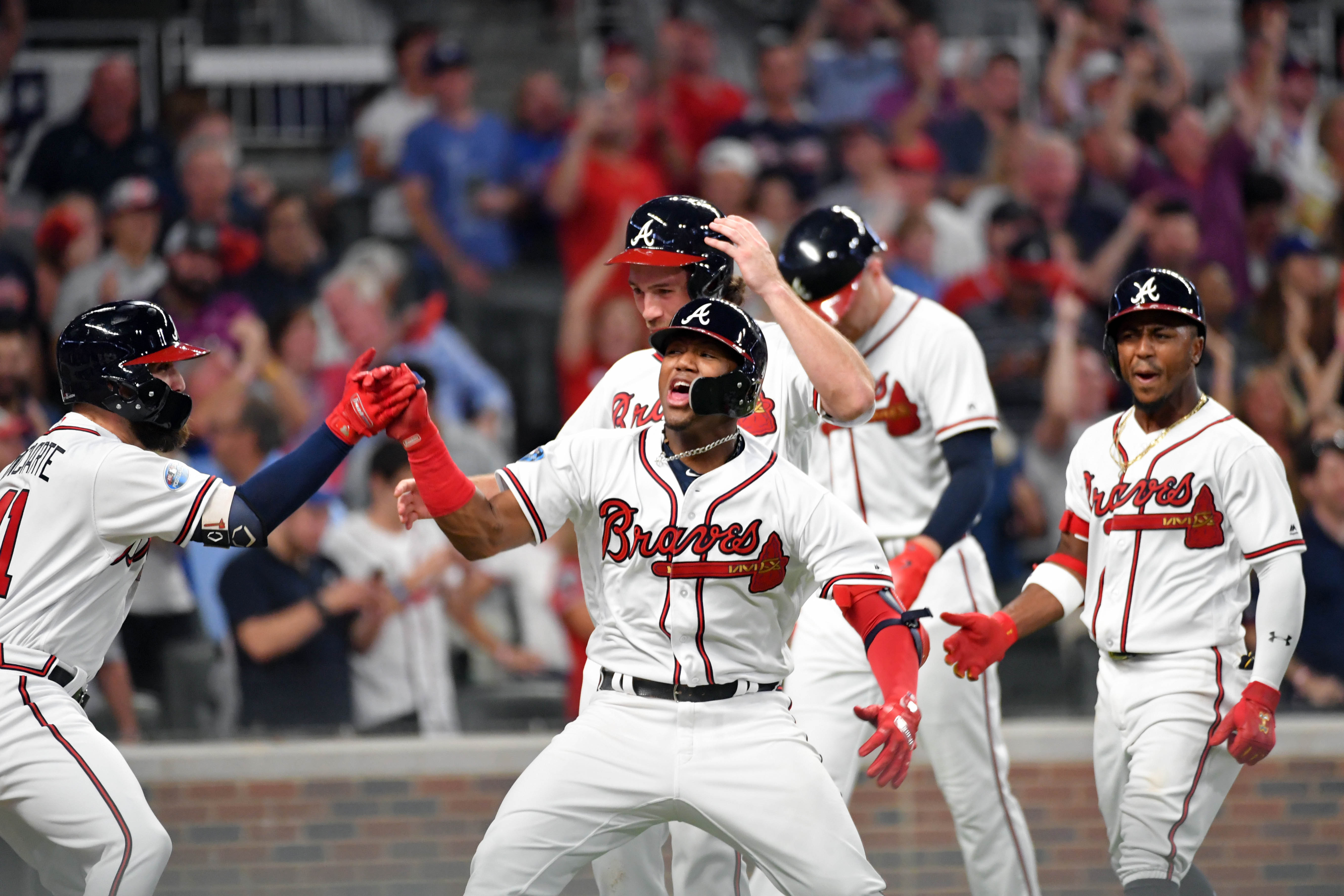 Important Dates for the Braves 2018-19 Offseason

With one weak swing by Manny Machado on a nasty Chris Sale slider, the 2018-19 offseason got started. Well, not officially, but for every other team not experiencing a drunken hangover after their team won the World Series, the 2018 season is the past and it’s onto 2019.

As we look toward that season, which Braves fans hope end with a similar celebration that we saw from the Boston Red Sox last night, there are several dates to keep in mind that will help shape what kind of offseason the Braves have. I’m going to explore the ones that matter to the Braves and why.

October 29: Yep, we start with today because the day after the World Series ends, players can begin file for free agency. Now, we won’t see Bryce Harper sign with a new ball-club today because for the five days following free agency, teams will be scouring their list of free agents and deciding whether one or more deserve a qualifying offer. Without offering one, the team cannot recoup a draft choice if the player signs elsewhere. A qualifying offer this year is set at $17.9 million. It’s based on the average of the game’s 125 highest-paid players.

For the Braves: Atlanta doesn’t have many free agents, but here’s a list.

The Braves could bring back any of these free agents with the exception of McCarthy, but are unlikely to extend a qualifying offer to do so.

November 2: In addition to needing to make a decision on any qualifying offers they may want to extend, MLB teams need to re-add any players on their 60-day DL that are team-controlled for the following season. If the team doesn’t add a player on the 60-day DL to the 40-man roster by the fifth day of the offseason, the player will become a free agent.

For the Braves: Again, we have a list. I’ve removed the potential free agents.

Seven spots opened up by the exiting free agents, seven spots needed. While there is room for each of these players, it seems likely one or more will be non-tendered at this point just to open up some slots.

Also by this day, contracts that have an optional year for 2019 or beyond require decisions by either the player, team, or both. The Braves do not have any player on the roster with an option for the 2019 season.

November 3: Free agents can sign and the offseason bonanza truly begins. We’ve already looked at profiles for Patrick Corbin, Bryce Harper, five free agent catchers, Manny Machado, Marwin Gonzalez, and Dallas Keuchel. More is coming even after free agency officially begins. While free agency does begin, it’s rare to see players start coming off the board that quickly. The 2017 Braves signed R.A. Dickey early in the process, but it still didn’t come until a week after players filed for free agency.

November 6-8: GM meetings take place in Carlsbad, CA. These meetings aren’t quite as event-filled as the winter meetings in December, but some deals could see their conception here until being finished at a later date.

November 8: Silver Sluggers are handed out for excellent offensive performance by position. Freeman has the best chance to win one, though Paul Goldschmidt will probably take home the honor. Also on November 8th, a one-week tour of Japan will begin for a roster of All-Stars. A partial roster was announced in September that includes Ronald Acuña Jr., but I still haven’t heard what a full roster might look like. (9:45 AM edit: Here’s the roster. Acuña Jr. remains the only Brave on the roster.)

November 12: The Rookie of the Year is announced. Juan Soto and the Braves’ Acuña Jr. each are intriguing candidates and it’ll come down to a player who had the best offensive season ever by a 19-year-old or a 20-year-old who did everything in pushing his team to a division title. Also, qualifying offers must be accepted or declined by this date.

November 14: The Cy Youngs are announced. Mike Foltynewicz had a nice season, but it would be a surprise for him to receive a vote. Also, in Atlanta, the Owners’ will get together for two days of meetings where they will take care of some league business.

November 15: The NL Most Valuable Player pick will be revealed and it’s Christian Yelich. I mean, maybe it isn’t, but we all know it is. Look for where Freeman, Acuña, and Foltynewicz place.

November 19: Comeback Players of the Year should include two Braves among the candidates. Anibal Sanchez looked like he might be forced into retirement after the Twins gave up on him last spring while Jonny Venters hadn’t thrown a pitch in the majors since 2012. Unfortunately, it seems like NL voters will go with Matt Kemp despite the outfielder ending 2018 with just two more homers than he hit in 2017. Hopefully, I’m wrong.

November 20: Rule 5 Decision day. During the December winter meetings each year, the 30 teams take part in a Rule 5 draft which serves as a way to keep the bigger teams from hoarding all of the prospects. The rules are a little complex and Cub Reporter does a great job explaining them. The general rule is that if a player is not on the 40-man roster and has been a professional for four years (if drafted out of college) or five years (if signed out of high school or on the international scene), they are eligible for the Rule 5 draft. While this rule isn’t concrete, it’s true in most cases.

For the Braves: By adding Wes Parsons, Chad Sobotka, and Touki Toussaint to their 40-man roster, the Braves have already decreased the available players that might intrigue other teams. They will still have to make a couple of decisions. Most notably – Patrick Weigel. Many fans of the 2016 Rome Braves will tell you that Weigel was every bit as impressive as Kolby Allard, Max Fried, or even Mike Soroka. He missed most of the 2018 season after Tommy John surgery ended his 2017 campaign, but did make it back for rehab appearances in August. He ranks #21 on the Braves Pipeline and we ranked him #15th in our midseason Top 30.

Ranking one spot behind Weigel in those latter rankings that we did was Alex Jackson. The power hitter struggled through a rough 2018 and has lost a lot of steam as a prospect. That makes him unlikely to get added to the 40-man roster, leaving him unprotected in the Rule 5. However, Huascar Ynoa could be an interesting option. He only has 24.2 innings above low-A and they weren’t particularly impressive, but he has one of those special, raw arms. Team likely will pass, however, due to the requirement that they would need to find room on their 25-man roster for Ynoa.

November 30: Non-Tender Deadline. For most teams, more than half of the 40-man roster is made up of players who are team-controlled through the following season, but not yet signed to a contract. Teams have until November 30 to decide if they want to offer a contract. While we see this rarely affect players who aren’t arbitration-eligible, this mainly focuses on players who are. That list for the Braves is pretty long and it also includes two players who need to be re-added to the 40-man roster after ending the season on the 60-day DL. They may be effectively non-tendered before this deadline.

If the Braves do not offer one or more of these players a contract for 2019, they become free agents. It’s important to note that the contract they offer by the end of November doesn’t have to be their formal offer that gets exchanged later as part of the arbitration deadline. We’ll get to that shortly.

December 9: On a yearly basis, different Hall of Fame committees get an opportunity to award those that wrongly weren’t enshrined before. Often, these committees don’t elect players, but managers and front office types. That’s what happened two years ago when John Schuerholz was selected. That committee, the appropriately named Today’s Committee, will also vote this year on baseball figures who spent a bulk of their career in baseball after 1988 and are not eligible to be voted in the traditional way. The only former Brave to keep an eye on for that might be Kenny Lofton.

Early-January (probably): No official date has been nailed down for when the 2019 Hall of Fame class will be announced, but we know it’ll come soon after the new year. Last year, Chipper Jones became the latest Brave to earn enshrinement. Could another Brave join them? Unlikely. In his final year on the ballot, Fred McGriff seems almost sure to miss the needed 75%. Same thing for Gary Sheffield and Billy Wagner, who will still have a few years on the ballot. Andruw Jones barely missed falling off the ballot and has a huge hole to climb if he’s ever going to get elected. The ballot of first timers hasn’t been officially announced, but it could include one-time Braves Derek Lowe and Freddy Garcia – neither of which seem likely to even get the 5% needed to stay on the ballot. I’ll probably bring back my weekly look at a group of players from the ballot.

January 11: Arbitration Deadline: After tendering a contract at the end of November, if a team has not signed an arbitration-eligible player to a contract for 2019, both the player and team will exchange a formal offer. While the two sides can continue to negotiate beyond this deadline, should they still not agree to a contract by February, the two sides could argue their case in front of an arbitration panel that will choose either what the team offered or what the player seeks.

For the Braves: Most players will sign before the deadline, but should a player not sign, the Braves have a long-standing policy of “file-and-trial.” That means that if they don’t sign the player to a contract for the next season by the deadline, they will break off talks for a one-year deal and take whatever the arbitration panel decides. That happened last offseason when the team and Mike Foltynewicz couldn’t come to an agreement. Sadly, the two sides were only $100,000 apart when they filed, but the Braves stuck with their policy and beat Foltynewicz in arbitration.

There is a loophole to the whole file-and-trail strategy and we saw that several years ago when the Braves blew past the deadline having not come to agreement with three top players from their team – Freddie Freeman, Jason Heyward, and Craig Kimbrel (editor note: originally said A.J. Minter. In my defense, he could be as nasty). But Atlanta would sign all three to deals of two or more seasons. So, Atlanta’s rule is specific in that they won’t keep talking about an one-year deal after the mid-January deadline, but they are open to long-term contract talks.

Mid-February: Pitchers and catchers report. I guess that’s not too far away.

And that’s it. A winter full of baseball dates to keep in mind. We’ll be here all winter as well, adding free agent profiles, exit interviews for Braves, analysis, historical pieces, our yearly preseason Top 50 prospects, and more.