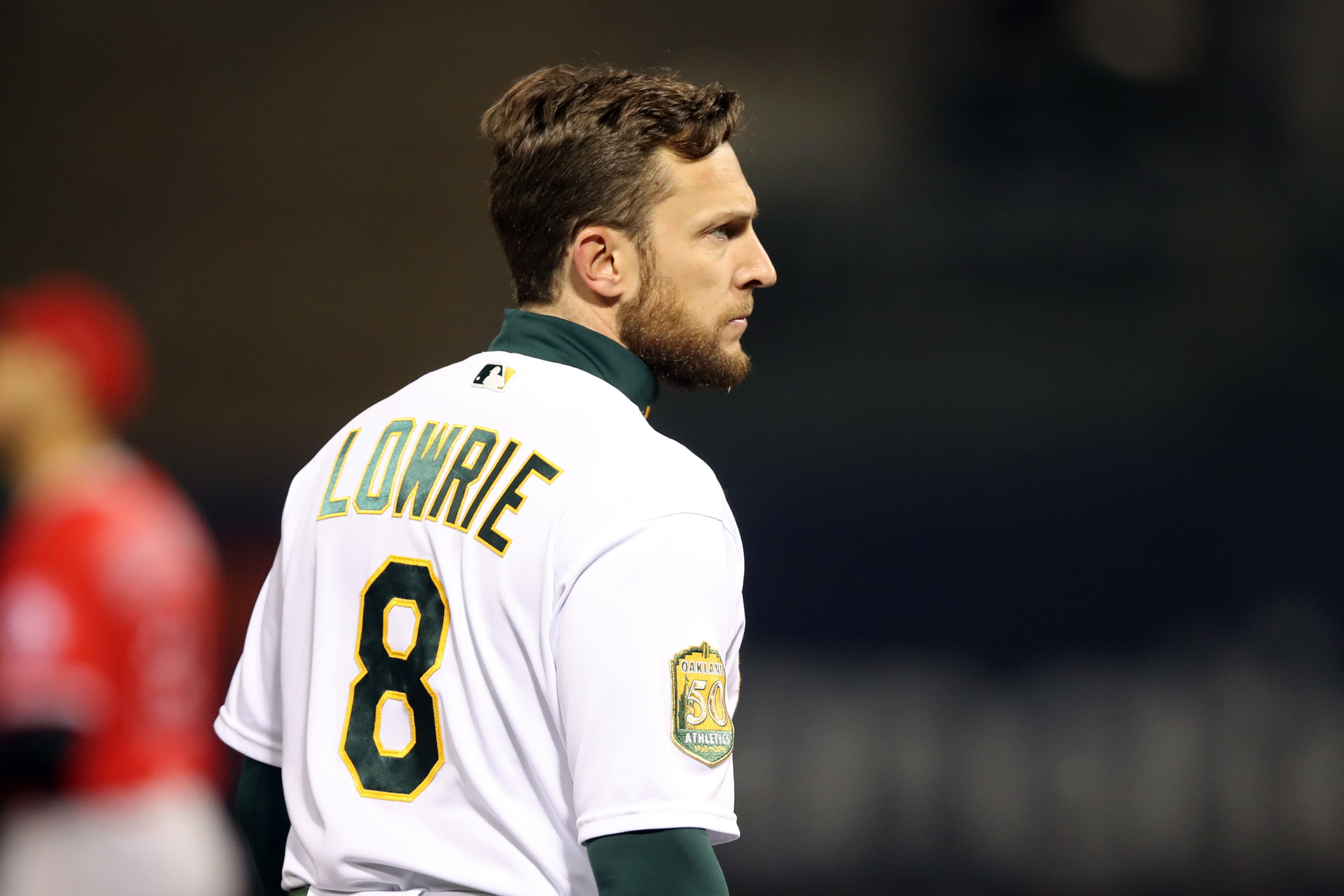 And Braves fans, buckle up and hold on to your nipples because it’s going to be a fun one!  There will be several big moves this season, I’m sure of it.  However, as we saw in the postseason, the need for a real bench is so vital in today’s game.  Last year, the Braves went almost 2/3 of a season with 1 viable bench option in Charlie Culberson.  That simply cannot happen again if the Braves are going to make a run in the postseason.  While those types of players can be acquired at the deadline, I think it’s worth noting that the Braves are in  a different position this coming year and will be prepared to have a full 25-man roster, day 1.

In all likelihood, the Braves will continue to carry an 8-man bullpen, which means by mere numbers, there will only be 4 bench players on a 25-man roster.  One of those will go to whatever catcher ends up paired with Tyler Flowers, which leaves only 3 spots left. Surely, the aforementioned Culberson will take up 1 of those spots, which means the Braves can look to add 2 more players this offseason.

It is very possible that the Braves could utilize an in-house option to solidify the bench by carrying Austin Riley on the 25-man squad. Hopefully, this move would create a chain reaction in which several of our regular players get rest throughout the season with Johan Camargo playing around the diamond. I’d love to see this happen, but at this point I think it’s a slim possibility.

I think it’s important to say that if the Braves only carry 4 bench players and 2 are Culberson and a catcher, the need for a Super-Utility type goes through the roof. If the Braves could find one end all be all utility player that’s plug-n-play all ’round the field,  then they could really get crafty and go after a bench thumper and not worry themselves too much about defensive flexibility for 1 bench player. Let’s take a look at 2019’s list of players the Braves could target as bench options:

Matt Adams– Playing 1B and LF, Big City had another productive season at the plate, but was shut down once again by left-handed pitching.

Lucas Duda– Playing 1B and DH, Duda struggled with KC before coming to ATL and playing well, primarily off the bench. Like Adams. Duda is a dud-a against LHP.

Marwin Gonzalez– The ultimate utility player, a switch-hitter that played 6

positions last year and hits well against both LH and RH pitching.

Steve Pearce– World Series MVPearce, played RF, LF, and 1B in 2018 and has good career numbers against RH and LH pitching.

Asdrubal Cabrera– A switch hitter with nearly identical splits from both sides of the plate. A well below average fielder now, but can fake all positions on the infield

Daniel Descalso– A LHH with neutral splits that can play 2B, 3B, and corner OF pretty well.

Brian Dozier– A RHH Has played exclusively 2B nearly his entire career and while he hits LHP at a better clip, he’s not helpless against RHP.

Logan Forsythe– RHH that can play 2B and 3B and hits well against LHP.

Jed Lowrie– A switch-hitter that hits both LH and RH pitching well. Has played 2B and 3B nearly exclusively these past few years, but can play SS in a pinch.

Josh Harrison– After a breakout year in 2014, Harrison has been a decent regular but it’s likely time for him to transition to a super-utility bench role. The bat really took a nose-dive in 2018, but he can play 2B, 3B, and the corner OF spots.  Hits LHP better than RHP, but it’s not an extreme split.

Ian Kinsler– Some team will likely give Kinsler a full-time gig, but he’s 36 now and isn’t the player he once was, nor should he be. Not much in the way of positional flexibility but that might need to change if he wants to continue his career. Hits LHP better than RHP for his career by .100 OPS points.

Neil Walker– Overall, Walker’s year with the Yankees was bad. However, if you delve deeper, you’ll see that he was actually pretty productive outside of an atrocious April (think the anti-Ryan Flaherty). A switch hitter, yet hits from the left side much better and logged innings at 1B, 2B, 3B, and RF last year.

Luis Valbuena– sign him TOMORROW…just kidding. Valbuena was awful last year but prior to then he was a pretty decent bat for 5 years with some pop. As a LHH, he hits RHP better but can hold his own (for his career) against LHP. Positional flexibility has dropped in the last few years and seems to be relegated to 1B and 3B.

Jon Jay– Entering the prototypical 4th OFer stage of his career, Jay is a LHH but holds his own against either LH or RH pitchers. Has logged innings in all 3 OF positions.

Gerardo Parra– Can’t hold down CF anymore, but is still a decent fielder with some pop out of the corners. Can hit RHP well but has MAJOR split problems against LHP.

Cameron Maybin– Like Jay, Maybin is entering the 4th OFer phase of his career. Still logging innings all around the OF and has the ability to run into

The Angels’ Cameron Maybin reacts after flying out for the final out of the fifth inning against the Oakland Athletics at Angel Stadium Tuesday, April 25, 2017. (Photo by Kevin Sullivan, Orange County Register/SCNG)

one every now and again.

Lonnie Chisenhall– Was just getting to be a good regular before injuries sidelined his career. A LHH that can hold his own no matter the handedness of the pitcher. Chisenhall also carries some positional flexibility as he’s logged innings in the corner OF spots and 3B (albeit, not since 2015).

Evan Gattis– There isn’t positional flexibility in Gattis, and truthfully, there’s never really been (Braves were beyond dumb to put him in LF when he was a completely serviceable catcher). Houston didn’t trust him at catcher in 2018, and by season’s end, he wasn’t playing all that often. Still, off the bench, he could be a 3rd catcher and masher for a team that’s likely not the Braves.

No Match for You

In my opinion, there are 2 things that the Braves will likely look for in a bench player and that is positional flexibility and the ability to hit no matter the handedness of the pitcher. This narrows down the list nearly in half as Matt Adams, Lucas Duda, Brian Dozier, Logan Forsythe, Luis Valbuena, Gerardo Parra, and Evan Gattis either lack positional flexibility or extreme splits at the plate. While it’s still possible for the Braves to consider the above 7 players, it’d likely be paired with a complement with extreme flexibility. Personally, if I had to pick one skill-set, it’d be the ability to hit both LH and RH pitching over positional flexibility, especially factoring in Snitker’s managerial style. Therefore the *above could include Dozier and Gattis in the right situation.

I’ve been harping the need for rest of our regulars for years, but even I see that it’s not fully possible when the bench is so lackluster. If Culberson can continue to perform his magic and the Braves can spend some $ on 2 good bench options that can spot start, it could be a perfect marriage for all parties.

With that being said, it’s hard to beat what Marwin Gonzalez can provide, but he’s going to cost…I’d say 3/36MM, give or take on either side. While that’s a lot, it’s also a price that someone will pay but I hope it’s not the Braves.

My 1st Bench Piece (but not really a bench piece): Meanwhile, Jed Lowrie is less heralded than Marwin Gonzalez yet just as flexible at the plate. He could provide the Braves with options, utilizing him all over the infield and creating match-up headaches for opposing managers for less overall cost due to age. Contract: 2/22MM

My 2nd Bench piece: Jon Jay- Because of the price behind the first piece, there needs to be a counter-balance and someone to be able to cover the OF need…in walks Jon Jay. Jay can still manage all 3 OF positions and has speed enough to pinch run. He’ll likely be quite cheap considering his down year, but he can still get on base and that’s a needed skill. Contract: 1/2MM

In the above scenario, there are many options that I’d like and could be considered, however the need for a flexible bench is dire in today’s game of a bajillion relievers per game.  Who’s your pick from above? Got other ideas? Let’s hear about them!