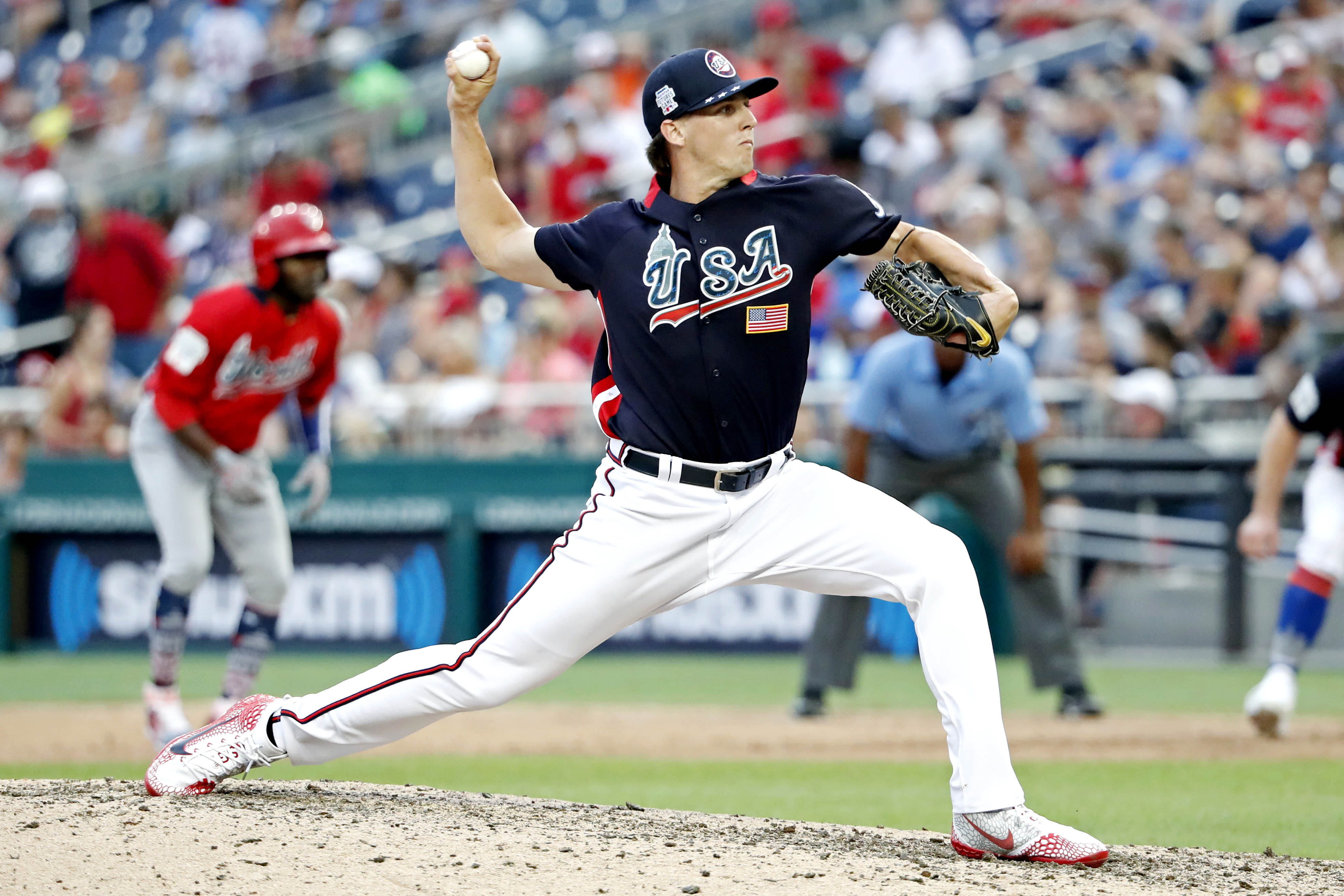 (This continued series recaps Braves still in the organization who played for the major league club in 2018.)

2018: Drafted fifth overall in 2017, Wright lived up to his pre-draft billing as the most MLB-ready arm available by ending his first full season of professional ball in the majors. Before that, the Huntsville, AL native had an average run in Double-A with Mississippi. His ERA was slightly worse than his FIP and his groundball tendencies probably weren’t aided by having Tyler Marlette and Alay Lago making up the right-side of the infield. However, Wright found his footing over seven starts from mid-June to the end of July. In those starts, he limited the Southern League to a 2.33 ERA with more than a strikeout an inning. On July 25, he threw eight-innings of one-run ball, a new career-best. It earned him a promotion to Gwinnett. He made four pretty solid starts there before shifting to the pen for three outings. That lined him up for a promotion to the majors and his debut included two hitless innings against the eventual champion Red Sox.

Contract Details: Turned 23 on October 2. Will be arbitration-eligible after 2021 at the earliest and could become a free agent following the 2024 season if he doesn’t spend more time in the minors. Did not use an option this season so he has three left.

Previewing 2019: Much like with Bryse Wilson, the Atlanta Braves didn’t have to bring up Wright this season. He was not going to be eligible for the Rule 5 this winter like Touki Toussaint was and, while performing well, Wright wasn’t overwhelming the competition at the time. To put it bluntly, Wright didn’t force their hand. But Atlanta still brought him up and for two reasons. The first was to see if he could get hot and earn a spot on the major league postseason roster. That didn’t happen.

But the bigger reason? Because Atlanta fully sees Wright as a potential member of the 2019 rotation and wanted to get his feet wet. From the moment he dropped to them in the draft, Wright was seen as a fast riser through the minors that should land in the majors with short work. The righty sports a flawless delivery, four quality pitches, and good baseball IQ. The same reasons the Braves thanked their lucky stars remain and they’ve only been reinforced by a rocket-like climb up the ladder that brought him to the majors after just 36 games in the minors.

Wright sits in the 93-95 mph range with his fastball and gets heavy sink on the pitch. One of the most interesting things about Wright is his ability to go to a collection of secondary pitches that don’t just exist to show hitters something new. They all have plus quality with enough projection left to improve. Both his curveball and slider can rack up strikeouts when he has good command of either or both. The curve is considered a bit better as he gets good depth off the pitch as it drops off. His slider has cutter-like movement at times – which is often less by design and more a product of Wright not having the best control of it at the moment. His changeup is not quite on par with his breaking pitches, but he gets good deception off the pitch. If he’s able to add a bit more bite to his changeup, Wright could ride that improvement to ace status.

But what makes Wright such a good prospect is that for a pitcher who still retains a good deal of projection, Wright also has a high floor. I believe within a couple of years, Wright could establish himself in the majors as a middle-of-the-rotation arm, which is the kind of floor so few pitchers have. In fact, no other pitcher in the Braves’ system has that kind of floor.

Wright has a durable arm and can induce some soft contact in the form of a lot of grounders. He probably won’t have many 200-K seasons in the majors, but he will strike out enough batters and has great control. Not only that, but he has a good idea of where he wants to throw the ball.

The Braves pitching staff seems pretty hard to crack at the current moment with Mike Foltynewicz, Sean Newcomb, Kevin Gausman, and Julio Teheran already in the mix. That leaves Wright to battle with Mike Soroka, Touki Toussaint, Kolby Allard, and Bryse Wilson. However, it wouldn’t surprise me to see Gausman and/or Teheran used in a trade. At the same time, I do believe the Braves will consider adding a starter. Either way, nothing will be handed to Wright. He’ll have to earn his shot. I have little doubt that he will.

Did you know? Wright was one of eight former Vanderbilt arms to pitch in the majors last season, including David Price and Walker Buehler. But did you know the first former Commodore to pitch in the majors was Ben Sanders, who pitched five years in the majors between the National League, Player’s Association, and American Association before the turn of the century. As a rookie in 1888, he led the NL in shutouts. In one of those shutouts, he set the first 25 batters down that he faced before giving up a single to the opposing pitcher.