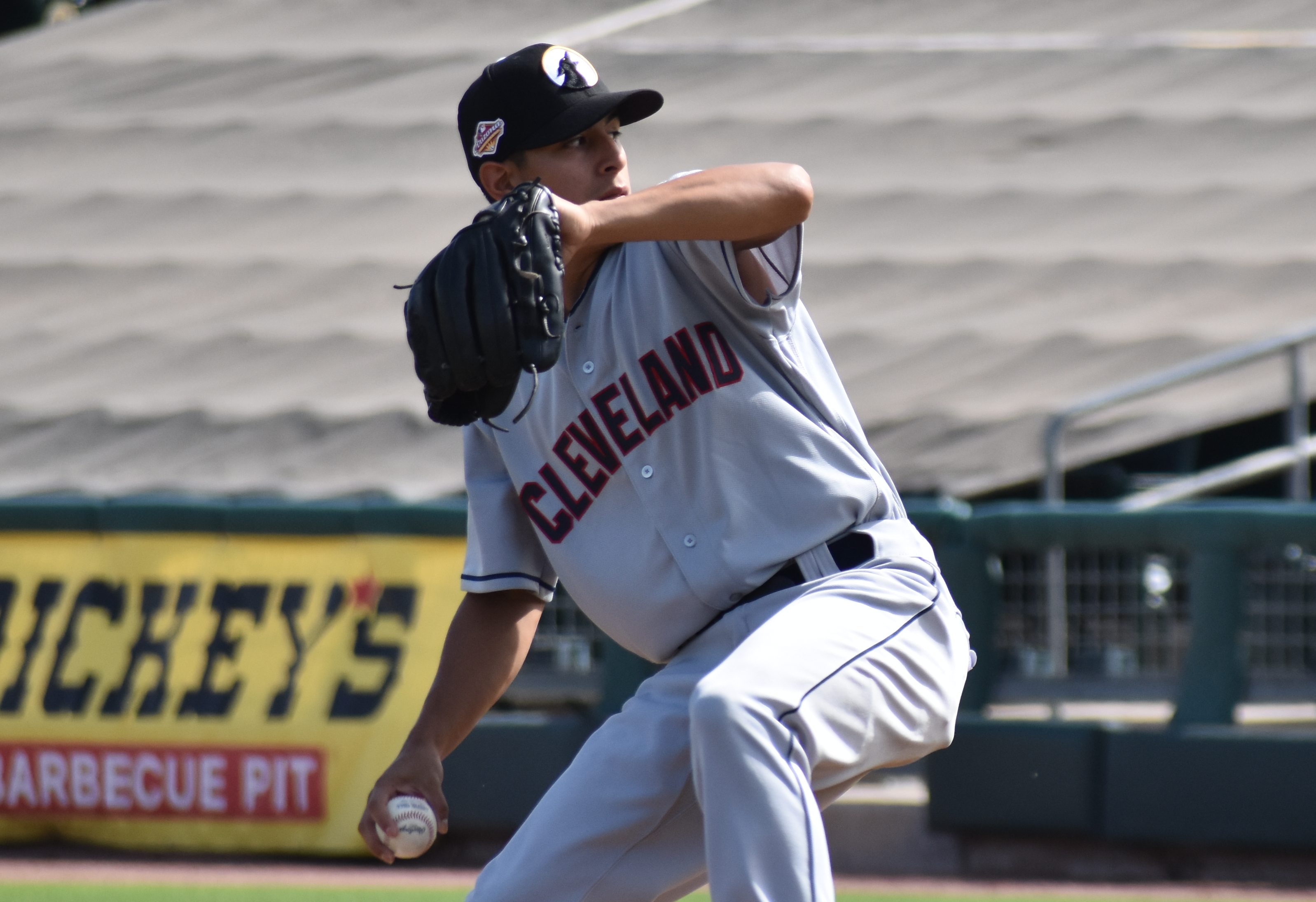 If you want to know how long the Indians have been affiliated with Justin Garza, the fact that Matt LaPorta was the Indians starting DH and Terry Francona was working with ESPN when he was first drafted by Cleveland should give you an idea. Of course, he didn’t sign then and was drafted again by the Indians in 2015 in the 8th round after attending Cal State Fullerton.

Less than a month prior to being drafted, Garza had Tommy John surgery. The Indians have picked up a few pitchers like this in the recent years as they feel comfortable with the rehab process, having gone through it multiple times with varying levels of success with the Major League staff including Carlos Carrasco, Josh Tomlin and Danny Salazar. It was particularly a theme of the 2015 draft as he was taken the day after the Indians selected Brady Aiken. Of course, this would mean that the 22 year old would miss all of the 2015 season and he ultimately threw in just nine innings during the 2016 campaign.

Garza pitches for the Indians during the 2016 Instructional League. – Joseph Coblitz, BurningRiverBaseball

After the Arizona League, Garza continued to work in Goodyear during the 2016 Instructional League, then in 2017 extended spring training. Working him back slowly, Garza was primarily used in relief in his first full season with the Captains, but he still made eight starts and nearly reached 100 innings.

While his numbers from his season in Lake County weren’t great, the important part was that he was healthy. In Lynchburg this year, he started performing as expected. In his first three starts he allowed one unearned run in 15.1 innings while striking out 19, walking five and allowing just four hits and, with the exception of one start against Wilmington in early June, continued on this roll through the first week in July. That’s where he hit another road block. Elbow pain cost Garza another stint to the disabled list, although this time it was only about a month. After two rehab appearances with the Mahoning Valley Scrappers, Garza ended the season with the Hillcats with a six strike out, one hit, no walk appearance against Salem good for five innings and a shut out win.

In order to make up for lost time, Garza is now pitching with the Glendale Desert Dogs of the Arizona Fall League and he is doing so at an elite level. Things started off a bit rough in his first appearance as he allowed runs in each of the first two innings and lasted just 2.2 total, but since then he has allowed just two more runs in 11.2 innings.

In his first start against Surprise, Garza’s primary issues came with his command and he had to be saved with a pair of outs on the bases (a Connor Marabell assist to get Vladimir Guerrero Jr. between first and second and a Garza pick off of Nick Heath attempting to steal third) to keep things as close as he did. He ended up walking four in that game and striking out two, but since then has walked just three more and struck out 12. Whatever issues he had throwing strikes have been significantly addressed.

Garza pitches for the Glendale Desert Dogs against the Surprise Saguaros during a 2018 Arizona Fall League game. – Joseph Coblitz, BurningRiverBaseball

October 30th against the Scottsdale Scorpions was not only the first time that Garza went a full five innings this fall, but was by far his most dominant appearance. He was perfect through the first three innings with four strike outs, then allowed his only hit and walk in the fourth, although he did make a throwing error on the Andres Gimenez single. After the slight blip, he came back for a perfect fifth to finish off his day with his fifth strike out.

That electric outing gives Garza a sparkling 1.88 ERA with just 9 hits allowed in 14.1 innings on the season. His strike out and hit rates are similar to his regular season numbers this year in Lynchburg and that is an impressive feat since he is not only pitching to some of the best hitting prospects in baseball (like Guerrero), but many who are significantly more advanced than himself. His ability to get AA and AAA hitters out consistently, especially with the amount of swings and misses he is garnering, is a great signal that he is ready for the next level.

There is a great chance that he will be playing at the next level next year. At the moment, Shao-Ching Chiang and Michael Peoples are the only returning starters for the Clippers and Triston McKenzie, Aaron Civale are most likely going to be promoted to start next year to fill in the gaps. This leaves an extremely slim Akron pitching staff that will likely include Garza as well as Jake Paulson and Zach Plesac from last year’s staff and at least Sam Hentges from Lynchburg. Of the group expected to be in Columbus and the one in Akron, only McKenzie and Hentges have a significantly higher ceiling than Garza and he could quickly move up the ladder to AAA if his AFL performance is any indication of how he will pitch in AA.

Ultimately, the important part for Garza is that he is beyond his elbow problems and has made up for all his lost time. Now reaching the mid-90’s with his fastball again with a plus breaking pitch, he should be considered highly among those pitchers in the highest levels of the Indians minor league system.

For the Indians, the best use for Garza at the Major League level could be out of the bullpen, but keeping him in the rotation now is the best way for him to get the greatest possible experience. It’s hard to see him making it to Cleveland as a starter, but things get really fuzzy after 2020, so there could be an opening in the long term even though there won’t be any in the near future. Given his career so far and the current situation, 2020 could be a likely season for Garza to break into the league as a reliever with 2021 more reasonable if he remains a starter.