Isles Insights: Islanders make it four wins in a row with win over Pens 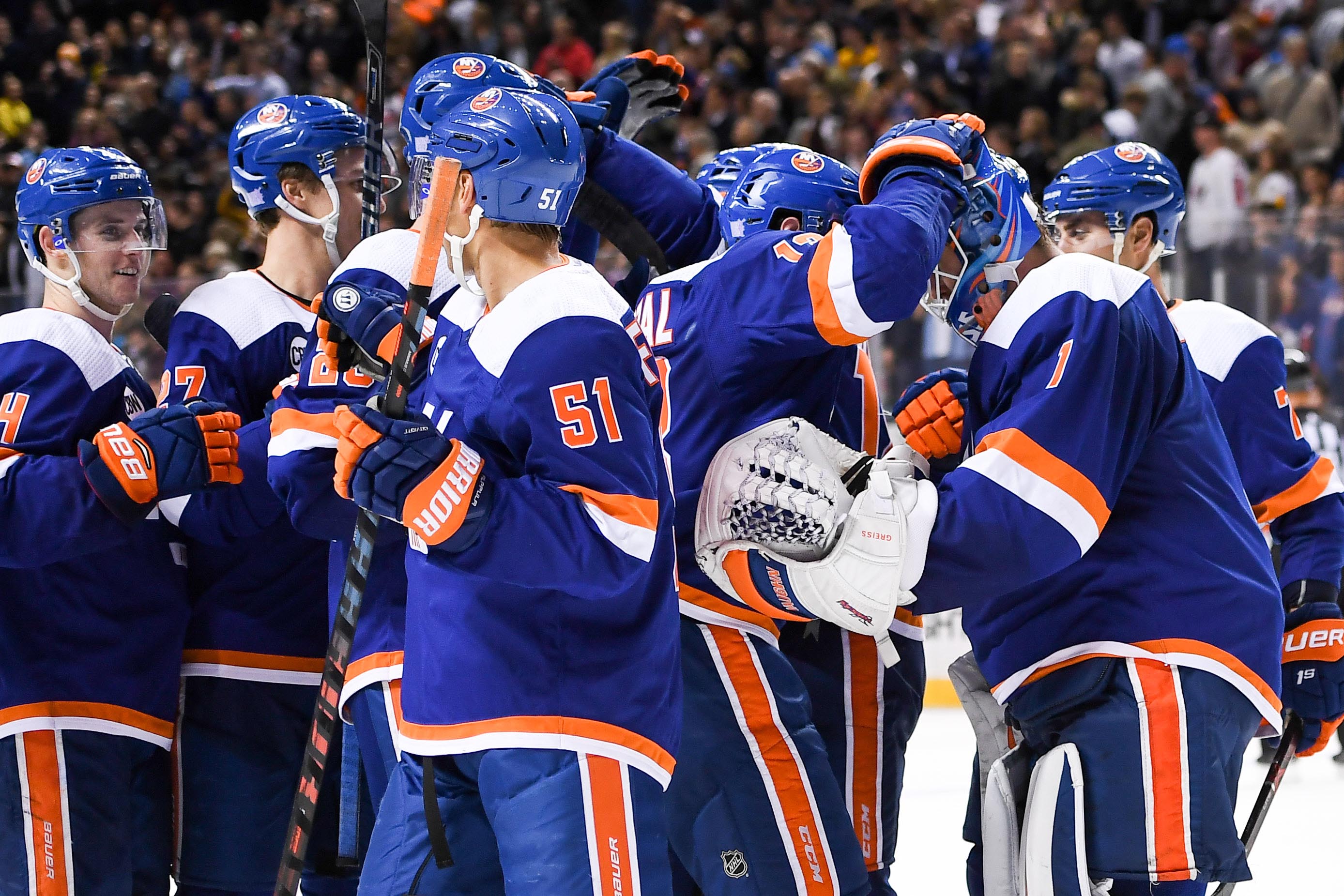 Isles Insights: Islanders make it four wins in a row with win over Pens

NEW YORK — The Islanders captured their fourth straight win on Thursday night with a 3-2 shootout win over the Pittsburgh Penguins. Josh Bailey scored the only goal in the shootout to secure the victory for New York.

Bailey also scored the Islanders opening goal at 14:46 of the second period to tie the game at one. Anders Lee was credited with the team’s second goal at 10:11 of the third to give the Islanders a 2-1 lead, but Evgeni Malkin tied the game less than two minutes later.

Dominik Simon scored the Penguins only other goal in the loss.

1. It’s hard to lead off the insights with anything other than the diving poke check Thomas Greiss made on Sidney Crosby in Overtime. The Isles starter made the Wade Dubielewicz-esq stop as the Penguins captain was on a breakaway.

It was one of several impressive saves made by Greiss in the extra period.

“I guess he didn’t expect that,” Greiss said about the sprawling poke that saved the game for New York. “Gotta mix it up every once and a while. Keep them guessing. Happy it worked.”

Greiss made 29 saves in the win for the Islanders. It was his fifth start in net this season.

2. “Again Greisser came up big for us. I think we’ve seen him do that plenty of times in practice. He’s very good at using that at the right moments to surprise guys and it worked out well for us there. It was another big moment in the game.” — Josh Bailey on Greiss’ big save on Crosby.

3. The Islanders captured their fourth win in a row on Thursday night and their second consecutive victory over the Penguins in the span of three days. While it’s still quite early in the season, the Islanders did move into a tie for first place in the Metropolitan Division.

It’s safe to say that not many people expected the Islanders to be that competitive of a team, especially with the loss of John Tavares during the offseason.

“I think that happens every fall no matter what,” captain Anders Lee said about being discounted before the season. “It pisses us off as players with what work we put into. How much we care about this game and each other and the team, and all the above. When you get you written off like that it’s inspiring. You get a little bit of that fire under you and you have to go out there and prove people wrong.

“There’s nothing better than doing that. Obviously, we’re only 12 games in here and we can’t get ahead of ourselves. We just put a little streak together, but this is a season-long commitment from all of us to do exactly that.”

"Any time you put a few wins together, the feeling gets really good in the room." #Isles pic.twitter.com/B4kSoBVjOu

4. Lee has nine points over his last six games, which includes a goal in Thursday’s win over the Penguins. The goal was Lee’s fifth of the season and his first even-strength goal of the year.

5. Speaking of players on a roll,  Bailey recorded a point in his seventh straight game with his shorthanded goal in the second period. Bailey’s 13 points through the first 12 games this season leads the team.

6. “I really liked the first two periods. I’m a big believer in the hockey gods and in Pittsburgh, they were the better team in that first period and then I thought we were better after that. Tonight I thought we were the better team and you don’t get the result you think you deserve. You just stay with it and I thought in the second period we stayed with it and we had a really good second period. Obviously, in the third we knew they would have a push and they did and we were able to get it back on track. We got a huge goal to get a lead and obviously overtime was exciting.” — Barry Trotz on the way the team played.