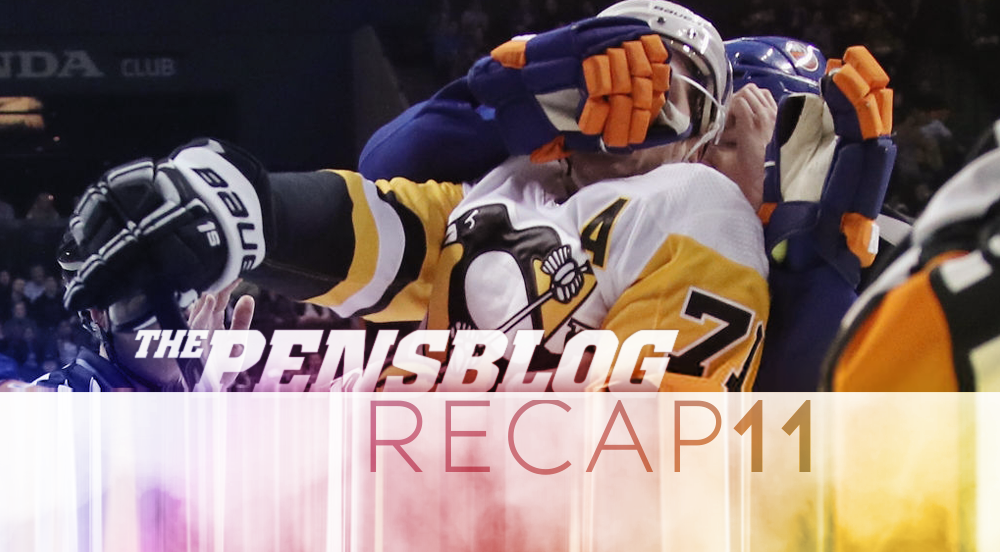 Three is such a magical number.

Three is the number of people it takes to have a rodeo with a man and his wife.

Given the Pens dominance over the Isles over the last decade or so, the last one seems weird, right?

If there’s one positive, it’s probably that it wasn’t a clean sweep in that last night’s shootout gave the Pens a point at least.

If there’s another positive, it’s that Matt Murray got them that point, stopping 92.3% of the shots that he faced, many of which (again) came from right on his doorstep.

heat map and all stats herein via naturalstattrick.com as always

We’re 11 games into the season now and, more often than not, the Penguins have played games expecting their goaltenders to bail them out with the amount of high danger shots they allow.  At this point, it’s become an exhibit of redundancy to showcase where they’re allowing these shots from, but probably an important exhibit to showcase in order to temper expectations of this team defending like they did in 2016 and 2017.

This is home now.

Welcome back to the lineup, @Letang_58! pic.twitter.com/i82Fi5xch4

Thank Khrist that Letang was back and healthy enough to play because this team sucks ass without him.  Facts only here, thank you.

No changes to the forward group that fell to the Isles on Tuesday night, while Murr got his shot at redemption, opposite of Eddie Greiss.

classy move from the @NYIslanders pic.twitter.com/pxtWs9QVVg

On the opening couple of shifts of the game, both teams traded off some chances, including Greiss robbing Malkin on a one-timer from a Phil! feed.  Immediately after, both Komarov and Oleksiak went off for holding and roughing respectively just 1:34 into the game.

This led us to believe this game was going to possibly be fun, but hockey is a liar sometimes and the opening frame was a total snoozefest instead.

That is until Phil! was hooked up by Barzal trying to skate the puck out of the Pens zone after Murr posted bail on behalf of the Penguins, incarcerated in their own end.

And while it wasn’t the Pens top unit to get them on the board, the second unit of Sprong-Guentzel-Simon-Maatta-Johnson did just that.  First, they were able to get set up after a clearing attempt, but with Sprong cradling the puck on the half-wall and ripping one, the shot hit the glass in behind Greiss, eluded Johnson, who had crept in close to the goal for any rebound that may have kicked out, and exited the zone.

Johnson and Maatta went back and combined to collect and break it back up north with the latter hitting Simon galloping through the neutral zone.  He hit the line with speed, drawing all 3 remaining Islander penalty killers towards him.  Recognizing this, he put his thing down, flipped it and reversed it to hit Bake flying up the right wing to drive the net and flip a shot in on Greiss.  Weird little backhanded from a tight angle was tough for Der Deutscher to deal with, kicking it right to the stick of the crashing Simon for the banger.

Side note: Sprong is never going to score at this level if he’s not willing to crash the net and make a goal happen.  The only real gripe to be had with him last night was on this play as he just hangs out and waits for maybe the puck to hop out to him while Simon goes and makes something happen by going to the right area of the ice.  Otherwise, Sprong had a pretty decent game again.

With 6:42 left, Johnson found himself in the box for hooking Barzal after Barzal about smoked him, but the Pens were able to kill it off and kill off the rest of a boring period of hockey.

Nothing really doing early in the 2nd outside of Murr making a nice little save in tight on Cizikas and Johnson trying to decapitate The Best Boy with Nelson’s body.  One of those things is not like the other.

Then, midway through the period, the game started to open up a little bit following a Phil! breakaway.

“No dice,” said Greiss on the chance.

Shortly thereafter, the Pens went back to the kill with 7:41 left in the period after ValFil got the better of Dumo to draw the call.  But just 13 seconds in, Bailey went off for “hooking” Hagelin on a clearing attempt. It was, admittedly, a soft call.  Bailey would get his, though.

With 38 seconds left on the 4v4, the puck bounced on Pelech, forcing him to interfere with Malkin to try to prevent a 2v0, but Greiss stood tall to deny Oleksiak’s breakaway on the 1v0 right before the whistle blew to put the Pens on a 4v3 PP that turned 5v3.

But when Bailey’s penalty expired and the PP went from 5v3 to 5v4, the Islanders struck while the gettin’ was good.

First and foremost, Thomas Greiss was the Islanders best penalty killer here.  The 2nd best?  Casey fucking Cizikas: Penguin Killer.  Coming into this game, Cizikas had 10 points in 29 games against the Penguins, more than he has against any other team, including points in each of his last two games.  So while the Pens PP1 looked poised and primed to bury one or 5, Cizikas had other plans.  Heroic block to set the stage, then beating Hornqvist to the loose puck after Hornqvist got interfered with trying to get to it himself.  Bailey was released right at the right moment, getting in behind Letang and Malkin and taking the Cizikas bounce pass to storm in on Murr, throwing a little deke at him to freeze him, opening the wickets and sliding it home.

Nothing anyone could’ve done differently there.

Before we hit intermission though, Johnny Boychuk decided that being a slimeball follows you when you leave Boston (again, facts only), finishing out the period with a nasty little kidney shot behind the net on Guentzel.

boychuk? more like boy, i don't think this is legal pic.twitter.com/lgBIDPR17F

Through the first 9 or so minutes of the third, it was all one-way traffic with the Pens showing signs of life and dominating play, so much so that even Sprong saw the ice in the 3rd!  The difference, though, was Greiss Greiss, baby.

So of course, the Islanders would be the ones to get the go-ahead and it all started off of the stick of, you guessed it, Thomas Greiss.  First, he cleaned up Cullen’s dump in, only to have his teammates give the puck straight away to Jack Johnson in the neutral zone.  Johnson, under a little bit of pressure, teed up a slapshot rimmer.  What he didn’t do was get the puck up along the glass and keep it away from Greiss, who had been key in controlling the puck to set his D up for transitions all night long.

Basically, if you’re ripping the puck in there, you have to put it in a position that Greiss can’t control it.  Johnson didn’t do that and the Islanders, beating the forecheck, were able to get the puck to Nelson breaking into the Pens zone.

Nelson went right at Johnson, stopping up when JJ73 was sufficiently engaged and pivoting to the corner, turning back and having Hickey overlap him as he jumped into the play.  With Johnson now pulled up high, Hickey had a clear lane to move in and throw the puck in the direction of the Ruhwedel/Cullen/Lee/Bailey net-mouth scrum, getting that all important fortuitous bounce off Lee and in behind Murr.

But under a minute later, the goalscorer would head to the box with 8:59 left for a slash on OhSexyBack.  And while the Pens weren’t able to solve Greiss at 5v5 last night, they sure as shit were able to on the PP.

Key zone entry, movement all over the offensive zone, and Letang putting it on a platter for Gene.  You know what that means, folk’sssss.

As regulation neared it’s timely death, Murr had to be sharp and on point to preserve at least a point for the Peng, making two exquisite saves on two separate redirects on the same shift, more than enough to send this B to OT.

There are no words to describe how fun OT was.  Only GIFs.

Johnson nearly scored on a redirect.

Crosby had a breakaway and Phil! was giftwrapped a clean look with no traffic from the high slot to finish it off.

A shootout was our destiny.

In the shootout, the Islanders chose to shoot first with Jordan Eberle.  Murr set the tone with a delightful little glove save before stopping Nelson on the Islanders second attempt.

At the other end of the ice, Greiss kept on keeping on, taking away the net for Malkin to shoot high and wide and delaying Crosby enough to force him to barely even get a shot off.

Over the boards hopped Josh Bailey and into the net he put the puck with a schwifty little backhand-shelf move to give the Isles the advantage heading into the Pens 3rd and final shot.

All came down to Letang vs. Greiss to either keep it going or seal the deal.  Greiss stood up, read Letang and gave him the fivehole only to take it away right at the release, giving the Isles the bonus point.

Malkin has missed 14 of his last 17 shootout attempts. He’s missed 10 straight on the road.

With that, Pens are back at it as they host the Stanley Cup Champion Toronto Maple Leafs Saturday night in the first of a 2 game homestand.  Bury them.  Go Pens.