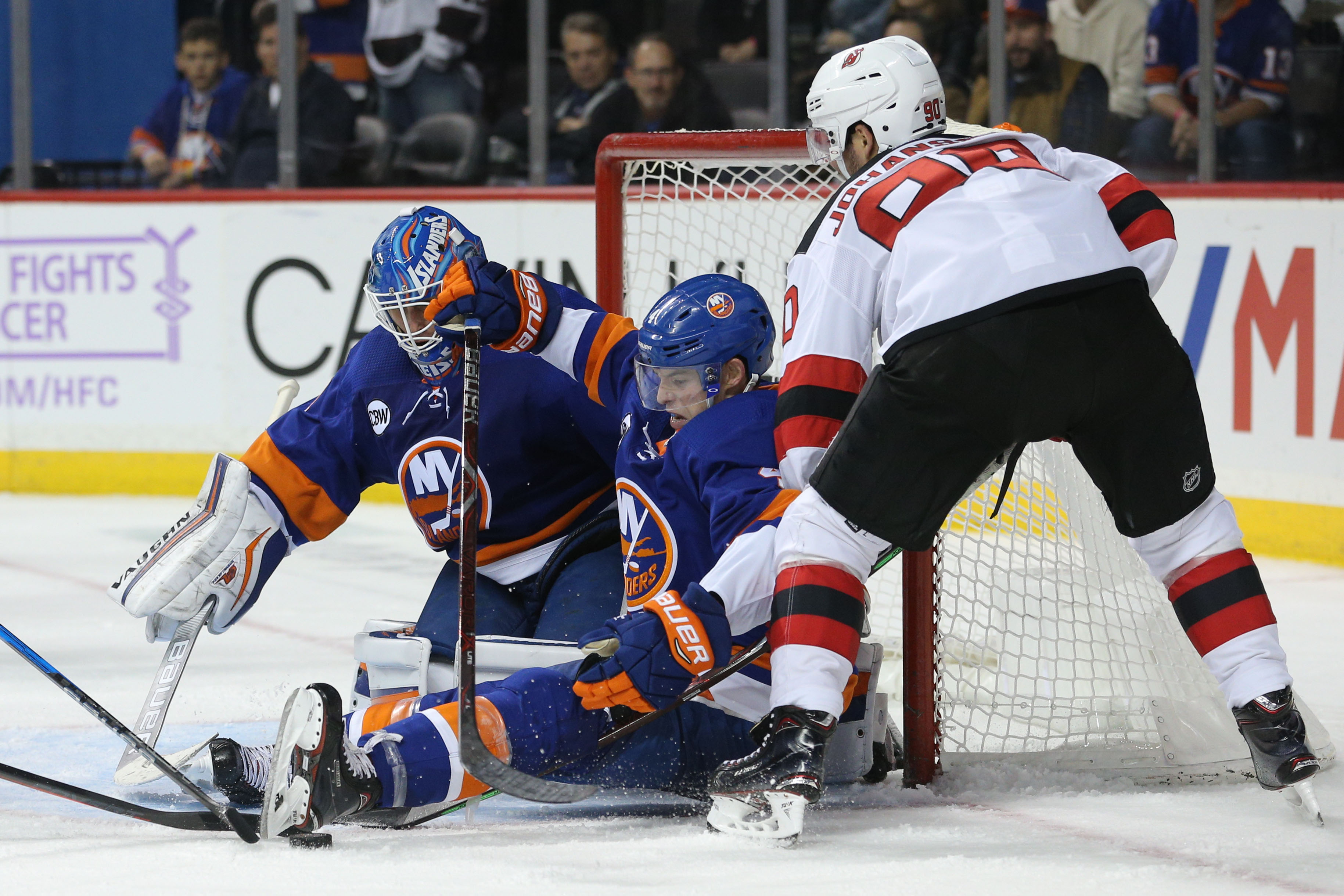 NEW YORK — Thomas Greiss made 35 saves and Jordan Eberle, Brock Nelson and Scott Mayfield scored in the Islanders 3-0 win over the New Jersey Devils. The win extended the Islanders winning streak to five and they are 6-0-0 against Metropolitan Division clubs to start the year.

1. Another night, another big performance out of Greiss between the pipes. The Islanders starter was a key part of the team’s 3-0 win over the Devils, make the necessary saves when his team really needed them, which included another breakaway save on an opposing team’s star player.

The shutout was the first of the season for Greiss and the ninth of his career.

“Our goaltender was really good early,” Isles head coach Barry Trotz said about the performance. “He’s been good. The last two game especially when he’s been in (net).”

2. For the second straight game, Griess made a save on an opponents star player while they were on a breakaway. On Thursday, it was Sidney Crosby and on Saturday it was Taylor Hall. The Devils forward had a breakaway chance on Greiss, and the Islanders netminder was able to get a stick on the shot attempt.

“It just happens,” Griess said about the scoring chance. “The players are going to create their opportunities… You always have to be ready.”

The often humble Greiss was quick to deflect attention away from his individual performance after the game while crediting the players in front of him. Nelson, however, noted that Greiss’ unpredictable style between the net often makes him such a tough player to try to score on.

“Even shooting on him in practice he’s unpredictable,” Nelson explained. “You have a breakaway one time he poke checks and one time he doesn’t… He knows how to save. It may not always be the orthodox way, but he gets the job done and he’s been great for us.”

3. “It went well. Everybody’s playing great together. We’re playing well as a team right now and I think it shows. Everyone is looking good.” — Thomas Greiss talking about his game on Saturday.

4. The Islanders win on Saturday moved them into first place in the Metro Division and had them at 6-0-0 against divisional opponents for just the second time in franchise history.

“What I like about us is we’ve just been calm. We haven’t got too high, too low and that’s what we need to do.”

5. The Islanders special teams units played a big role in the win on Thursday. The penalty kill went four-for-four through the 60-minute affair and Eberle’s first-period power play goal served as the only goal either team would score until 15:06 of the third period.

The power play did struggle after the Eberle goal, however, with the Islanders failing to capitalize on three other man-advantages. The team’s second power-play unit also did not create too much in the way of scoring chances.

Persistence pays off for @jeberle_7, as the @NYIslanders strike first! #Isles pic.twitter.com/lyjweMcsVw

6. The Islanders penalty kill was also forced to kill a late delay of game call on Leo Komarov. The officials didn’t appear to appreciate how long it had been taking Komarov to get a new stick from the team bench with less than two minutes left in the game.

Trotz did fess up after the win, indicating the league was right in trying to speed up the game and that Komarov had been caught trying to take his time after the Islanders iced the puck.

“I think Leo was trying to buy a little time there for his teammates,” Trotz said. “The referee sort of called the bluff, if you will. That happened a few games back where we had the advantage on that. The league is being stern on that.”

7. Several players extended their individual streaks on Thursday. Bailey recorded a point in his eighth consecutive game. Nelson’s goal was his seventh of the season extended his point streak to three games and Johnny Boychuk played in his 600th career NHL game.