MLS playoff preview: Which teams will advance to conference championship? 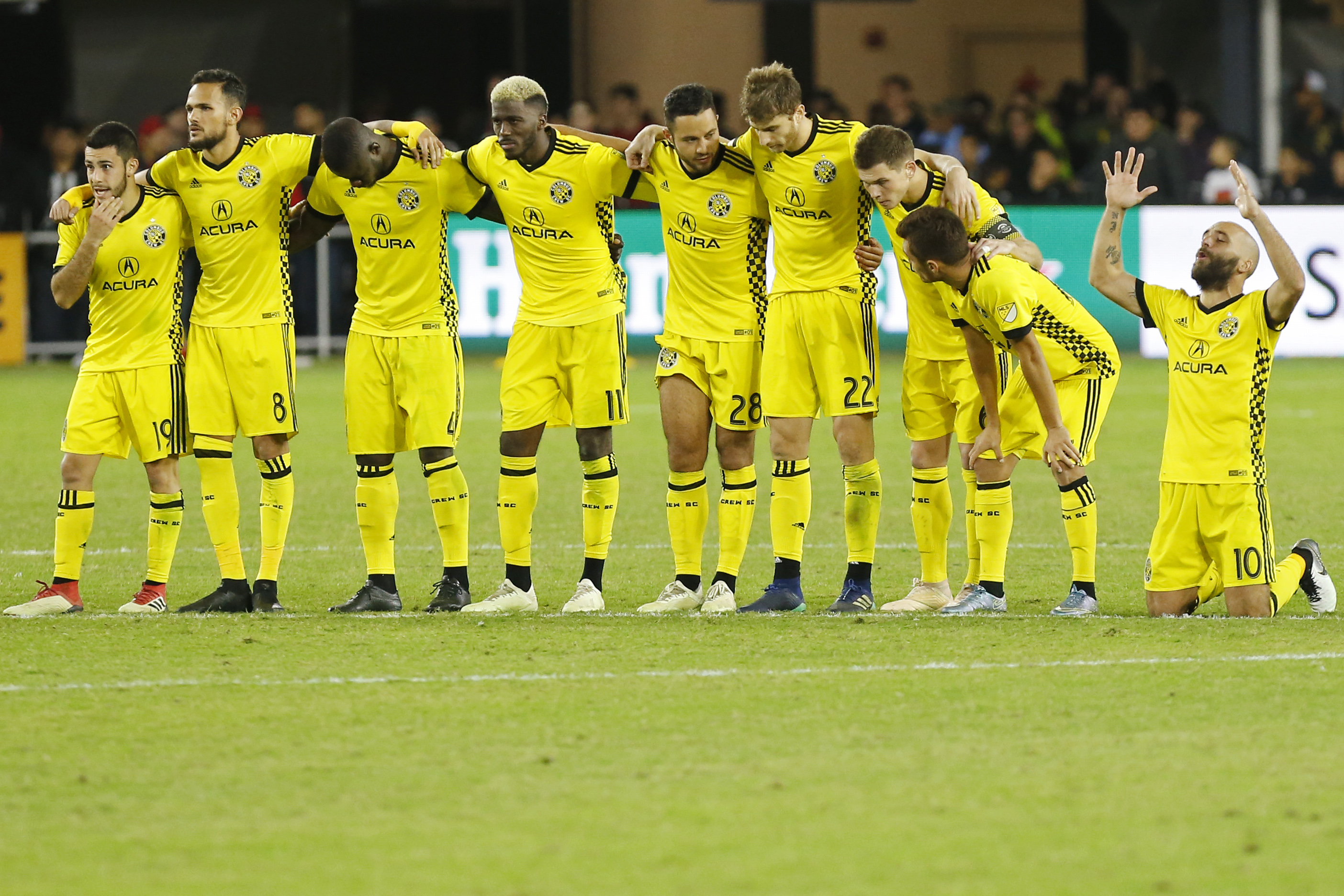 MLS playoff preview: Which teams will advance to conference championship?

With the knockout stages completed, the remaining MLS playoff contenders begin their home and away matches on Sunday. Eight teams are left to compete for the final two spots for the MLS Cup on Dec. 8. No one can be certain which teams will advance, given that three of the four knockout stage teams to advance to the current round of play were considered underdogs. Let’s take a closer look at the eight remaining teams and predict who will go on to the conference championship.

Columbus Crew SC vs. New York Red Bulls: After a crazy year that saw the Crew moving to Austin, Texas and then receiving a last-minute reprieve to remain in Columbus, credit manager Gregg Berhalter for keeping the squad focused throughout the season. Qualifying for the playoffs against a red-hot DC United team on the road, the Crew played a workman-like 120 minutes before beating United on penalty kicks. Their offense is spearheaded by Gyasi Zardes, who led the Crews’ last-place offensive production with 19 goals. Gonzalo Higuain had both goals against DC, but at age 34, he looks tired this late into the season and others will need to contribute mightily for the Crew to advance. While expectations are high that designated player Pedro Santos will contribute more offensively from his midfield spot, he appeared to suffer a pretty significant injury on Thursday night and is questionable at best for this Sunday’s game.

For the Red Bulls, who clinched the Supporters’ Shield this year, their offensive is led by striker Bradley Wright-Phillips, who is the MLS all-time leader in goals scored during the regular season. He is ably supported in the midfield by Tyler Adams and Kaku. Look for Columbus to cede time of possession to the Red Bulls while absorbing their offensive pressure in almost a bunker-like formation, awaiting counter-attacking situations. While that was successful against DC United, manager Chris Armas and the Red Bulls will be prepared for such a tactic and will advance to the next round of play by a 5-3 aggregate score.  The Red Bulls seem poised to advance all the way to the MLS final, perhaps ending the epic joke circulating the league: “Why do Red Bulls come in cans?” “Because they have no cups.” Zing!

New York City FC vs. Atlanta United: After their early season success seemed to ebb with the resignation of manager Patrick Vieira, new manager Domenec Torrent has his squad surpassing the level they were at in the first half of the season.  With David Villa, Maxi Morales, Ismael Tajouri-Shradi and 20-year-old midfielder Yangel Herrera finally healthy, NYC seems like a tough team to defend against. Their defense is led by Alex Ring and Anton Tinnerholm.  Atlanta United has a treasure trove of offensive stars. But with league-leading goal-scorer Josef Martinez’s output slowed and Miguel Almiron hurt and unlikely to play in the first round of play, there will be more pressure on Ezequiel Barco and Tito Villalba to produce goals for Atlanta.  But Barco has been a disappointment this season, and Villalba has had to deal with a host of injuries this season. Then there is the issue of manager Tata Martinez leaving Atlanta after the season, which could very well have been at least partially responsible for some subpar results since the news of his departure leaked out. While NYC is not a solid road team in terms of results, look for them to eke out a tie in Atlanta while beating Atlanta at Yankee Stadium en-route to a 4-3 aggregate win and seeing NYC through to the next round of play.

Portland Timbers vs. Seattle Sounders: After a string of 15 straight unbeaten matches from April through August, the Timbers seemed to slow down towards the end of the season but managed to hold on to a playoff spot. Having to play against Dallas in a single-elimination match, they beat the odds and defeated FC Dallas 2-1, with their star Diego Valeri scoring twice for the Timbers. Portland will rely heavily on their defense, with Liam Ridgewell anchoring their back line and David Guzman the defensive quarterback in the midfield. First year manager Giovanni Savarese, having arrived from the now-defunct NASL New York Cosmos, has a solid understanding of his team’s abilities and relies on a counter-attack to keep them competitive.  And with most of his starters age 30 or older, expect Portland to show a sense of urgency to their play. For Seattle, they had their usual season, tanking in the first half while breaking an MLS record for the most points earned in a half-season the second half off the season. The Sounders’ main offensive weapon is Raul Ruidiaz, who was a mid-season addition. Having scored 10 goals in 1100 minutes, he is the Sounders’ go-to guy up front. Alongside Ruidiaz is Spaniard Victor Rodriguez, who scored four goals and had four assists in the final five games of the regular season. Along with Ozzie Alonso, Nicholas Lodeiro and Gustav Svensson in the midfield, the Sounders team will be bent on revenge after losing in last year’s MLS Cup.  This is the Cascadia Derby of the playoffs and look for Seattle to beat the Timbers on aggregate 5-3.

Real Salt Lake vs. Sporting Kansas City: Manager Mike Petke of Real Salt Lake should be in the next commercial installment of “We Love LA”.  After losing to Portland two weeks ago, RSL had a bye the final week of the MLS season while the Los Angeles Galaxy played at home against the lowly Houston Dynamo. With the Galaxy needing a win to advance to the playoffs and knocking out RSL, Zlatan Ibrahimovic and Co. set out to defeat the Dynamo and punch their ticket to the playoffs.  But someone forgot to tell Houston, who beat the Galaxy 3-2 and propelled RSL into the knockout stage of the playoffs. Matched against heavily-favored LAFC, RSL cobbled together a brace by unsung hero Damir Kreilach and an own goal by Walter Zimmerman to beat Bob Bradley’s LAFC team 3-2 while being outshot 21-4. Their reward is a home and away match against Sporting Kansas City, the top-seeded team in the Western Conference with a goal differential of +25. While SKC also has a veteran MLS manager in Peter Vermes, they are a very different team than the one RSL faced in Los Angeles. SKC lacks the speed of LAFC and play a more deliberate style of soccer. The last match between these two teams saw RSL beat SKC in Utah 4-2, a loss that did not go unnoticed by Peter Vermes. Look for right back Graham Zusi to push up perhaps to the midfield and no further, ceding to midfielders Roger Espinoza and Felipe Gutierrez the job of spraying the ball out wide to wingers Daniel Salloi, Johnny Russell and Gerso Fernandes.  This should create offensive opportunities for Sporting KC while maintaining a solid back line. In the end, both matches will be close, but SKC will advance by an aggregate score of 4-3.