Wizards' defensive effort rises to the occasion in much-needed win 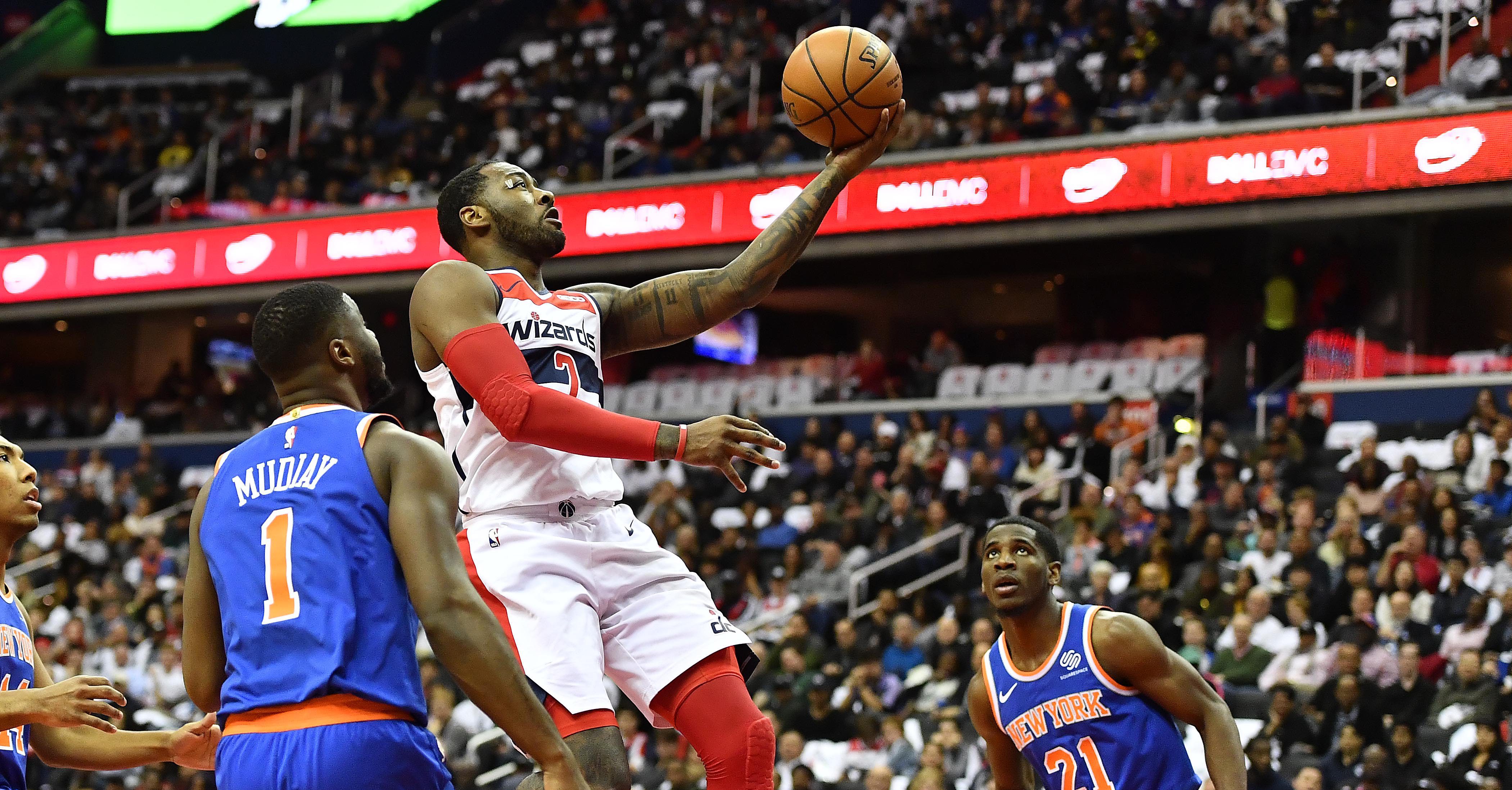 Wizards' defensive effort rises to the occasion in much-needed win

The Washington Wizards needed a victory in the worst of ways even if just to get morale up in the locker room. With the New York Knicks clearly not competing for anything crazy in the East, they provided an inferior opponent for Washington to take advantage of. From beginning to end with a quick hiccup in between, the Wizards won and secured their first home victory in what was a decently sized pro-New York crowd.

The success for Washington night in and night out will depend mainly on their defensive effort. Although there were still a handful of lapses on Sunday night, as John Wall admitted, there was a better showing throughout the game. In both the first and fourth quarters, the Wizards held the Knicks to just 17 points. This allowed the home team to build an early lead and then close things out after New York had tied things up. Bradley Beal tied his career-high with four block shots and John Wall had five steals. The Wizards forcing 20 turnovers and converting them into 22 points is just one example of defense being their best offense. The three-point defense, in particular, was solid with better closeouts leading to the Knicks shooting just 5-of-27 from deep (18.5 percent). Holding an opponent to under 100 points for the first time this season was what made Scott Brooks most happy. Keeping such a defensive effort going moving forward is the million dollar question, seven million if you are Brooks.

“That I didn’t see triple digits,” Brooks said about what he liked most. “It was nice to see below 100. We haven’t seen that. I think the guys competed. We started off the game with our best defense of the early season and then we finished that. We’ve had some struggles in the fourth quarter stopping teams and they had a couple of hot players, small guys that were attacking. Their wing players were attacking and I thought we took the challenge to guard the guys individually and not look for help and moved your feet. Seventeen points in the fourth quarter defensively. That’s about as good as we can get.”

“We challenged,” Brooks continued specifically about the three-point defense. “We treated everybody as a hot player, no matter who he was. We wanted to make sure we made him miss shots. It sounds easy. Don’t take this like we haven’t been talking about that the first seven or eight games. We’ve been talking about it, but we did it tonight. It’s a start. It was a good win, when you have a losing streak, the games become heavier and heavier. It was nice to get a win. Guys been working hard the last couple days. We got beat pretty bad last game and took some pride to come back and win tonight.”

In case you didn't know, the #Wizards are good in transition. Getting stops has been there issue. pic.twitter.com/BJofJJVAff

If All-Star voting ended today, Wall’s streak of appearances would probably end at five. If he strings together more performances like tonight along with better on-ball defense, the streak will stay alive. The point guard had 26 points on 9-of-16 shooting to go along with seven assists. Not crazy impressive, but when Washington needed him most, he came through. After New York tied things up at 84, Wall came through with a 15-foot pullup jump shot followed by a driving layup two possessions later to put the Wizards up for good. He assisted on Beal’s midrange jump shot on Washington’s next score for good measure. In the second half, Wall had 17 points on 6-of-8 shooting, after seeming a little frustrated by a couple of no-calls in the first half.

“He took over with playmaking,” Brooks said about his point guard. “He took care of the basketball. He sprinkled the offense all the way around. He had Dwight (Howard) a couple times, he had Brad (Beal), he had Austin (Rivers), he had Jeff (Green) for the lob. And he took a jump shot himself, but when we do that, we are hard to beat, cause you don’t want the (opposing) team to know that it’s so predictable. With our angle pick and roll, he had everybody involved.”

After shooting 37.5 percent from beyond the arc last season, third best in the NBA, Washington is shooting a woeful 31.3 percent nine games into the regular season. Even during preseason they were not shooting well from deep. If you ask Brooks, they are simply having their shooting slump early in the season, but it is getting to a large enough sample size now that maybe the Wizards are just not as good of a shooting team. Otto Porter did not play with a left toe contusion, but he is just shooting 28.1 percent (9-of-32) from deep. Wall got out of a bit of his slump with a 3-of-6 performance from three after coming in with a 24.3 percent mark (9-of-37). Beal and Markieff Morris going 1-of-12 from deep against the Knicks is probably an anomaly. We will see how things play out in the coming weeks, but Washington has yet to outfire power any teams because of their poor shooting, which is a big reason why there is such a big magnifying glass on their defense.

Next Game: Washington will head back on the road with a matchup against the Dallas Mavericks and Rookie of the Year frontrunner Luka Doncic.