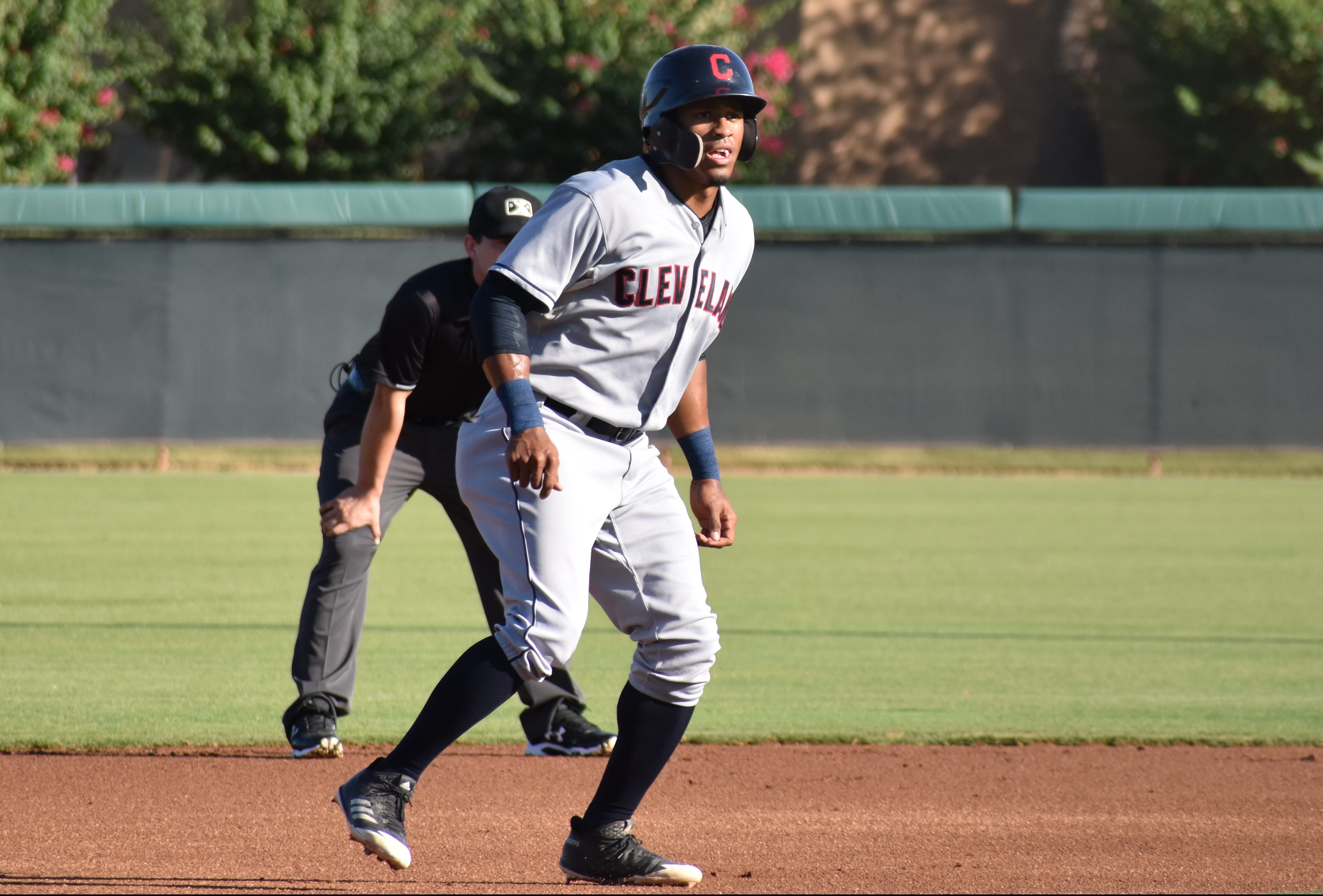 A man with no position, Reeves was drafted as an outfielder, then quickly moved to first due to his lack of range. He hasn’t been exactly a Gold Glover there either, notably committing four errors in his first two games at the position in Lake County.

What he lacks for in glove, he makes up for in bat, however. One of the top hitters on his AZL team in 2017, Reeves was a short season All-Star in his second year and finished the season with a .276/.358/.391 line. His strike out rate decreased dramatically between seasons one and two and he remains a solid OBP threat. He hits the ball hard, but needs to work on creating more lift to become a true power hitter. If he improves that along with his defense, he will be a steal considering he lasted until the 32nd round.

Longo is a difficult player to evaluate. He had good enough speed to steal 38 bases over the last two seasons and has only been caught 9 times, but defensively looks like a poor outfielder. In addition, he saw a huge uptick in strike outs this year despite no real addition of home run power. Offensively, he gets on base enough and hits enough doubles to make up for those negative traits although he’s not really blowing anyone away. At the moment, it appears that he could be another Mike Papi (or Brad Snyder if you’re older). He is ranked above Papi in the Indians system, however, because he’s three years younger and so has greater potential.

The Indians had 13 different pitchers who were primarily relievers and finished the year with an ERA below 2.00 with at least 15 IP, so it can be a bit hard to differentiate. Making things even more difficult is that six of those pitchers were drafted in 2018. A couple appeared in the previous ten and a few more between 50 and 100, but Pinto marks the entrance into the more elite relievers of the 2018 draft.

The stocky right hander has good velocity and command, striking out 9.8 per nine and walking just 1.6. The fact that he didn’t allow a home run isn’t odd for the Arizona League, but that he allowed just a .257 slugging percent and five total extra base hits is elite. He struck out a batter in every appearance in 2018 except for three and once K’d 6 in 2.2 perfect innings. It’s possible the early success by so many relievers had to do with the Indians focusing on college pitchers and using them in Arizona, which is primarily filled with high school draft picks and international signings, but having seen Pinto extensively, his numbers seem to be fully supported by his abilities.

The perfect compliment to Pinto from the right side during the 2018 AZL Indians 1 season was Rholl from the left and I’m going to keep them together here. Also 22 years old, Rholl had a 10.5 K/9 as hitters were completely confounded by his side arm delivery with plus movement on every pitch. This movement does make it harder for him to consistently throw strikes, but I don’t believe this will be a problem long term as he gets more experience in the professional ranks.

Rholl was dominant against all hitters, but against left handers he allowed a .077/.278/.077 line that perfectly shows how he needs to bring his walks down, but is nearly impossible to square up. What’s really incredible is that Pinto and Rholl were picked in the 24th and 25th rounds of the draft and still appear to have so much value out of the bullpen.

With an extremely high strike out rate, a lot of walks, plenty of speed and a ton of power, the 28th round pick from the 2018 draft is essentially what Will Benson was supposed to be. Despite hitting just .219, Wilson lead his AZL team in home runs with 10, the second most ever in AZL Indians history, and managed to reach base in nearly 34% of plate appearances. He stole successfully in 15 of 19 attempts during his rookie season and played a truly incredible defensive center field.

It was just one season, but Wilson could not have done much more to impress in his first 51 games. Already 22, Wilson was one of the group promoted to Mahoning Valley to end the season and could be sent straight to Lake County next year without playing a full season with the Scrappers.

Yannuzzi looks in for the sign during a 2018 AZL Indians 1 game. – Joseph Coblitz, BurningRiverBaseball

The Indians MLB rotation has been essentially 100% right handed since Scott Kazmir left after 2013, so it’s very exciting to see so many left handed starters on this list (there are more to come including one tomorrow and one in the top ten). Yannuzzi is more than a lefty with a funny name, however. He was converted to starter in 2017 in the DSL and was very dominant, leading to a promotion to the Arizona League in 2018 where he became the ace of the AZL Indians 1 team. There, he had a 2.21 ERA with 42 strike outs in 36.2 innings.

While Yannuzzi misses a lot of bats, he doesn’t have incredible stuff and can get in trouble when he falls behind. He allowed three home runs in the AZL this year and two more in his limited time in Mahoning Valley. I think he will continue to have success through the lower minor levels, but worry that he doesn’t have a Major League repertoire. This is obviously something that can be improved upon, but leaves him behind many other Indians starters in terms of ceiling.

Martinez didn’t get his professional career started until he was 20 years old, very late for a rookie in the Dominican Summer League, but has managed to reach AAA by the age of 24. While he didn’t pitch in Columbus long, his extensive work in Akron (32 K, 9 BB in 32.2 IP) improved upon his solid showing in Lake County last year. While not as well known as some of the early 2018 draft picks, Martinez could be one of the earliest into the fray in 2019 when the Indians will undoubtedly need bullpen help. He doesn’t have as high of a ceiling as Nick Sandlin or Adam Scott, so the Indians may be more willing to use up service time and options to get a good look.

Rodriguez takes off from second during a 2018 AZL Indians 1 game against the AZL Reds at Goodyear Ballpark. – Jennifer Coblitz, BurningRiverBaseball

There are publications that have Rodriguez as one of the Indians top prospects, not sitting in the mid-30’s behind a guy who was a catcher who couldn’t hit prior to 2018, but I’ve seen him as much as anyone and can’t corroborate that story. I see a naturally good hitter who is lazy and forgetful on the bases and in the field. He has a ton of potential, but seems to be unmotivated to find it. If he had come roaring out of the gate last year, he would at least have been in Mahoning Valley, yet the team held him back in Arizona while nearly all of his 2017 teammates and many 2018 draft picks were promoted.

How do you rate a player who has the ability, but doesn’t put out the effort compared to a player who doesn’t have the ability, but puts out all the effort? I rate him in the middle of the pack. To give the opposite side, his teammate in each of the last two seasons, Ronny Dominguez, goes all out on every play and is extremely fun to watch, but fell from #57 last year out of the top 100 in this year’s ranking because it is unlikely that his career will last much longer. It also shows what the Indians value in a player as Dominguez was one of the players who was promoted to Mahoning Valley this year despite having significantly worse offensive statistics compared to Rodriguez.

Jerez prepares to swing at a pitch during a 2018 AZL Indians 1 game at Goodyear Ballpark. – Joseph Coblitz, BurningRiverBaseball

I don’t believe I’ve ever seen a position change so dramatically successful as the one Jerez undertook this season since Carlos Santana moved to first base. A defensive liability behind the plate, Jerez was moved to left field, then first base this year where he became an asset, not committing an error in over 100 total chances between the two positions. As with most catchers, Jerez isn’t particularly fleet of foot, but he is still very athletic and can handle either new position.

Of course, it isn’t his glove that gets him on the prospect rankings for the first time, but his bat. After hitting two career home runs in his first two seasons, Jerez blasted an AZL Indians record 14 in 48 games with 11 doubles to go with them. He lead the state with a .577 slugging percent and held a respectable .360 OBP as well. All this power has seemingly come out of nowhere and Miguel’s still a growing boy.

In the 2017 rankings there were two Mejia’s with another considered the Tribe’s top hitting prospect, although he didn’t qualify for the list since he had already made his MLB debut. Now, it’s down to one.

Jean Carlos was a relief pitcher over his first four seasons and was largely known for his great command. This season he was converted to a starter and immediately took to the new role. It took just seven appearances before he was regularly throwing six innings per start and he even had consecutive seven inning, one walk, ten strike out shut outs in late July. Despite never pitching as many as 40 innings in a season, Mejia reached 98 while striking out 100 and walking just 21. The Indians already had a surplus of talented starters in the lower minors and Mejia has immediately entered himself into the middle of that list.