Comeback Too Little, Too Late in 4-3 Wild Loss to San Jose 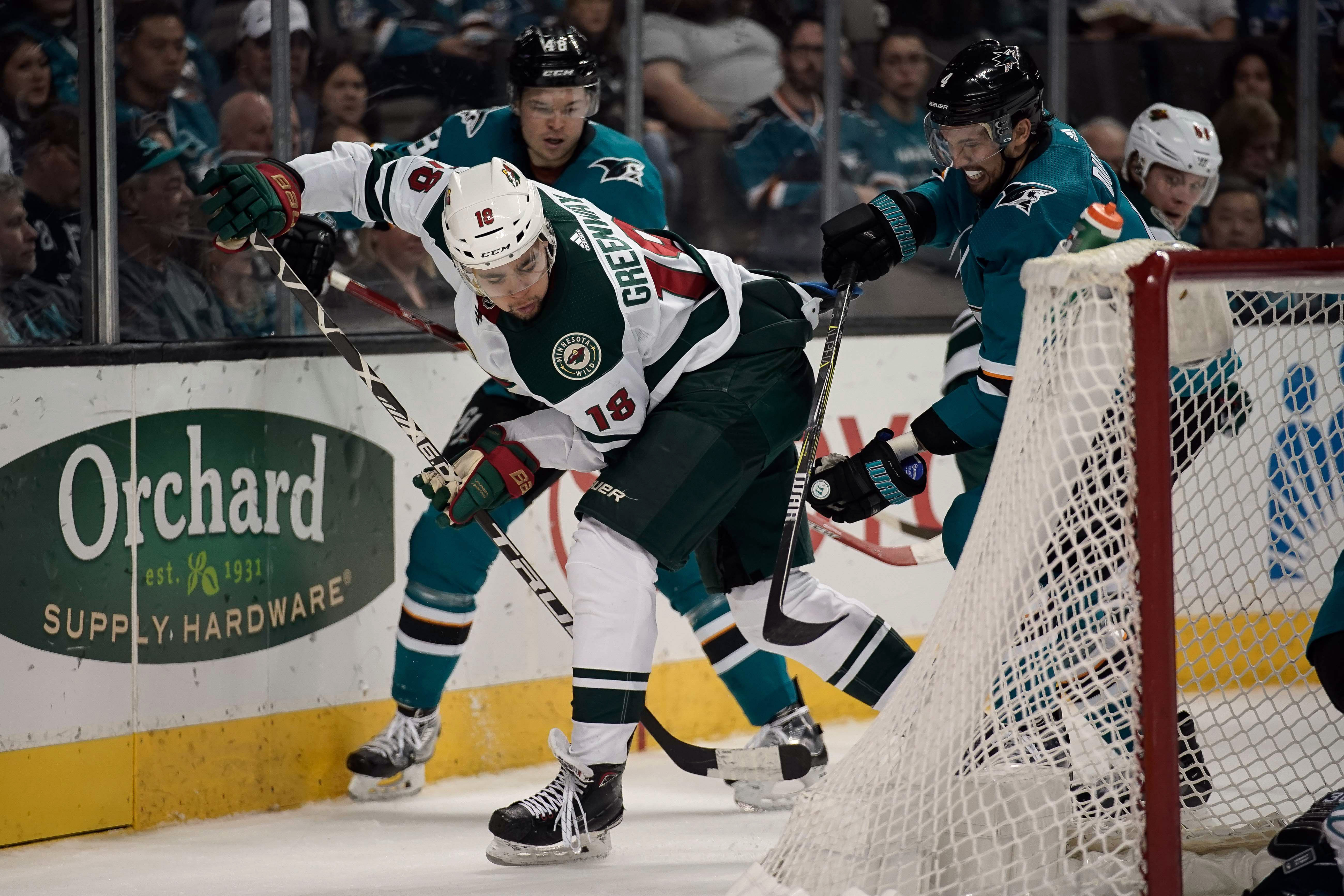 Comeback Too Little, Too Late in 4-3 Wild Loss to San Jose

By the end of this week, the Wild will have traveled more than 7,000 miles as part of this 7-game road trip.  Long travel is a given for Western Conference teams and its a test of their stamina, mental focus and day-to-day preparation.  So far, the Wild seem to be handling life on the road fairly well (knock on wood).  The Sharks are coming off an overtime win against Philadelphia while the Wild are hoping to build on what was their best effort of the season.

In pro sports, the axiom is always “what have you done for me lately?” and now the Wild’s biggest challenge will be to repeat their terrific effort against the Blues to finish out the last 4 games of this road trip.  Everyone on the team will be asked to dig deep but an opportunity exists to pull away from the pack.  Can the Wild earn another big road win?

1st Period Thoughts:  The Wild had reasonable jump to start the game and were able to work pucks deep on their first few shifts.  Jordan Greenway would work the puck to Eric Fehr for a quick shot that was steered aside by Martin Jones.  The Wild appeared to be playing well, but one lapse in effort would cost them in a big way.  Nino Niederreiter lost Marcus Sorensen who was found with a great cross-ice pass by Brent Burns that made for an easy tap in goal.  1-0 Sharks with Nino only slowly gliding and reaching towards Sorensen.  Devan Dubnyk was caught way out of position by Burns’ great pass.  Minnesota would work for the equalizer and they had a few chances, one on a partial breakaway by Greenway that was foiled by a poke check by Martin Jones, and then a 2-on-1 between Matt Hendricks and J.T. Brown that had Brown firing a shot off the rush that the Sharks goalie blocked away.  Minnesota would earn the first power play of the game as Joe Pavelski who knocked down Charlie Coyle in the slot.  Minnesota struggled to get set up in the Sharks’ zone on the man advantage which is no real surprise considering how good San Jose’s penalty kill is.  The Wild kept skating pretty well minus Nino Niederreiter, generating shots and applying reasonable pressure as evidenced by Minnesota’s 8-2 shot advantage.  Not a lot of whistles and the period flew by quickly.

2nd Period Thoughts:  The game would open up in the 2nd period with the Sharks asserting their speed more and Minnesota would find themselves a bit flatfooted at times.  Minnesota’s best line was their 4th line of Matt Hendricks, Marcus Foligno and J.T. Brown who hustled well, forced turnovers and then quickly went on the attack.  This line was pretty pesky and they gave the Sharks problems.  Unfortunately, none of the other lines really gave this kind of total effort.  The Sharks would add to their lead where another lazy play by Nino Niederreiter who took his time to make a line change that gave the Sharks a chance to attack as Sorensen pulled the trigger on a shot that deflected off Joe Thornton and by a confused Devan Dubnyk.  2-0 Sharks.  Minnesota would cut the lead in half on the power play as Koivu fed a puck to Niederreiter in the slot who shoveled a shot on goal that Jones stopped but an alert Zach Parise was there to fire home the rebound.  2-1 Sharks.  The 4th line continued to attack as Brown found a little room behind San Jose’s defense for a breakaway that Jones stopped and then he denied Foligno as he crashed the crease.  The Sharks would get their own odd-man chance as Antti Suomela got behind Minnesota’s defense and he’d move in lift a shot by Dubnyk.  3-1 Sharks.  On the very next shift, Suomela again broke free and Dubnyk was able to sprawl and come up with a big save to keep his team within two going into the 2nd intermission.  It was sort of telling that the Wild played their 4th line in the closing seconds as they continued to hustle and create havoc while the big money skill lines watched from the bench.  Minnesota has too many passengers right now, unless that changes they’re going to end up on the wrong side of the score.

3rd Period Thoughts:  The Wild got off to a fast start in the 3rd period as a good battle for the puck down low by Eric Fehr and Mikael Granlund ended up going out to the point where Jared Spurgeon stepped into a slap shot that beat Jones cleanly.  3-2 Sharks.  Minnesota would tie the game just a few minutes later as the Wild again drew the Sharks’ defenders down low which left Matthew Dumba all alone at the point and he wired a slapper by Jones.  3-3 game.  The crowd was noticeably anxious after Dumba’s goal and the Wild appeared to be poised to take the lead for the first time.  But it wasn’t meant to be, as Jonas Brodin was guilty of a careless pass to no one from deep in his own zone which Brent Burns hammered a slap shot that buzzed by a screened Dubnyk giving San Jose a 4-3 lead.  The Wild just didn’t seem to have enough gas in the tank to really challenge the lead.  Minnesota couldn’t win the races to the loose pucks or gain just enough space to get shots off cleanly on goal.  Even when they pulled an extra attacker they just lacked the burst necessary to get that tiny bit of room they needed and thus they fell 4-3.

Iowa was hoping for a 3-games-in-3-days sweep on Sunday when the Rockford Ice Hogs came to Des Moines.  Rockford would jump out to a 1-0 lead as Dylan Sikura ripped a shot by Andrew Hammond.  The Ice Hogs would extend their lead about a minute later as Anthony Louis would score off a turnover in the offensive zone.  2-0 Rockford.  Iowa would cut the Ice Hogs’ lead in half when Matt Bartkowski converted a 3-on-1 rush after a nice pass by Cal O’Reilly.  Iowa would tie the game up on the power play in the 2nd period as Kyle Rau banged home another nice feed by O’Reilly.  Unfortunately, this would be the start of long parade to the penalty box for Iowa.  Iowa is a decent penalty killing team, but being shorthanded was bound to catch up to them as Jacob Nilsson scored off a rebound late in the period on the power play to give Rockford a 3-2 lead going into the 3rd.  In the 3rd, Iowa kept finding their way into the sin bin, and they had no gas left in the tank to really mount a serious comeback.  Anthony Louis would score an empty netter to seal a 4-2 victory for the Ice Hogs.  Hammond had 35 saves in the loss.

D – Jacob Golden (London, OHL) ~ the defenseman netted his first goal of the season, earning 2nd star honors as London prevailed 6-5 in a shootout over Owen Sound.  Golden has a goal, 2 points, 2 PIM’s and is a -4 in 12 games.

LW – Brandon Duhaime (Providence, NCHC) ~ the junior forward had an empty netter in Providence’s 3-0 win over Holy Cross on Saturday.  Duhaime has 3 goals, 4 points, 6 PIM’s and is a +5 in 7 games.

C – Alexander Khovanov (Moncton, QMJHL) ~ the talented Russian was profiled a bit in the Hockey News‘ recent prospect issue and he delivered in the clutch for the Wildcats on Sunday by scoring the game winning goal in overtime to earn a 3-2 win against rival Halifax.  He also had 6 penalty minutes.  Khovanov has 10 goals, 22 points, 28 PIM’s and is a +3 in 18 games.

C – Andrei Svetlakov (CSKA Moscow, KHL) ~ the player referred to by Wild General Manager Paul Fenton as “the other kid” in his comments about going to Russian didn’t do much make him take note of his name going a woeful 3-for-12 on his draws with no shots on goal in CSKA’s 3-1 win over SKA St. Petersburg.  Svetlakov has 2 goals, 4 points, 15 PIM’s and is +5 in 18 games.

LW – Kirill Kaprizov (CSKA Moscow, KHL) ~ Fenton also stated during that aforementioned interview that he wanted Kaprizov to know the Wild felt he was very, very, very (yes 3 of them) important to the organization.  The Russian-winger had a pretty mundane game in front of his new boss with just 1 shot on goal and a tripping penalty to his credit.  Kaprizov has 10 goals, 17 points, 10 PIM’s and is +13 in 24 games.