Recap: Kyrie Takes Over in OT as Celtics Steal a Win from Suns 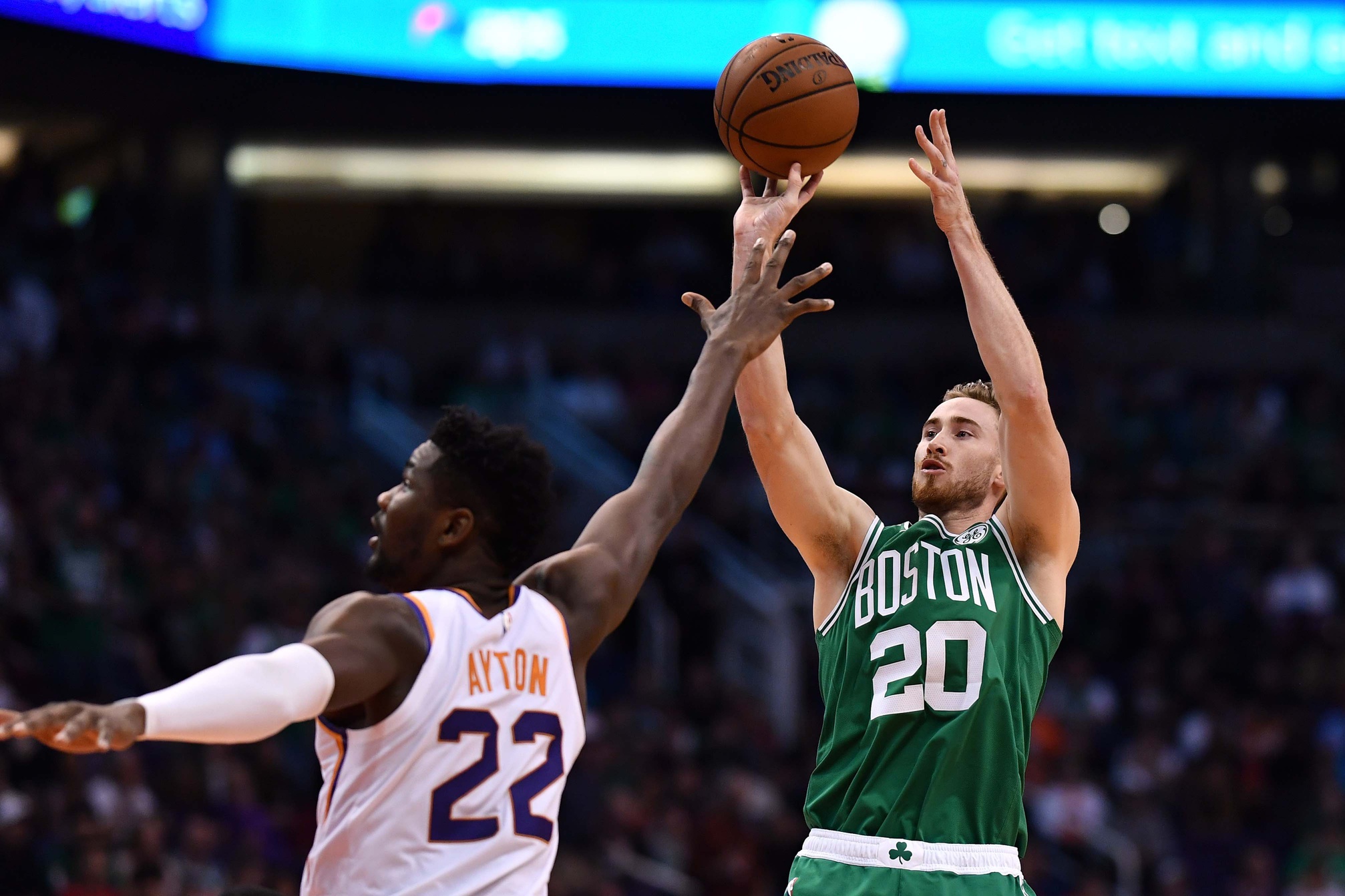 Recap: Kyrie Takes Over in OT as Celtics Steal a Win from Suns

HOLY SHIT- what a win. The Celtics were dead in the water. They played uninspired ball for much of the night and were destined to lose their third straight game right up until the final few minutes of regulation. Instead, they turned it on in a flash and came storming all the way back from a 22-point deficit to hand Phoenix their ninth loss in their last ten games.

Kyrie Irving led the way with 39 points, including 18 in the 4th quarter and OT, and the Celtics leave Phoenix with the improbable 116-109 win.

Hey, guys, I have this crazy idea that might help win some games… let’s make shots, maybe? The Celtics started out cooler than the other side of the pillow (shouts Stuart Scott) and missed 12 attempts in a row following Kyrie’s game-opening three. Luckily, Aron Baynes tip-in following a Kyrie miss mercifully ended their drought, but not before the Suns could open a healthy 10 point lead on their home floor.

The Suns recent top pick, DeAndre Ayton, showed off his touch with a jumper and bullied the Celtics down low a couple times, but the Suns mostly leaned on TJ Warren to begin the game (14 pts in Q1). As has been the case for the Celtics during this young season, they missed multiple wide open threes (looking at you, Gordon and Jaylen), and Marcus, Terry, and Kyrie were the only people that seemed to have brought any offensive aggressiveness early tonight. The Celtics looked terrible all-around and went into the second quarter losing 32-13.

The worst team in the league just put up a 32 point opening quarter against the alleged best defense in the NBA. Missing open shots is one thing.. letting TJ Warren smoke you for 14 is inexcusable

The Suns are known for their carelessness with the ball, so when the Celtics forced “only” 3 turnovers in the first quarter they probably felt pretty good about themselves. That is, until the law of averages came for them in Q2. Within the first 5 minutes of the second quarter, the Suns had already turned the ball over four times and they were just DYING to let the Celtics back into the game.

Unfortunately, Boston couldn’t pounce on the opportunity- they had to make it more difficult for themselves first. Not only were they missing wide open three’s, but it seemed like they missed a million layups over the course of the game (they were an abysmal 5 of 23 from the paint in the first half).

The Suns went into Q3 leading 55-25, but that doesn’t even begin to tell the full shit-storm of a story… The Celtics had only 5 assists in the half and they shot just 21.4% from deep, which is only SLIGHTLY worse than their 21.7% from the field. Meanwhile, the Suns were on fire (sorry, I couldn’t help myself) and they made exactly 50% from deep while shooting just over 51% from the floor. Boston looked like a shell of the team that we’ve come to know and love, and Stevens had just about enough of their lackluster effort.

There was nowhere to go but up from that first half, really, and so the offense bounced back at least somewhat. Jaylen Brown picked up his aggressiveness and started consistently bringing the ball to the hoop. He’d either end up finishing with authority or he’d be sent to the line, which was encouraging, and Brown finished with 8 points in the quarter. The defense, on the other hand, still looked utterly lost out there, and the deep ball still mostly refused to fall for Boston on the other end of the court. The Celtics were shooting better from the field overall, but they still found themselves down 15 going into the final frame, 80-65. It seemed that every time they brought the game within a dozen or so, the Suns would go on another quick 6-0 run. It was just one of those nights.

Or so it seemed. But this is Boston we’re talking about, folks, so we know they’re not going to go down without a fight, right? Marcus Morris got the party started by hitting a three to make it 12 point game at the beginning of Q4. Rozier followed that up with one of his own just a few plays later, and the Celtics managed to hang around the 10 point mark until the defense eventually started applying enough pressure to force turnovers and misses necessary for their comeback.

Phoenix went a full 5 minutes without scoring a single point mid-way through the fourth; meanwhile, Boston, led by Jaylen Brown, kept attacking the rim, and Kyrie’s deep balls started to drop with more consistency. Eventually Irving officially put on his superman cape and drilled a trey to put the Celtics within a possession, at 98-95. Despite playing like trash and trailing by 17 with just seven minutes remaining, Boston looked like they could really steal this Win.

But it’d come down to defense.

The next play down the court, with the final seconds ticking away, Kyrie provided Jaylen with the help defense and stripped the spectacular Devin Booker (who scored a personal season high 38 points) and pushed the tempo on the break. He found a trailing Jaylen Brown, who was blocked on his first attempt, but recovered the loose ball in time to make it a 1 point game with about 7 seconds remaining (Sidenote: Jaylen deserves a lot of credit for the way he bounced back tonight, scoring 17 points on 6/8 shooting after halftime).

Of course, Boston fouled on the next possession and the Suns hit both free throws. No matter. The Celtics called timeout to advance the ball to half-court, inbounded the ball to Kyrie who quickly drew the double team, pump faked his defenders out of their shoes, then passed to a WIDE open Marcus Morris who ACTUALLY DRILLED A WIDE OPEN THREE ATTEMPT! The game was tied at 100 and the entire Phoenix organization had to be STUNNED at this point.

Once down 22-points, this @jetblue Play of the Game goes to the clutch triple by @MookMorris2 to force overtime. pic.twitter.com/gBr4aeJwNn

Boston hadn’t led since Kyrie’s opening shot made the game 3-0, but Mr. Irving continued his magic into OT and quickly put the Celtics in the driver’s seat with a finish at the rim to make it 102-100. Jaylen Brown and Marcus Morris later kicked in a couple threes and the Celtics had eventually ripped off 12 makes on 12 straight trips down the floor. The Suns hung around for  and matched Boston point for point during the first couple of minutes of OT, but they couldn’t keep pace with the hot streak and succumbed to Boston’s now-swarming defense over the final few minutes of extra-time. Boston straight up STOLE this game in Phoenix. Final Score, 116-109.

We're not going down without a fight tonight 💪 pic.twitter.com/lGk4exRQZW

TAKES IT, MAKES IT 🔥🔥🔥 pic.twitter.com/m5YuoFRQVw