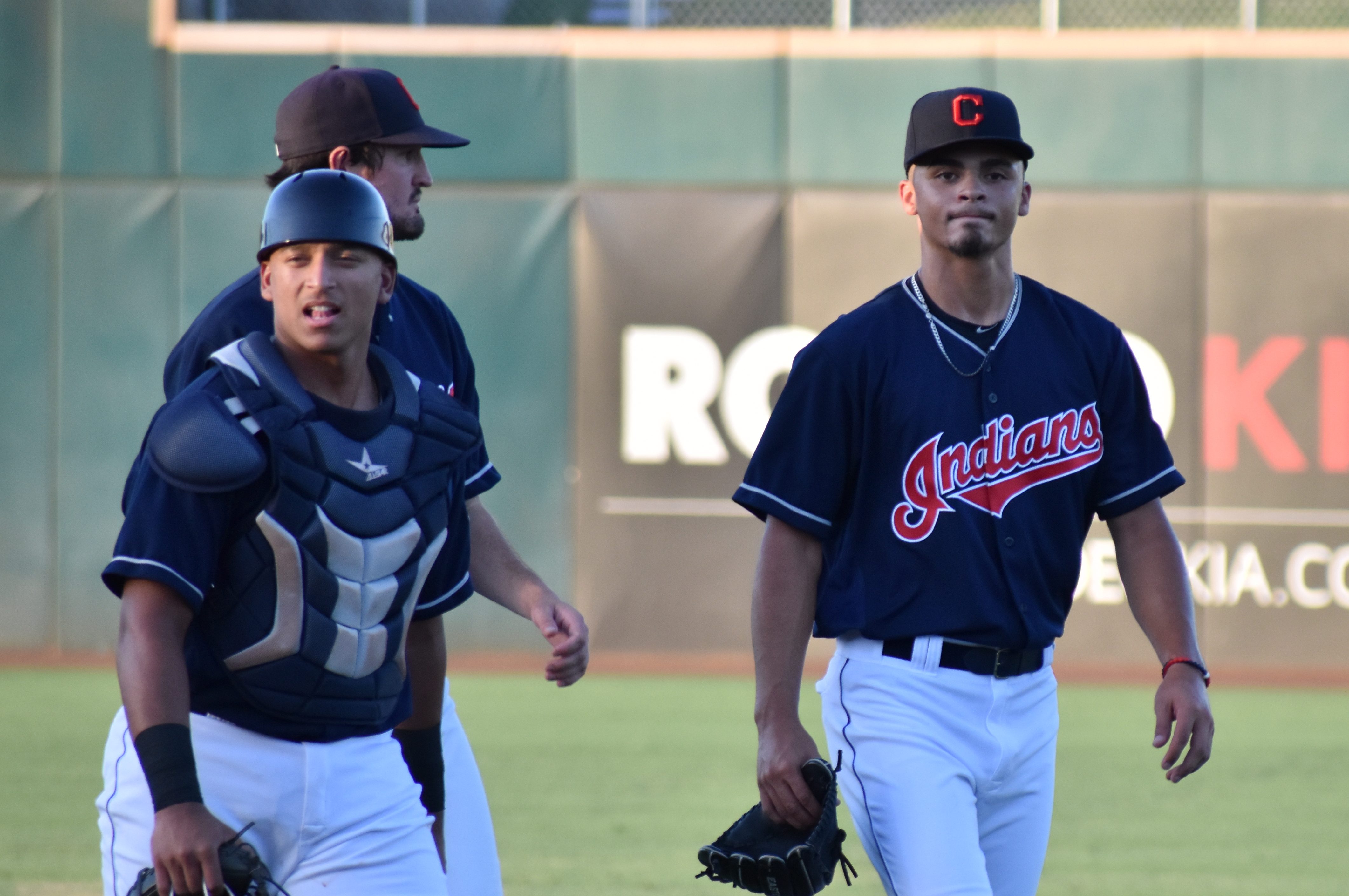 The Indians were lucky enough to get one of the most powerful bats in the 2018 at the end of the first round last June and he certainly stuck out in his first professional season. While he only hit two home runs in 33 games, he regularly pounded the ball to the warning track of the Major League sized Goodyear Ballpark.

While there is some question of whether he will stick behind the plate or move to an infield position (he’s played some third and it’s been postulated he could move to second), Naylor was a great blocker of pitches in the dirt. His struggles at catcher come in the base running game where his weak arm is a detriment, something that was also apparent in his time at third. You never want to talk about a player this young as a permanent DH, but at least Naylor can hit well enough to make up for any defensive lapses.

Hankins stands at Goodyear Ballpark while on the disabled list early in the 2018 AZL season. – Joseph Coblitz, BurningRiverBaseball

Here comes the hype train as an injury from earlier this spring kept Hankins out of all but two games this year, but Hankins is expected to be something really special. While he did allow two runs in his three innings, they came off of just one legitimate hit (a double) and two infield singles. Otherwise, he is already averaging two strike outs per inning. Since he is only 18, he will likely begin 2019 in extended spring and a real season in the Arizona League where we can really assess what he can do.

Like Hankins, it’s mostly hype that gets Torres into the top ten, but at least I’ve seen enough of him to make the assessment that the position may be deserved. Torres made six appearances in 2018 and struck out 22 to just four walks in 15.1 innings. He has both an electric fastball with good movement and a hard slider that often elicits swings and misses.

Torres just turned 18 in October and will likely need a full season in short season ball like Hankins, although his could occur at the slightly more advanced Mahoning Valley. It may seem just arbitrary that all three 2018 first round picks are near the top of the rankings, but Torres was honestly better than every other Indians rookie pitcher since Triston McKenzie and has the potential to be as good as they say he could be.

This 6’6″ lefty had a slow start to his minor league career, but now has consecutive consistent (less than 3.30 ERA, more than 9.0 K/9) seasons and looks to be the real deal. Because he was drafted at 17, he will be just 22 when he heads to Akron next year, younger than many of the 2018 draft picks. Like many power pitchers, he has trouble with control, but the difficulty hitters have in squaring him up makes that less costly. As he is not quite polished yet and is still young, the Indians will likely move slowly with Hentges and he may not see AAA until the end of 2019. That could put him on a pace to be a MLB starter around 2021, just when the years of control run out for Trevor Bauer and Carlos Carrasco.

For a time, the Indians had a pile of middle infielders who looked to be hitting the majors at the same time, but that number has essentially dwindled to one. Willi Castro was traded to Detroit and Eric Stamets has fallen off the cliff he climbed last year leaving Chang as the only infielder who will be ready in 2019.

He has always been a power hitter, but this year he added the defense that he had been sorely missing. After committing 25 errors at short stop last year, he made just 12 this season between short and third. He always had the arm and a big enough bat to play third and now that his glove work has caught up, he could legitimately be a major league starting 3B option.

If you want power, Bradley has it in abundance. Arguably the most powerful bat in the Indians system, Bradley has hit 23 or more home runs in each of the last four seasons and hit eight in 39 games during his rookie season. Extremely athletic for a first baseman, Bradley also has at least 15 doubles in each of those seasons and has stolen bases successfully in 13 of 16 attempts. He has a great glove at first and will almost certainly be the starting first baseman for the Indians as soon as Edwin Encarnacion‘s contract runs out, potentially being a part time player as early as the start of 2019.

Bradley’s single flaw is his prodigious strike out total, which is certain to drive old school fans nuts. He has absolutely improved in this manner since his 170 in Lynchburg, but he’s simply never going to be a high average hitter. While the Indians would never want to make him into a different style hitter by having him swing less than 100% every time, it is possible he could work on his pitch selection a bit to increase his walks to make up the difference.

While Shane Bieber blew past the rest of the draft class of 2017 on the way to the majors, Morgan hasn’t been slacking off. Already in high A, Morgan has a career K/9 of 10.8 to go with a 2.2 BB/9. While he struggled some late in the season with the Hillcats, that’s likely due to the increase in workload of more than 100 innings than in 2017. In fact, over his first 17 starts in 2018 he had a 1.96 ERA with 114 strike outs 96.2 innings to just 18 walks. After struggling late in the season, the Indians may prefer Morgan stay in Lynchburg at least to start 2019, but he should be in Akron before too long and could very well join Bieber in the Indians rotation by 2020.

Freeman had an excellent rookie season last year and went from being the top hitter on the AZL Indians to being the top hitter in the Indians farm system this year. He’s fast and a smart baserunner, hits for a high average thanks to a line drive approach and doesn’t strike out much as he swings early and is great at making contact with any pitch. In the field, he has great glove work, although his arm is lacking. This could ultimately mean a switch to the other side of second base, although he is a good enough short stop that it is worth waiting it out to see if he can increase his arm strength as he ages. Freeman doesn’t turn 20 until next May and could still increase in size.

It took Jones 41 games to hit his first official professional home run and he hit just four total in his first two seasons, but he turned that warning track power into runs this year by hitting 19 out between Lake County and Lynchburg in addition to 18 doubles. His career line of .289/.410/.452  shows that he brings a bit of everything offensively.

Jones’ biggest drawback is defensively, however. He was drafted as a short stop, but barely played there in his rookie season and hasn’t played there at all since. There has been some discussion of moving him to first base, but Jones has yet to do so in an official game. He does have a strong arm, however, so corner outfield could be another option. No matter what position he plays ultimately, defense should be his primary concern in Akron next year.

Arm injuries continue to delay McKenzie’s career as he missed both the beginning and end of the 2018 season due to soreness, but he remains the franchise’s best hope for a future ace. He has maintained extremely consistent walk, hit and home run rates as he has jumped from level to level, although his strike out rate did fall a bit this year in Akron. This could have been due to his late start to the season as, once he got into his normal groove, he was dynamic. From July 3rd on he held a 2.09 ERA, .177 average against and struck out 65 in 64.2 IP.

The initial prognosis on the injury that cost him the play-offs this year was that it wasn’t very serious and, if he starts next season on schedule, he should start in Columbus and could be in Cleveland as early as needed. While I believe it would be a waste of his talent, if he were to be used in a multi-inning relief role in the majors next year it could be incredibly effective and help him avoid some of recurring injury issues.