Your Morning Dump… Where we’re glad that’s finally over 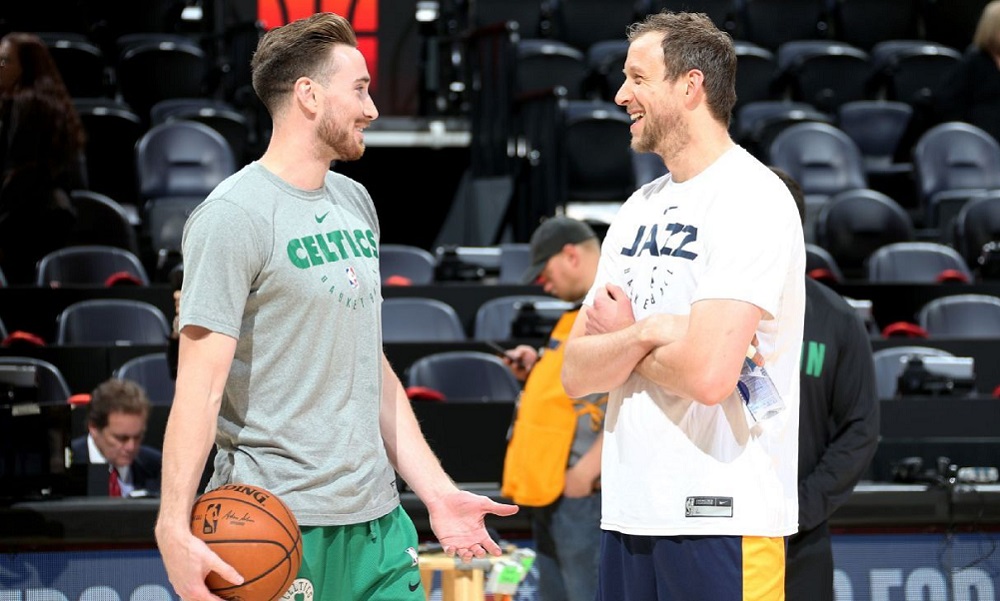 Your Morning Dump… Where we’re glad that’s finally over

Hayward had 13 points and a season-high seven assists, doing so while playing in both games of a back-to-back set, which is a first for him as he continues to get back to his old self after spending most of last season rehabbing from a left ankle injury suffered in the season-opener.

But there was little joy for Hayward on this night, one in which he was booed from the opening tip to his final missed shot by the Jazz fans who clearly haven’t quite gotten over Hayward’s decision to sign with the Celtics two summers ago instead of re-upping with the Jazz.

“They were on him tough,” said Morris who came off the Celtics bench to score 16 points. “I think he did well. That was expected so I know he went in there knowing something was coming. I think he handled it well. I just wish we could have got the win for him.”

“It is what it is. One of the things that we knew coming in was that there was going to be a lot of emotion on their side, fans and everything else,” Stevens said. “I thought that he did a lot of good things. Probably not the easiest position to be in but I thought he handled it well from a playing standpoint.”

NBC Sports Boston: Gordon Hayward on his return: ‘Wish we won … but it was good to see everybody’

Perhaps the most relevant, least bizarre question Hayward was asked in his post-game press conference: Was this a night he was looking forward to or dreading?

“Something in between,” Hayward said. “More than anything, I was looking forward to seeing (people). I spent seven years here so I built some great relationships and was looking forward to seeing some of those people. Maybe dreading a little bit about just the hoopla of the whole thing. With my injury and everything too, it’s been a whole year. We’re focused on our own thing and I know the Jazz are focused on their thing too.”

It’s finally over. For 16 months, we’ve been hearing from seemingly every Jazz fan, columnist, blogger and podcaster about how much they hate Gordon Hayward, and that they couldn’t wait for him to return to Utah so they could tell him to his face.

It should’ve happened last season, of course, but because it didn’t, their hatred has been festering. Hayward and Celtics fans have had to put up with it all this time, so the hope now is that maybe Jazz fans have gotten most of the anger out of their system.

The irony for Celtics Nation is that we’re hearing hate because we got Hayward, but we haven’t yet been able to enjoy having him here.

Hayward’s time in Boston has been nothing but a struggle, beginning with the day he announced his decision. Two fan bases were freaking out while he wavered about whether he’d stay in Utah or move to Massachusetts. Then came the injury, and the lengthy rehab, and the speculation about returning for the playoffs, and now the minutes restriction, and waiting for him to again look like the All-Star he once was.

Hayward has been improving, and last night he had a decent game in the unfriendly environment – 13 points and seven assists, although shooting just 3-9. He didn’t let on that the crowd got to him in any way, but he also didn’t make them pay for their hostility. Last night would’ve been a good time to drop 20-plus points and shut up the booing. It didn’t happen, maybe because Hayward just isn’t at that level yet. The struggle continues.

So, Jazz fans have had their moment, now I hope they get over Hayward leaving them. And I can say that because we Celtics fans can relate.

As we all know, in 2012, Ray Allen turned down more money from the Celtics to go play with the team that had just beaten Boston, and to be a teammate of the one guy we couldn’t stand to lose to. And then the next season, Ray saved LeBron’s ass by making one of the most dramatic, clutch shots in NBA Finals history. That shot horrified all Celtics fans, because it kept the Heat alive, and they went on to win Game 7. Without Ray Allen, LeBron’s Finals record would be a dismal 2-7.

Six years after Ray bolted, many Boston fans have still not forgiven him. Worse than that, the rift between Ray and his former Celtics teammates has not healed, and it mars the memory of the 2008 championship. Compared to that, Jazz fans haven’t lost much.

So I’m glad that Utah visit is over. And by the way, the Jazz come to Boston in one week, on Saturday, November 17. I trust Gordon will hear some cheers that night.

NBC Sports Boston: Here’s what happened in the Celtics’ 123-115 loss to the Jazz

Here are a few tweets that sum up the night.

The Utah franchise took the high road prior to the game.

The Celtics stood by their guy.

But Utah fans weren’t holding back.

"WE DON'T MISS YOU!" chants break out here in Salt Lake City.

Not even a little.

And in the end, Joe Ingles – Hayward’s best friend on the Jazz – had the last word.

And, finally… The City (Edition) Game

I would’ve put more gold in there, and I’d have made it more golden than yellow, but I’m on board with the Celtics’ City Edition uniforms. It’s as close as they’ve come to the St. Patrick’s Day jerseys of a few years ago, which were the (ahem) gold standard of alternate Boston uniforms.

Better still, these new duds are based on the warm-ups worn by the Celtics of the Havlicek and Bird eras, and you can’t do better than that.