Dogs of the Desert: AFL Week 5 in Review for Glendale 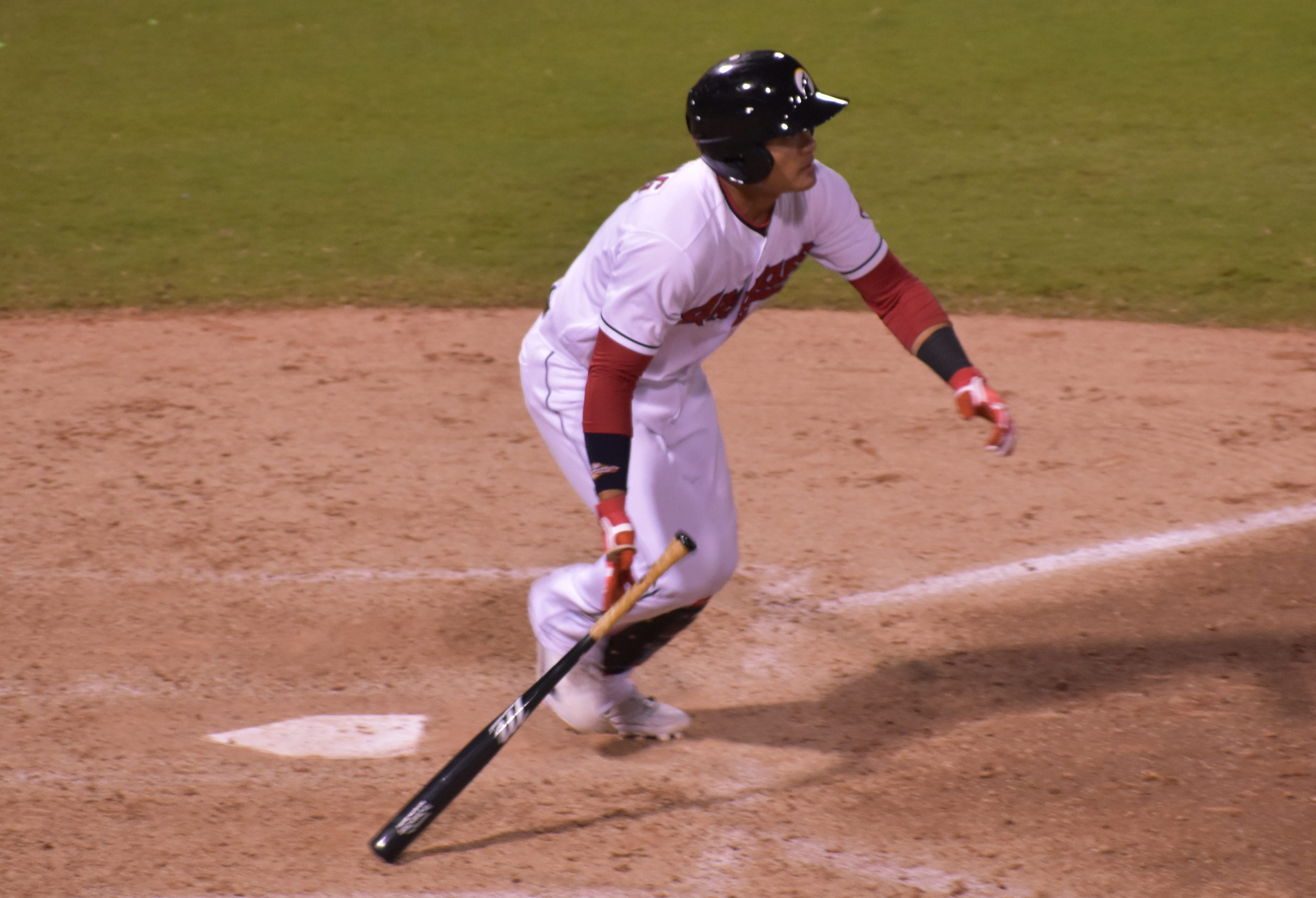 Dogs of the Desert: AFL Week 5 in Review for Glendale

Last week ended with a Fall Stars game that featured Keibert Ruiz (LAD), Luis Robert (CWS) and Estevan Florial (NYY) of the Desert Dogs in the starting line-up for the West with Jordan Sheffield (LAD), Yu Chang (CLE) and Ryan McKenna (BAL) on the bench.

The Glendale representatives were instrumental in the West team’s win as Chang came into the game in sixth as a second baseman and hit a two run triple to break the 3-3 tie and give the West the lead. The East would score three more in the 8th, but a two out Buddy Reed (COL) triple scored Vladimir Guerrero Jr. (TOR), then a Meibrys Viloria (KC) single would bring Reed home to walk off the game.

Alonso hits a home run for the East during the first inning of the 2018 Fall Stars game at Surprise Stadium. – Joseph Coblitz, BurningRiverBaseball

Back to the regular schedule on Monday, the Desert Dogs put the offensive into gear early with four runs in the second inning leading to nine total in a big win over Peoria, the top team in the whole Arizona Fall League. Thairo Estrada (NYY), Steve Wilkerson (BAL) and Robert each had two RBI while Chang had two hits including a double with a sacrifice fly on the side.

Chris Lee (BAL) pitched well as the starter, allowing two runs in five innings to keep his ERA at 2.60 for the season and Hobie Harris (NYY) was particularly effective during two shut out innings as he didn’t allow a baserunner and struck out three for a hold.

Things flipped entirely on Tuesday against Surprise, although the game started well for Glendale. Justin Garza had a shut out through three innings, but allowed three runs in the fourth before being pulled with two outs and two left on base. Tyler Erwin (BAL) allowed both of those runners to score (the first on a balk before his first pitch was thrown) as well as three of his own and the rout was underway.

Offensively, the Desert Dogs scored just once in the first inning, but both Robert and Connor Marabell (CLE) had two hits with Marabell and McKenna each hitting a double.

The losing slide continued for Glendale on Wednesday as Tanner Banks (CWS) was roughed up for five runs in 1.2 innings against the Solar Sox. Daz Cameron (DET) was particularly devastating with a two out, two run home run in the second that knocked Banks from the game and three hits overall.

The Desert Dogs scored runs in the second, fifth, sixth and seventh innings, but were never able to string together a group of hits and only Errol Robinson (LAD) and Steve Wilkerson were able to hit safely multiple times. Zach Thompson (CWS), Jordan Sheffield and Andrew Scrubb combined to throw the final four shut out innings, striking out five and allowing just two base runners to give the Dogs a chance at a comeback. This loss officially eliminated Glendale from a chance in the championship game.

After taking Thursday off, the Dogs were back in action on Friday against Scottsdale. Jordan Foley (NYY) had an excellent start, going 4 innings and allowing just one run. While he did allow four walks without a strike out, it was this strong start that would allow the Desert Dogs to hold on to the win.

Offensively, Glendale scored an uncharacteristic five runs against the top MiLB pitcher in the country, Forrest Whitley (HOU). While four of these runs were unearned, they came home thanks to an error by the pitcher, so they were at least a little earned. Luis Robert was particularly impressive as he reached on an infield single in his first at bat, stole second and scored on a fly out to center. He finished the game with three hits and two runs scored.

The bullpen would slowly allow the lead to dissipate until the game was tied in the eighth, but Estevan Florial knocked in Steve Wilkerson to give the Dogs the final lead.

Basabe stands at the plate for the Glendale Desert Dogs during the 2018 AFL season. – Joseph Coblitz, BurningRiverBaseball

Scottsdale would get their revenge on Saturday with five runs in the first three innings against Ben Holmes (LAD). The five relievers who followed each went exactly one scoreless inning, but the Dogs were unable to score more than one run in an inning and went down 5-3.

Robert went hitless in the final game of the week, breaking his league best 14 game hitting streak. Despite playing in only 15 games due to a mid-season injury, Robert is second on the team with 22 hits, first in runs scored (18) and steals (3) and is first in average, second in OBP and third in slugging (361/.409/.492).

Connor Marabell has returned well from his injury with 11 hits in his current six game streak including six doubles. He’s hitting .292/.307/.417 although he has only walked once all fall. This is incredible as he’s second on the team in at bats.

In roster news, Fall Star catcher Keibert Ruiz has been removed from the roster (11/7) making Li-Jen Chu (CLE) the starting catcher with Martin Cervenka (BAL) the only reserve.While Chu only has six hits this season, four have been doubles and he has been great behind the plate.

The Arizona Fall League will wrap up next week with games on Monday through Thursday and the championship game on Saturday in Scottsdale.