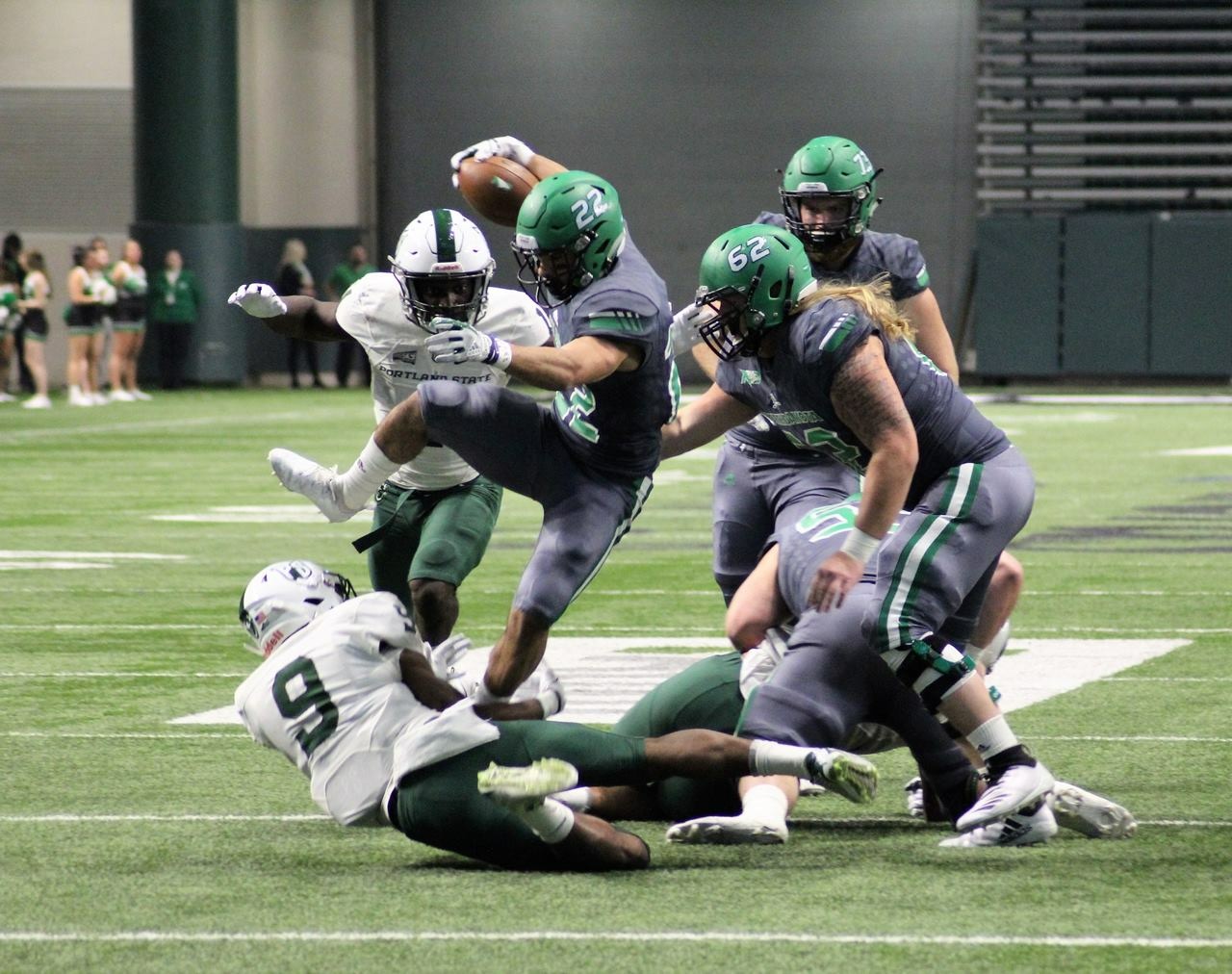 On Saturday, the University of North Dakota football team kept its FCS football playoff hopes alive with a hard-fought 17-10 win against Portland State.

With the win UND improves to 6-4. “If” UND can win next weekend against  Northern Arizona University they will put themselves in the mix for an at-large FCS bid. Then we’re rolling the dice. Who knows what can happen? To quote KFAN’s Paul Allen, “All we need is a chip and a chair.”

Against Portland State, redshirt junior Quarterback Nate Ketteringham was under pressure all game. The San Diego, CA, native was sacked four times. Ketteringham’s line against the Vikings: 8-16-1, for 100 yards, 13 attempts for 18 yards and one TD Rushing. Ketteringham’s longest completion was for 22 yards. The Vikings defense gave UND nothing.

As the season has played out, injuries have plagued the Fighting Hawks receiving corps. On Saturday, UND played without receivers Izzy Adeoti, Travis Toivonen and Garett Maag. Without these three receivers in the lineup UND struggled on offense. The Hawks were out-gained in total yards 300-222.

Viking head coach Bruce Barnum was impressed with his defense’s effort against the Hawks.

“Great job by our defense,” Barnum said. “It was a defensive struggle and we couldn’t get enough points. When we did get it rocking and rolling we had a couple of turnovers.

“We knew this was going to be a tight game. Giving them seven points, I feel bad because it was a valiant effort by our defense.”

Against the Vikings, Bennett was in the backfield all game causing havoc. The good news, Bennett is only a junior and UND will have him for another season. The sky is the limit with this guy.

The late Paul Bear Bryant once said, “Offense sells Tickets. Defense wins championships.” While some might think that sounds like a catchy sports cliché it applied to the Hawks on Saturday. While I am not suggesting that they’re going to win an FCS Championship, the defense rescued the offense when they needed a lift.

In the second half, the Hawks couldn’t get anything going on offense. It was three and out. The Vikings defensive line chased Ketteringham all over the Alerus Center turf. Then lightning struck, Lenny Nelson’s 58-yard pick six at the 14:49 mark of the fourth quarter swung the momentum in the Hawks favor.

“I saw Jaxson (Turner) batted the ball and I just took it from there and saw the green light,” Nelson said. “We were out there for a long time in the second half but no one gave up. You saw guys going to the sideline tired but no one giving up and every one out there fighting.”