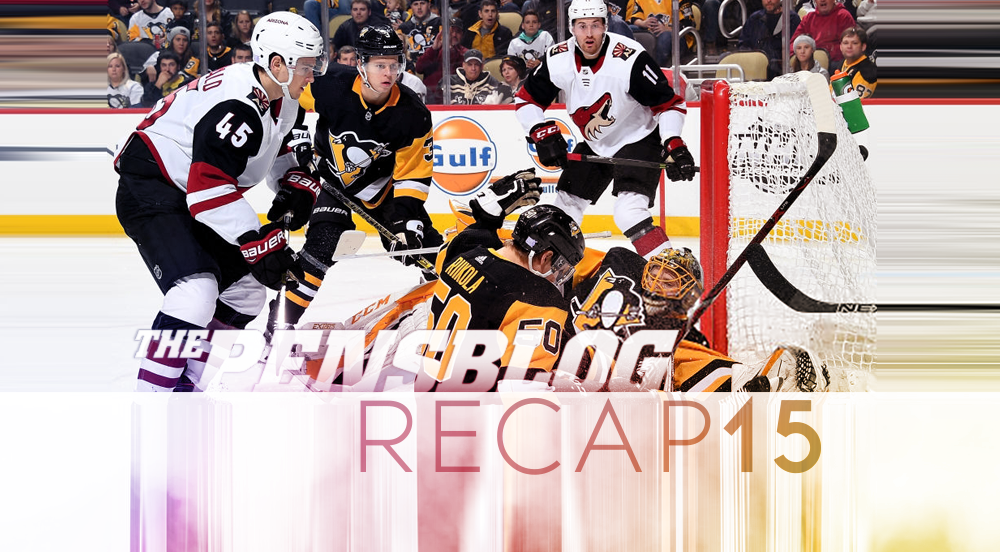 Turns out, all the Penguins needed to turn shit around was:

In fact, there’s a song written about this exact situation if memory serves:

They think they’re shitty but they ain’t shitty lets face it, shit basically
They just playing sick, they ain’t shit. They ain’t saying shit, spray ’em Sidney
P to the K, get in the way he’ll bring Phil! and them wit him
And turn this day into fucking mayhem you staying with me?
Don’t let me lose you, I’m not trying to confuse you
When I let loose with this Corsi and just shoot through your Kuem-poo
You get the message am I getting through to you?
You know whats coming you motherfuckers don’t even know do you?

Take some Sid and some Tang and you mix them up in a pot
Sprinkle a little criticism on top, and what the fuck do you got?
You got the realest and illest killers tied up in a knot
The Juggernauts of this puck shit like it or not
Its like a fight to the top just to see who died for the spot

You put your life in this, nothing like surviving the shot
Y’all know what time it is as soon as Sidney signs on this dot
Shit what you know about trade threats, ’cause they get a lot
GMJR was eighty seconds away from pulling the plug
Some cowards fucked with the wrong team they meant to hit ours
Better evacuate all children – nuclear shower
There’s nothing spookier, you’re now about to witness the power of fuckin Sidney

All that said, take nothing away from the Yotes.  They were on the wrong side of a 4-0 defeat, but they were actually far from bad and certainly far from being 4 goals worse than the Pens.

heat map and all stats herein via naturalstattrick.com, as usual

Once again, the Penguins were unable to keep their opponent from getting a chunk of shots from dangerous areas of the ice at 5v5.  Of the 32 shots Casey The Smith faced at 5v5 play, 6 came from the high danger area, while 12 came from medium danger areas (which you’ll see as the deep, dark blue spots above).  He also faced 4 rebound shots against at 5v5.

As a team, Arizona attempted 20 more shots than the Pens at 5v5 (64-44) and generated 10 more scoring chances than the home team (29-19), registering 10 high danger chances to the Pens 9.  Those shares don’t change much from a score and venue adjustment standpoint, either.

The difference, however, was the Pens efficiency and effectiveness in burying the puck.

The winning combination saw Sprong and Oleksiak sitting in the pressbox with The Smith got the nod in goal, while Malkin/Phil!, Sid/Bake, and Dumo/Letang were all split up to try to get something going further down the lineup.

After a decently even first period in which both goalies showed their mettle and proved to be impenetrable, it was the Pens getting on the board in the early stages of the 2nd period (with the eventual game winner) that got us off and running.

As we’ve seen over and over again this season, the Pens quick-strike ability is what gave them their stranglehold in the game despite not seeing a whole lot of the puck.

After winning a board battle in their own zone with a little help from Crosby getting it to Guentzel to exit, Bake-Sid-Phil! marched down on a 3v3 that turned into a 3v2.  Just look at the brilliance of Phil Kessel here.  He takes the pass from Guentzel, but doesn’t really have the legs to get going.  Instead, he slows it up and overlaps with Sid to take Dylan Strome, who was in a good defensive position, completely out of the play.  The quick little pass to Sid driving wide was all 87 needed to glide in around Ekman-Larsson and demolish Darcy Kuemper’s life from a sharp angle with a vintage Crosby backhander.

He’s doing this shit with regularity now and it’s making us consult our primary care physician for having erections lasting longer than 4 hours.

Right after the goal, DeSmith was called into action to preserve the lead, which he did on a majestic save on Vinnie Hinostroza , whomst is definitely not a member of some broke dick Italian mob.

Under two minutes later, the lead was doubled by the Crosby line.  This time, it was Crosby demolishing Jordan Oesterle’s life, putting him through the spin cycle as he danced on his edges in the corner.  Four Yotes players focused in on 87, allowing him to hit Maatta for a free shot attempt that eventually found its way to the stick of Bryan Rust in the faceoff circle.  No one wanted to pick him or Dom Simon up until it was too late with Rust finding Simon’s stick on the ice for the redirect.

As the period wore on, the Pens found themselves down a man for 4 minutes after Phil! went off for a double minor high sticking penalty.  The Pens were able to kill it off, limiting the Yotes to just 4 shots on goal across the 4 minutes of PP time.

Then, with about 15 seconds left on the clock, they put the desert dogs down with a late goal, again set up with Crosby on the ice.  He worked down low with Hornqvist and Simon before circling out and finding Voldemort at the point.  He-Who-Must-Not-Be-Named held the pass in, throwing it back down low to Simon below the goal line.  Hornqvist immediately pivoted from his Net Front Menace role to James Neal, finding that soft area in the slot to take the slick little feed and snip far bar.  What a fucking pass from Simon, though.

tfw you wake up and see you finally busted that slump pic.twitter.com/Q4opOL1coi

Once more, early in the 3rd, The Smith was called back into action with a big time save to preserve his shutout bid, robbing Grabner from the doorstep with a quick little kick save.

About 5 minutes later, the transition play of the Pens popped back up to punish the Yotes and officially seal the deal.

First, Dumo and Ruhwedel dealt with the puck in the corner with Strome and Hinostroza bearing down on them.  Ruhwedel threw it up the boards to Guentzel for him to hit Crosby in support with a touch pass.  Sid took it in flight, getting body position to head in on a 2v2 with Phil! while Dumo activated to join in late.  Both Coyotes d-men shadowed Crosby and Phil! and were condensed to the strong side of the ice, giving Crosby the passing lane to find Dumo on the far side to walk in, change the angle slightly and wire one just over Kuemper’s pad and under his blocker.  Bang.

Pens are back at in on Tuesday night as they head to Jersey before playing host to the Bolts on Thursday and heading to Ottawa at the weekend.  Do it.