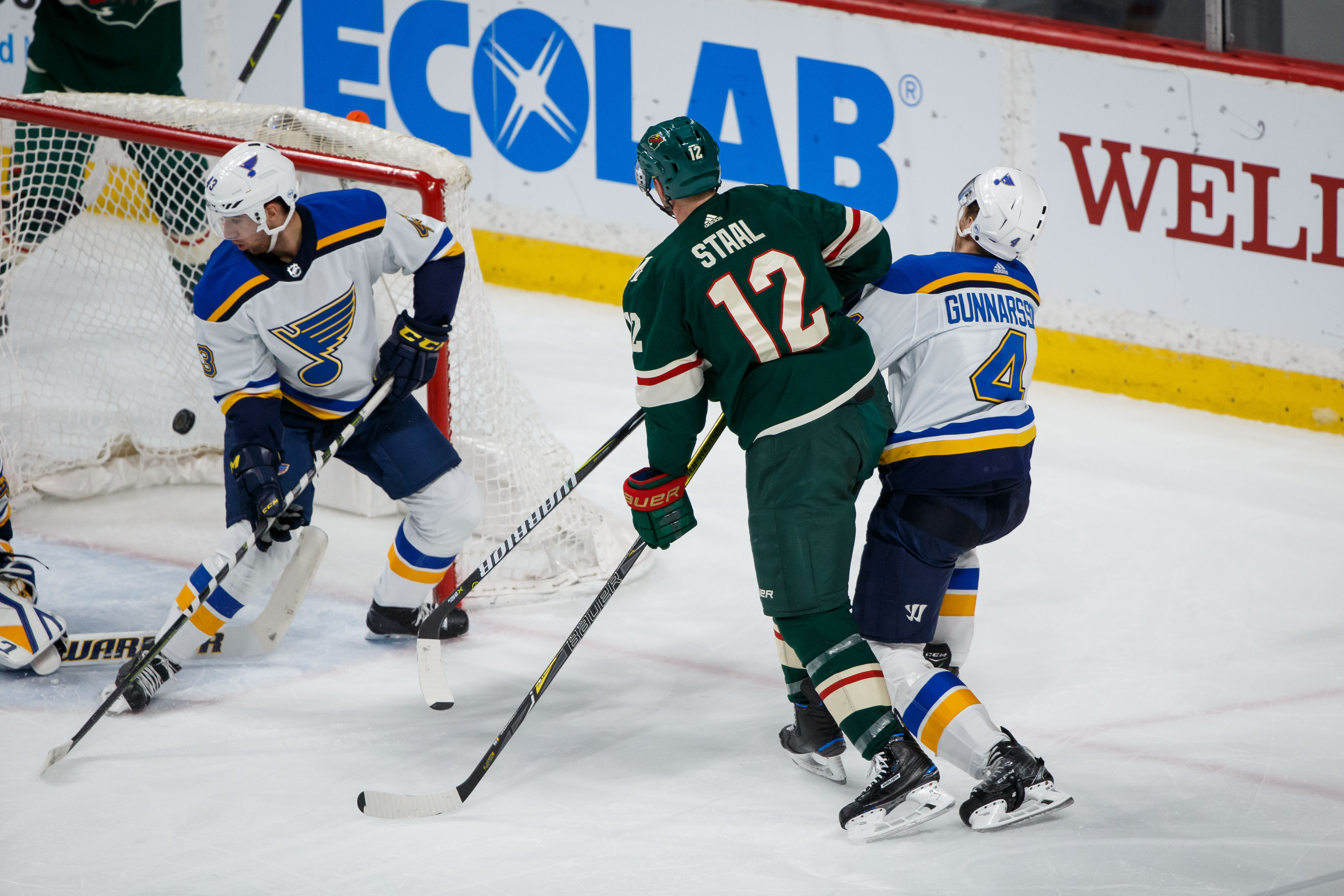 I use this saying with the teams that I coach a lot, its not about how your start but how you finish.  The Wild are at the end of their 7-game road swing as they make their way to St. Louis a 2nd time during this trip.  The Blues have started to win some games after the Wild embarrassed them last week.  Blues’ head coach Mike Yeo will no doubt be reminding his club of last week’s result as well as the importance of this divisional game.

Minnesota will be looking to finish the road trip with an exclamation point.  The Wild have been playing some of their best hockey of the season to this point, so they’re going to want to take a big opportunity to pull away farther from the Blues in the standings.  Can Minnesota earn another win on the road in St. Louis?

1st Period Thoughts:  A penalty to Jared Spurgeon less than a minute into the game forced the Wild to lean on Devan Dubnyk right away.  The Blues power play is tremendous, with so many quality options to utilize.  Dubnyk made a 3-4 glove saves to deny the Blues of any 2nd chance opportunities and building any sort of momentum from its sold out crowd.  He was seeing pucks well through traffic and very efficient in his post-to-post movement as he slid across to deny Ryan O’Reilly, the Blues top power play sniper this season on what looked to be a sure fire goal.  Minnesota would get the big early kill but the Blues appeared to have a bit more jump in its skates and they carried more of the play through the first half of the period.  The Wild tried to be patient and wait for opportunities to go on the attack.  A long pass by Ryan Suter found Jason Zucker at the end of a shift but with a step on the Blues’ defense and he’d unleash a shot that was gloved by Chad Johnson.  Minnesota was taking its chances to finish checks and working pucks deep as Jordan Greenway tried to bury a wrap around chance that that skittered through the crease.  Time and space became harder to come by at either end of the ice, so open lanes to the net were rare I think both clubs could sense the significance of the first goal as Vladimir Tarasenko got a shot off from the high slot that was deflected up and into the netting by Dubnyk.  At times the Wild were playing with fire as Mikko Koivu fed a weak puck to the middle of the ice in the Minnesota end that Robby Fabbri stepped into for a slap shot that was blocked aside by Dubnyk.  Minnesota had a few golden scoring chances of their own as Eric Staal set up Mikael Granlund from the slot for a quick shot that unfortunately he shot the puck right into Johnson who had slid across his crease and was out of position.  If he had directed the puck even a half foot towards the right post it would’ve been a goal.  With just under a minute left in the period, the Blues would light the lamp as Minnesota lost a battle for the puck along the boards which turned into a quick 2-on-1 between Ivan Barbashev and Oskar Sundqvist who took Barbashev’s pass and roofed a quick wrister.  1-0 Blues.  One error too many for the Wild, but overall they probably had to feel a little fortunate to only be trailing by one after how many quality chances Dubnyk faced that period.

2nd Period Thoughts:  The Wild would strike early in the 2nd on a really bizarre sequence as Zach Parise knocked down a floating pass from Jonas Brodin before spinning a pass over to Nino Niederreiter who got off a quick wrist shot that went off the post and then Parise batted it out of the air in in.  1-1 game and the Wild would strike less than a minute later as Joel Eriksson Ek sent a pass to Greenway who drove the net and his shot would be stopped by Johnson but Eriksson Ek buried the rebound.  2-1 Wild to a stunned Enterprise Center crowd.  The Wild kept applying pressure the next few minutes, getting shots and bodies to the net and forcing Johnson to make saves with plenty of Wild skaters nearby.  The Blues would knot the game back up around mid-way through the period as Alex Pietrangelo stepped into a slap shot that beat an unscreened Dubnyk cleanly.  2-2 game.  The Wild went back to work for the go-ahead goal as Jordan Greenway corralled a puck down low in the Blues’ zone before dishing a pass to Eriksson Ek for a quick shot that Johnson held onto.  The teams traded off shifts where they worked pucks along the wall and setting up shots with traffic out in front but Johnson and Dubnyk were both solid.

3rd Period Thoughts:  The Wild would draw their first power play of the game as Colton Parayko held up Greenway on a dump in to the Blues’ zone.  Yet on the man advantage it derailed pretty fast.  It started with Mikko Koivu getting tossed from the initial faceoff and that meant Nino Niederreiter had to take the draw, which he lost.  Alex Pietrangelo would fire a puck that struck Koivu that he took offense to and for the next 30 seconds the Wild captain as well as Parise spent it yelling at Pietrangelo for what they felt was an intentional act.  This resulted in a bunch of easy clears of the zone and the Wild failed to get set up in the Blues’ end at all.  Fortunately, not all of the Wild players were so weak in their focus; as the Staal-Granlund- Zucker line would give Minnesota the go-ahead goal as they kept hammering on the puck until it eventually reached Granlund in the slot and he fired a quick shot that beat Johnson.  3-2 Wild.  Perhaps hoping to distract the Wild with a little thuggery, David Perron would get Nick Seeler upset and the Wild defenseman put Perron in a headlock before tackling him to the ice.  Both players would go to the box for roughing.  There would be a little carry over later in the period as Perron would get tagged with a slashing call, when he hacked Seeler giving Minnesota a late power play.  Minnesota didn’t do all that much on the power play but they kept the puck in the St. Louis zone and forced them to waste valuable time playing defense instead of pushing for the equalizer.  After the power play came up empty, the Blues would throw the kitchen sink at Minnesota but the Wild selflessly blocked shots and were able to skate away with the 3-2 victory.

Devan Dubnyk was tremendous, making 29 saves in the victory.  He really kept the Wild in the game long enough to get their legs and offense going.  Dubnyk was especially good on the penalty kill, when he gloved shots and avoided giving up 2nd chance opportunities.  I thought Jared Spurgeon had a tremendous game.  The penalty kill kept the Blues off the scoreboard which is no small feat for a unit that converts at 30+% rate.

Offensively, the Wild were again rewarded for doing the little things and working pucks in close.  The first goal by Parise was pretty and highly improbable, but he was moving towards the net which gave him the chance to make the play that he did.  Eriksson Ek’s just a little over 30 seconds later was much the same way with Greenway crashing the net and Eriksson Ek burying the rebound.  Granlund seems to be the Wild’s top sniper so far, but along with Zucker and Staal they were our most dangerous line most shifts.

This was a great way to finish off 7-game road swing, with guys sacrificing their bodies by blocking shots down the stretch to get an important road win over the Blues (their 2nd one against St. Louis on this trip alone).  They won’t get a long rest as they return to St. Paul to face the defending Stanley Cup champion Washington Capitals on Tuesday.  But overall the road trip seemed to bring out (mostly) the best in this club and they have some good momentum returning home.

~ Crease And Assist: A Legally Compliant Minnesota Hockey Blog would like to thank and honor those men and women who have served our country, whether in times of peace or war.  We are eternally grateful for their service to our country.  Thank you to all who have served, past and present.

Iowa did its best to avenge a Thursday school-day game loss to the Condors.  The Wild threatened to score a few times early but Shane Sterrett was sharp, keeping Iowa at bey with some fine saves.  A turnover in the offensive zone would turn into a goal for Bakersfield as Caleb Jones stepped into a slap shot that blew by Andrew Hammond.  Iowa would tie the game up late in the period when Dmitry Sokolov skated deep into the offensive zone and he fired a sharp angle shot that somehow found the back of the net.  1-1 after 1 period of play.  Iowa would have plenty of good chances in the 2nd, but Sterrett was again rock solid.  Turnovers by Iowa also proved costly as the Condors struck twice on goals from William Lagesson and Brad Malone‘s backbreaking shorthanded tally to give Bakersfield a 3-1 lead going into the 3rd.  In the 3rd, Iowa would try to dig deep to make a game of it as Dmitry Sokolov let go a backhander that got behind Sterrett to cut the Condors’ lead to one, 3-2.  Bakersfield would score off another costly turnover in the neutral zone as Tyler Benson lit the lamp to make it 4-2.  Iowa would answer right back 30 seconds later as Sam Anas scored from in close to make it a 1-goal game but that was as close as it was going to get.  Iowa struggled to generate chances down the final few minutes and they’d fall 4-3.  Hammond had 29 saves in the loss.

D – Nick Boka (Michigan, Big 10) ~ the senior defenseman had a helper on the game winning goal as Michigan defeated Notre Dame 2-1 on Friday night.  Boka has 3 assists, 2 PIM’s and is a -2 in 8 games.

C – Connor Dewar (Everett, WHL) ~ the Silvertips’ captain had an assist and 4 shots on goal in Everett’s 6-1 win over Kamloops.  Dewar then followed up that effort with another goal on 6 shots in the Silvertips’ 4-1 win over Seattle on Saturday night.  The Pas, Manitoba-native has 13 goals, 23 points, 23 PIM’s and is an ‘even’ in 15 games.

RW – Nick Swaney (Minnesota-Duluth, NCHC) ~ the former Lakeville South star had two goals on 5 shots in the Bulldogs’ 5-1 win over Colorado College on Saturday.  Swaney has 3 goals, 7 points, and is a +3 in 10 games.