Your Morning Dump... Where Jayson Tatum has got the attention of opposing defenses 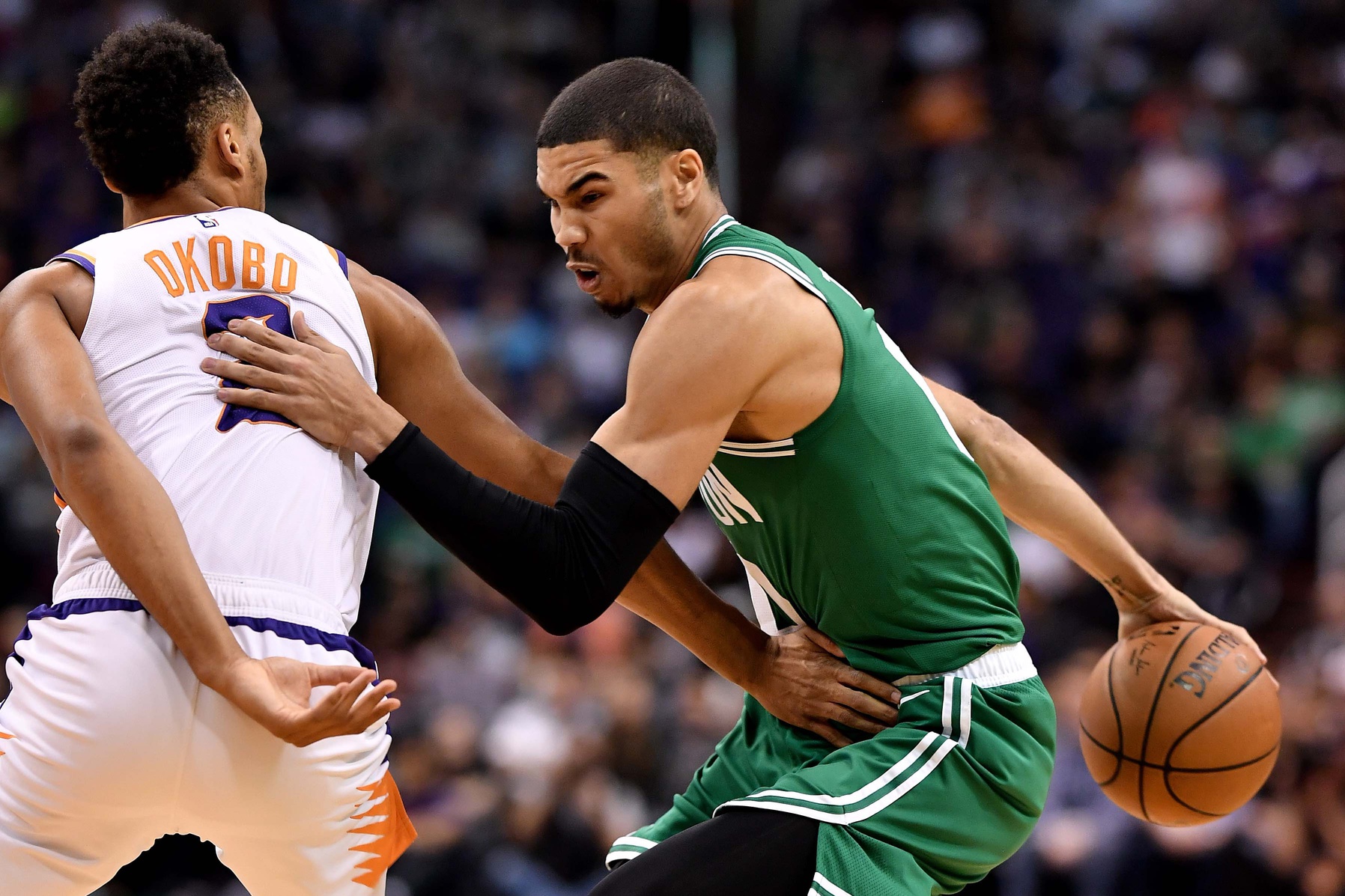 Your Morning Dump... Where Jayson Tatum has got the attention of opposing defenses

“They’re not giving me as much space this year,” the Celtics forward said this week.

“Being physical, not really helping off of me much. Blitzing the ball screens sometimes, fronting me, just playing defense,” Tatum said of the beginning of his second-year experience. “In everything you do, you have to be a lot quicker. Cuts have to be harder. Stuff like that.”

The are plenty more quotes from Tatum about how he’s being guarded so be sure to read all of Mark Murphy’s piece in the Herald.

I don’t doubt that teams are more aware of how to guard Jayson Tatum. Last year he was a bit of a revelation, but he wasn’t surprising many people down the stretch. By the end of the season, with the Celtics down Gordon Hayward and Kyrie Irving, it was pretty obvious the defensive game plan against Boston had to include stopping Tatum.

I’m sure the full year has given coaches more data on how to guard Tatum and how to force him into more difficult shots, but for what it’s worth Brad Stevens isn’t seeing what Jayson is talking about.

“I don’t think it’s any tighter than last year,” said the Celtics coach. “Somebody on the other team at the four is going to guard one of our wings – usually it’s not Jayson, usually they put a wing on him…”

It’s hard to say what’s really happening without pouring over all the video from last season and this one. Statistically, though, there is an interesting difference in the shots he’s getting.

It’s hard to say exactly what’s happening here. It’s very easy to conclude that the significant drop in wide-open shots shows that defenders aren’t just leaving him like they did last year. He is more tightly defended, statistically, but these numbers aren’t exactly complete. They don’t say how he was defended on passes or attempts to get open. You can infer that because he’s being more tightly guarded on shots, it stands to reason he’s being more tightly guarded all the time, but there’s nothing statistically that shows that.

Maybe this is why Tatum has settled for so many isolation shots. I broke down his shot profile on Boston.com

Last season Tatum took 6.7 two-point shots per game, hitting 54.6 percent of them. This season he’s 8.6 per game and hitting 41.1 percent. That increase is entirely pull-up jumpers, which he’s taking two more of per game. He’s also using more dribbles this season. According to NBA.com’s second-spectrum tracking stats, he’s using 3-6 dribbles for 2.7 two-point field goals per game, up from 1.9 last year. In fact, all of his shots from two use more dribbles.

One final stat: His assisted versus un-assisted shots this season are evenly split, but last season he had twice as many assisted field goals.

The frustrating isolation play might not just be a bout of Kobe-itis. He could just be reacting to the tighter defense and settling for shots he feels comfortable with rather than fighting through it. Defenses are also geared towards allowing those long-twos, which also plays into Tatum’s shot selection.

Twelve games is too small a sample size to make any long-term determinations. 28.6% of his field goal attempts this year have come from within five feet of the rim. Last year, 38% of his shots came from in that area. This year, though, he’s finishing a little better (61.4% vs. 57.4%) so if he can start to get closer to last year’s attempts with this year’s finishing, we’ll start to see a better overall shot profile from him.

I’m going to keep saying it until these guys start doing it… if they trust the ball movement and their teammates, they will get the ball back and get good scoring opportunities. Ball movement softens defenses and creates lanes to attack. Tatum will shake this tight defense and get into better areas to score.

The isolation stuff will always be there. If the ball moves and Tatum gets going, then he’ll have the rhythm and confidence to shake a guy and score 1-on-1. But it has to be in that order. Going isolation first is going to result in more of what we’ve seen, and that’s just not good enough.

Daniel Theis, who has missed the last five games with a plantar fascia injury to his left foot, tells NBC Sports Boston he’s targeting a return to the Celtics lineup as early as next week’s home game against the Chicago Bulls on Nov. 14.

Theis said he did some running on the treadmill today as well as some light shooting.

“My target is to be ready to go for the next home game,” Theis said.

This is a quicker return than I anticipated when they first announced his was out indefinitely with the tear in the plantar fascia. However, the Celtics were always optimistic about this injury, so I didn’t expect him to be out for too long either.

The biggest impact of his return will be the ability to send Robert Williams to the Maine Red Claws for some extended run rather than sitting on the bench as an emergency body in case of foul trouble or injury. Getting Williams out there running and learning will be great for his development, so getting Theis back doesn’t just add a very helpful body, it lets the rookie play some basketball.

The Houston Rockets and Carmelo Anthony are discussing his role with the team and how the franchise and the 10-time All-Star forward still might be able to proceed together for the rest of the season, league sources told ESPN.

Talks are ongoing, the sources said.

Anthony missed the Rockets’ 96-89 loss at San Antonio on Saturday night because of an illness.

After the game, coach Mike D’Antoni referred all questions about Anthony to general manager Daryl Morey.

“Yeah, that’s … I’m sure you can address that with Daryl. I’m trying to win a game,” D’Antoni said, adding: “You need to talk to Daryl. On that one, I have no answer for you right now.”

Melo is going out the same way Allen Iverson did, brashly refusing to accept his declining skills and evolving his game to prolong his career and maybe getting a chance at a ring.

This is his choice, and if he is at peace with it, then so be it. Players aren’t required to evolve their games. If a guy wants to go out the way he’s always played the game, then so be it. He has to be ready to accept the consequences, though.

For Anthony, this might mean the end of his NBA career, because he’s clearly not going to accept a smaller role somewhere. If he can’t make coming off the bench for the Houston Rockets work, then who would be desperate enough to add him to their roster? (the answer here is the Washington Wizards).

Daryl Morey may have made his biggest mistake as a GM by putting his faith in Carmelo Anthony. He let key pieces to last year’s success go and bet on Melo to soften his edges enough to fit that square peg into a round hole. The Rockets might get lucky with a bit of addition by subtraction should they part ways, but the holes in the Rockets roster remain unfilled.

There’s time for the Rockets to recover and become a challenger to the Warriors again, but Houston has learned a lesson that’s broadcasting loudly to the rest of the NBA: You can’t get anywhere with Carmelo Anthony on your roster anymore.

Globe: There’s good reason why the Celtics are scouting the nation’s best college players  |  How the Jimmy Butler trade to the 76ers affects the Celtics and the East

NBCSN Boston: Philly adds some much-needed toughness with Butler trade  |  Once scary-good on the road, Celtics off to a nightmarish start away from home

BSJ: NBA Notebook: Breaking down the Jimmy Butler trade through a Celtics lens