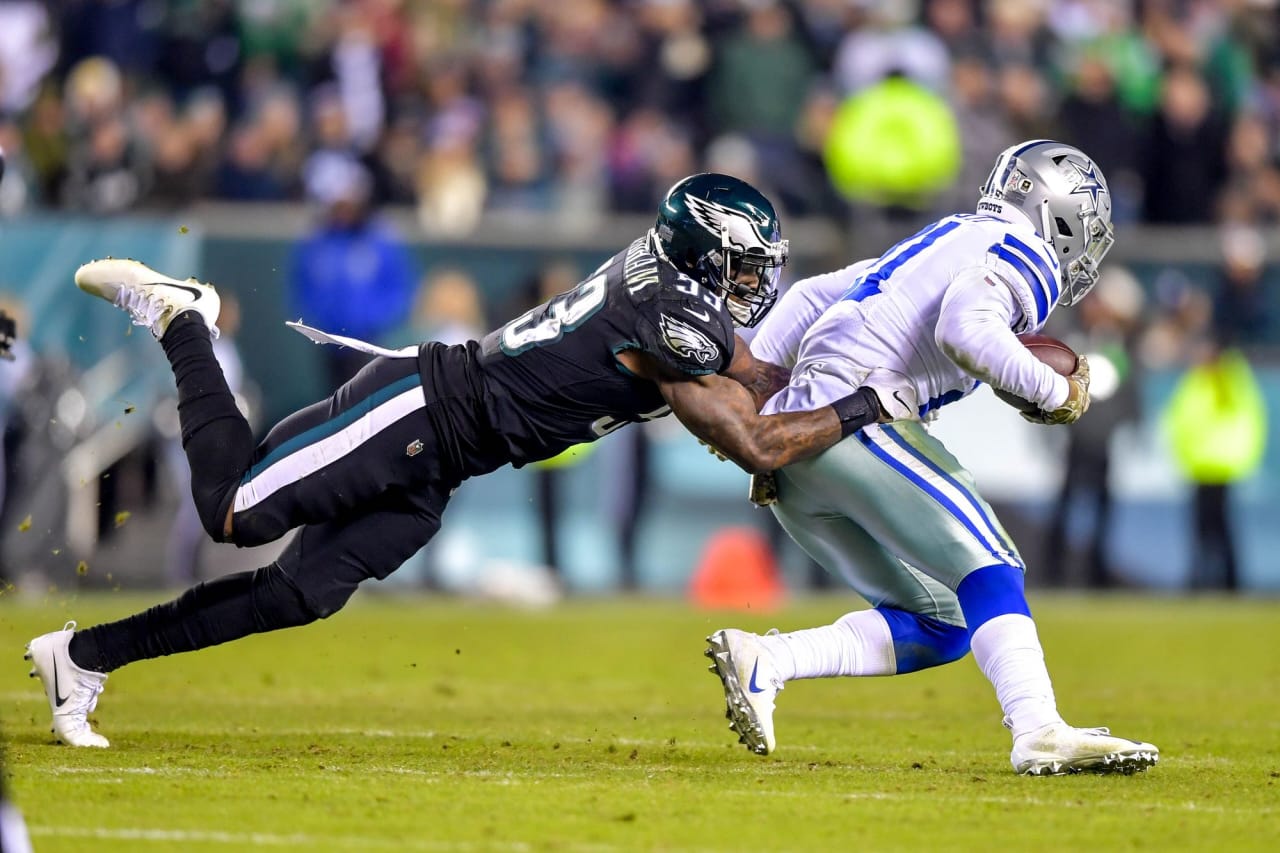 Nerve-wracking game to watch if you’re an Eagles fan…so many missed tackles (though I get Zeke Elliott is a load to bring down) and so many missed connections on offense (receivers sitting down on the route, Wentz thinking they will keep going, that sort of thing). Trips to the red zone that wound up netting only a field goal, or nothing at all…a vulnerable zone defense that gave Dak Prescott too many open targets which even Dak couldn’t miss…

Still there was a feeling with the game tied at 20 with 6:56 to go that the home team would find a way to clamp down on the Dallas offense and take charge of the outcome. Instead, the Eagles defense broke down badly and Dallas took a 27-20 lead with 3:30 left.

We get the ball on the ensuing kickoff and drive sporadically to the Dallas 30 at the 2-minute warning. But we end up turning the ball over on downs on a 4th and 7 with 1:09 left where Jeff Heath makes a super coverage play on Ertz and we only get 6 of the 7 yards we need. This was right after Vander Esch made a great play to blow up a 3rd-down screen to Smallwood—a not-so-smart playcall in my humble estimation.

Fortunately we have all our timeouts left and we get a stop. We get the ball back with 49 seconds left after a Dallas punt to Golden Tate which you were hoping would net something big but didn’t. Wentz worked the sidelines to get down to the Cowboys’ 30 with nine seconds left. He hits Ertz over the middle but not deep enough…time expires. Game.

We underestimated Dallas’ linebackers sans Sean Lee and overestimated our own zone defense. We called a clunky and way too conservative game on offense. I hate to say it, but coach Pederson and coach Schwartz got chumped by a Dallas game plan that was shrewd and brainy…compared to ours, anyway.

They included: A coach’s job security called into question; a quarterback struggling to make any kind of plays; an offensive coordinator perhaps on his last chance and a defense left wobbly after its last game. All in all it added up to a season on the line.

Dallas left Philly with Dak Prescott throwing two touchdown passes in a road game for the first time this season.

They left with Ezekiel Elliott going for more than 150 yards on the ground against the NFL’s second-best run defense and scoring twice.

They left with Scott Linehan managing the offense as well as it had been managed all year.

They left with the defense doing just enough with Leighton Vander Esch book-ending a first-quarter interception with a huge fourth-quarter tackle that preceded Jeff Heath’s fourth-down stop of Zach Ertz with 1:09 to play.

At times early in the game, Prescott was bad, like taking a 13-yard sack in the second quarter. He held onto the ball too long, leading to sacks.

At times Prescott was good, like at the end of the first half when he connected on all five passes for 79 yards and sneaked in from a yard out with 19 seconds left for the Cowboys’ first touchdown.

And then with 7:27 to play in a tied game, Prescott was once again very good with a 17-yard completion to rookie tight end Dalton Schultz; a floater to Amari Cooper for 24 yards; and a critical third-and-8 completion to Allen Hurns for 23 yards. Or was it that our zone coverage was just that bad?

From there the Cowboys rode Elliott, giving him the ball three straight times for his second touchdown of the game.

Prescott completed 26 of 36 passes for 270 yards and a touchdown pass. Elliott finished with 151 yards on 19 carries and the touchdown run and TD reception.

The defending Super Bowl champion Eagles fell to 4-5 with their third straight loss at home while the Cowboys improved to 4-5.

The math was pretty simple entering this one: According to ESPN FPI, the Eagles’ chances of making the playoffs would jump from 60 to 70 percent with a win. A loss would plummet their odds to 35 percent. They were the two highest potential swings in the NFL for the week.

The Eagles were 0-for-4 on third down in the first half and managed 132 total yards while falling behind 13-3. Boos rained down from the stands as the team jogged into the tunnel, fresh off yielding a late touchdown.

The defense, fueled by a pair of Michael Bennett sacks, kept them in it, but bend went to break eventually, as Ezekiel Elliott galloped for 151 yards on 19 carries (7.9 average) with a touchdown, hurdling defenders along the way.

Carson Wentz and Zach Ertz heated up in the second half, connecting for a pair of touchdowns, but the early mistakes and ineffectiveness proved too much to overcome.

The Eagles started slow, as they have often this season. They scored 20 points, just a couple ticks below their average. The defense didn’t generate any takeaways and broke down at inopportune times — a theme throughout the first half.