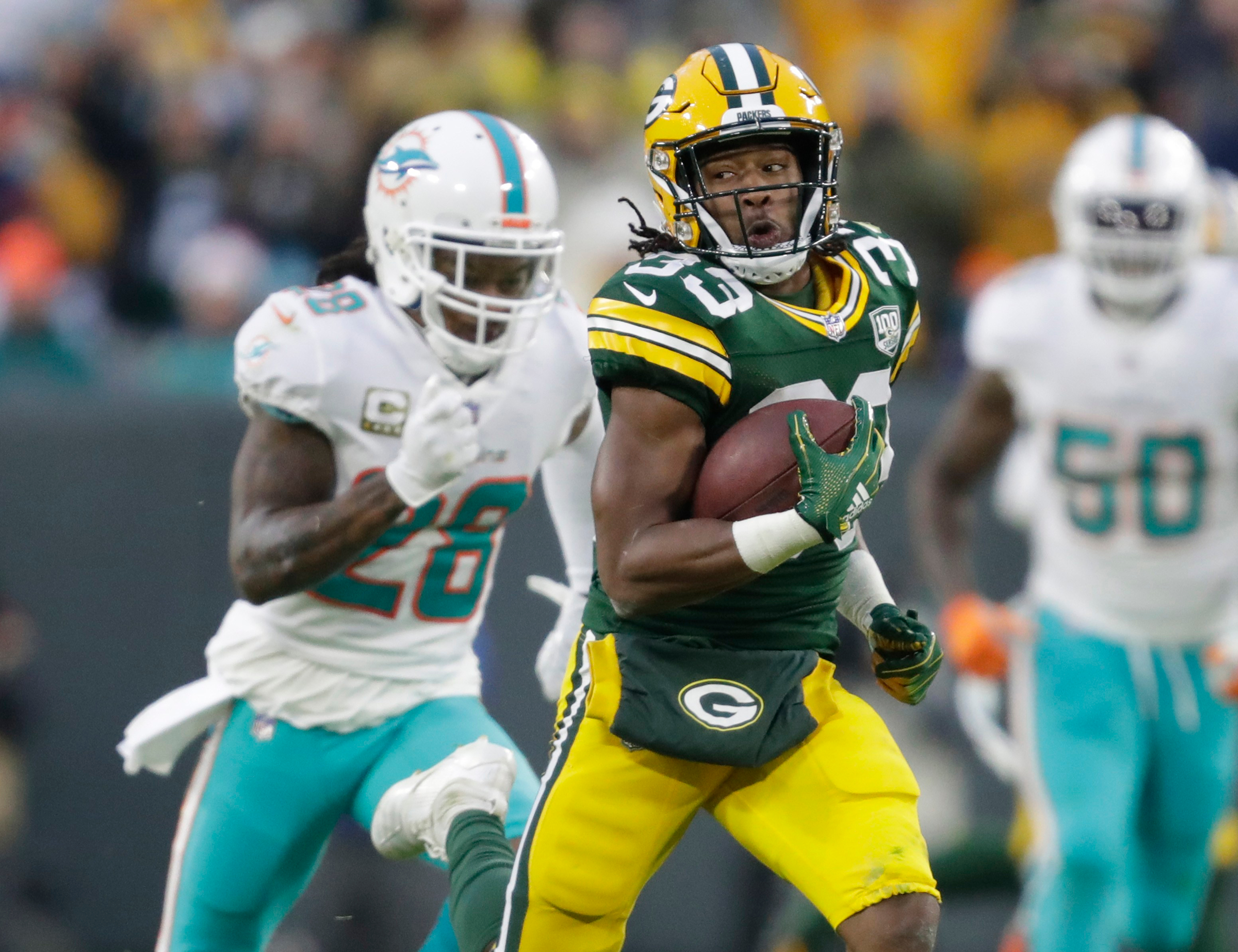 The Green Bay Packers ended their two-game losing streak with a solid 31-12 victory over the Miami Dolphins in Week 10. The win evened the Packers record at 4-4-1.

Here is a look at seven key takeaways from the Pack’s much-needed win that gives the team hope as they begin another challenging two-game road trip.

Fans and media critics have been clamoring for the Packers to give Aaron Jones the football more. Today, Mike McCarthy finally listened, and the results were outstanding.

Jones finished the game with 145 yards rushing on just 15 carries including a 67-yard dash. He scored two rushing touchdowns and caught three passes for 27 more yards.

Jones is a dynamic runner who finds a way to gain extra yards that most RBs will not pick up on identical plays. He needs to continue to be a major piece of the Green Bay attack in future weeks for the team to maintain balance on offense.

2. Give the Offensive Line Credit

The Packers offensive line did a very good job overall today, especially when blocking for the run. While Jones ran the ball very well, he had some large holes to run through and was often a few yards downfield before a Dolphins defender was able to get a hand on him.

Rodgers was sacked only twice and while he did have to scramble at times, he usually had an escape lane and turned a few pressures into productive scrambles.

The offensive line rarely gets noticed unless they make big mistakes, but today they did a good job throughout the game and helped this team win.

Special teams have been a problem all season for the Packers and the Dolphins game was no exception. The Packers had a blocked punt, a fumbled punt return by Tramon Williams, a fumbled kick return by offensive lineman Lucas Patrick (who shouldn’t be picking up the ball at all) and an offsides call on a field goal attempt by Josh Jackson that did not end up costing the Packers anything since the penalty was declined.

As usual, the Packers return game was also hampered by penalties when they did try to run make kick and punt returns.

On the plus side, Raven Greene picked up a first down on a fake punt and the kick return coverage was consistently good today, holding Miami to an average of fewer than 20-yards per kick return on six chances.

Still, overall, special teams is a big concern for the Packers and they need to clean up this area of their game or good teams will take advantage.

4. The Pass Rush Came to Life When the Team Had a Lead

The Packers finished the game with six sacks from six different defenders including Greene, Montravius Adams and Dean Lowry who each registered their first sacks of the season.

Five of the Green Bay sacks came in the second half and all five came after the Packers had extended their lead to 28-12. Mike Pettine knew that Miami had to pass on almost every down and he was able to devise blitz packages to exert consistent pressure on Brock Osweiler for the remainder of the game.

Most of the sacks were still coverage sacks, but the Packers were able to get consistent pressure when they needed to and that helped choke off any chance of a late Miami rally.

5. The Defense Came Up Big When It Had To

The Packers defense gave up some yards but any time the Dolphins got even close to the red zone, Green Bay’s defenders kept the Dolphins from reaching the end zone. At one point, each team had four scores, but the Packers had four touchdown and the Dolphins had four field goals.

Miami had two opportunities with a short field but were never able to cash in and find paydirt. The Dolphins started one drive at the Green Bay 45 after the Packers were stopped on fourth down, but the Packers defense stopped them at the Packers 29.

After the blocked punt, Miami had the ball first-and-10 at the Green Bay 28 but failed to pick up a first down and again settled for three points.

When you don’t allow a touchdown and you have Aaron Rodgers as your quarterback, you’re going to win a lot of football games.

6. Injuries Are Taking a Toll on the Defense

Backups came in and played well for the Pack including Raven Greene, Tony Brown and Kyler Fackrell, but Russell Wilson will provide the defense with a much bigger challenge than Osweiler did.

With a short week coming up, the Packers will not much time to get these injured players healthy in time to face Seattle on Thursday night.

7. Aaron Rodgers Was Very Efficient and Spread the Ball Around Well

Rodgers was efficient throughout and didn’t have to be spectacular in this game. With Jones running the ball so well, the Packers didn’t need to rely on Rodgers as exclusively to keep the chains moving all the time.

The Packers QB threw to seven different receivers in this game including three different tight ends (Jimmy Graham, Lance Kendricks and Marcedes Lewis) who had one catch each.

With Randall Cobb injured, Rodgers focused on Marquez Valdes-Scantling and Davante Adams who each had seven targets. MVS made six catches, while Adams made four receptions and grabbed both touchdown passes.

Aaron Jones was also a bigger part of the passing game with three catches in five targets. This shows that McCarthy is trying to find some new ways to get Jones touches even if he isn’t going to run the ball 20 times per game.