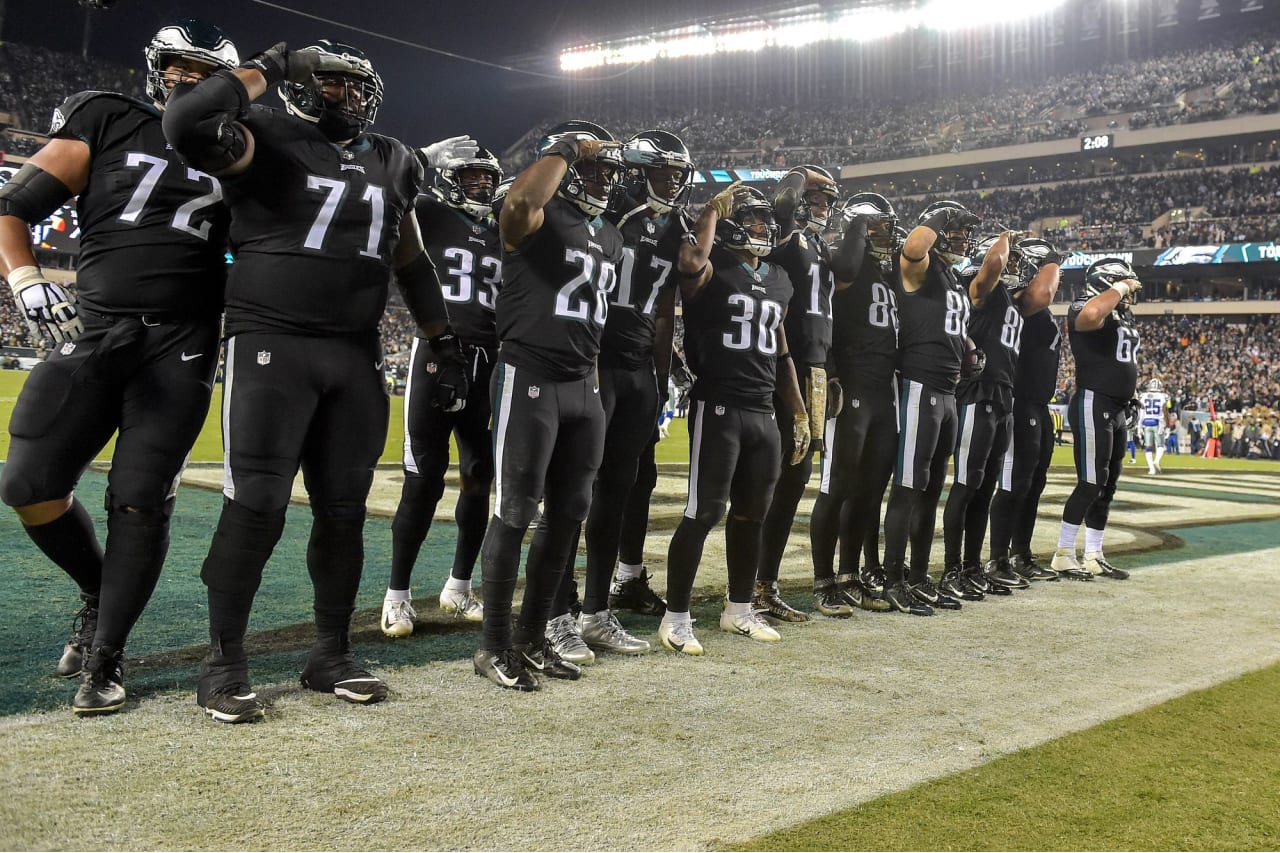 The venting over the Eagles’ lackluster performance against the Cowboys at home? It was harsh, it was crestfallen, it was every regret we felt together as fans. It was necessary. You gotta let out the anger before you let the sunshine in.

Now calmer assessment is the order of the day. We’ve got to pull ourselves together as real fans.

Real Eagles fans know there’s a human element in every game which transcends winning or losing. It’s about the inevitability of things not going the way you planned. Sometimes bad things happen to great athletes—and trust me, no matter how badly things turn out in any given contest, we are privileged as fans to witness some of the best football talent ever assembled for a viewing audience. I mean, not just the Eagles, but the entire league…

For example, I watched the New York Giants behind Eli Manning pull out a late drive win over the 49ers on MNF. You may not “like” either team, but the fact that everyone out there was playing to win—and really cared about their craft—was just the antidote I needed for the disappointment of an Eagles loss to Dallas.

You see, what I experienced was witnessing the upside of a down season. Guys on both the Giants and the 49ers were really into executing their assignments and trying to make a difference in the game. Extra effort was all over the place. It was more about pride in your profession than about resignation to your current W-L record.

Even “bad teams” can have excellent nights when coaches call good stuff and players respond accordingly. After all, we are talking about the best football talent in the world. The primary window is narrow for an excellent NFL football career, maybe 5 years for a player and 10 years for a coach, so it’s gratifying to observe even down-and-out teams giving it their all.

Now after hearing that sermon, do you feel just a little better about the Eagles’ treading water at 4-5 after a tough beating by the ‘Boys?

Look at the bright side— all of our weaknesses and depletions as a team are now exposed for the world to see, which means we now know exactly what we have to either correct, or exchange for different strategy.

Maybe that’s the real key to beating the so-called “Super Bowl Hangover”… At some point you get addicted to the magic of the previous season, where big plays—I mean, BIG PLAYS—seemed to materialize out of thin air when you needed them most. That was a big part of the homer appeal last season for all Eagles fans. Not only did we expect something BIG to happen at all the right times in last year’s magical 16-3 run, apparently our coaches and current roster of players expected the trend to continue too, as long as we kept DOING THE SAME THINGS THAT WORKED BEFORE.

But the “same things” stop working for EVERY team, not just the incumbent Super Bowl winner. For instance, Frank Reich is doing amazing things now with the Indianapolis Colts offense because of the new way he is using both his tight ends on the field at the same time. In other words, he departed from the “same things” the Colts used to do on offense, which not that long ago were working fine—until they didn’t.

An example of a 3rd-down-and-short play that worked often for the Eagles last season failed miserably late in the game against the Cowboys. I erroneously reported this play as involving Wendell Smallwood, but it actually featured Corey Clement.

On 3rd-and-2 with the Eagles trailing 27-20 with two minutes left, Pederson called a screen pass behind the line of scrimmage to Corey Clement that lost five yards and set the Eagles up for a 4th-and-7 with the game on the line.

Once again the Eagles went horizontally, not vertically. It worked a lot in 2017, but this play had shades of the 2016 loss to the Cowboys, when Pederson had Eagles quarterback Carson Wentz go to Darren Sproles on a swing pass behind the line of scrimmage on a 3rd-and-8 which resulted in a six-yard loss.

That’s the part of DOING THE SAME THING mentality which I think gummed up the works. Doug underestimated that the Cowboys were prepared for the play, and discounted the fact that they had looked at situational film on Doug from not just this season but from as far back as 2016.

You learn from moments like these, or you don’t. We have an opportunity at 4-5 to make a CHANGE in the way we call a game and find big plays.

To be fair to Doug, game tape shows there was a chance of getting that play to succeed. This goes to GK BRIZER’s comment that the loss to Dallas was probably weighted 80% players’ execution, 20% coaches’ dumbkoff scheme decisions.

Leighton Vander Esch made the play of the game in bringing down Clement for a five-yard loss, but the play works if Jason Kelce or Brandon Brooks put a better block on Vander Esch. If they get to Vander Esch and take him out of Clement’s trajectory, the Eagles have a first down and keep the drive going.

But that also begs the question why Vander Esch had a huge jump on the play. His coordinator told him it was coming.

“They did a great job of scheming against us,” Clement said. “The linebackers did a great job of reading the play and giving us minimal time to make a reaction. If I could go back to that, the big difference would be if I could switch the ball I could get my stiff arm out there and reach out for two more yards. I put that on me. Anybody should be able to get two yards.

“I would put the ball in the other hand. There’s a lot that goes into a play. It’s not one single thing. If I could run it back, I wish I could.”

That sums up why and how the true Eagles fan can take heart. There are still 7 regular season games in which to “run it back”. We understand that our guys are human beings with the capacity to become if nothing else a whole lot less predictable. As illogical as it may sound, considering you put a Lombardi trophy in the building less than nine months ago, you must CHANGE the way you do some things. It’s not only okay to change, but any realistic shot at redeeming this current season demands it.