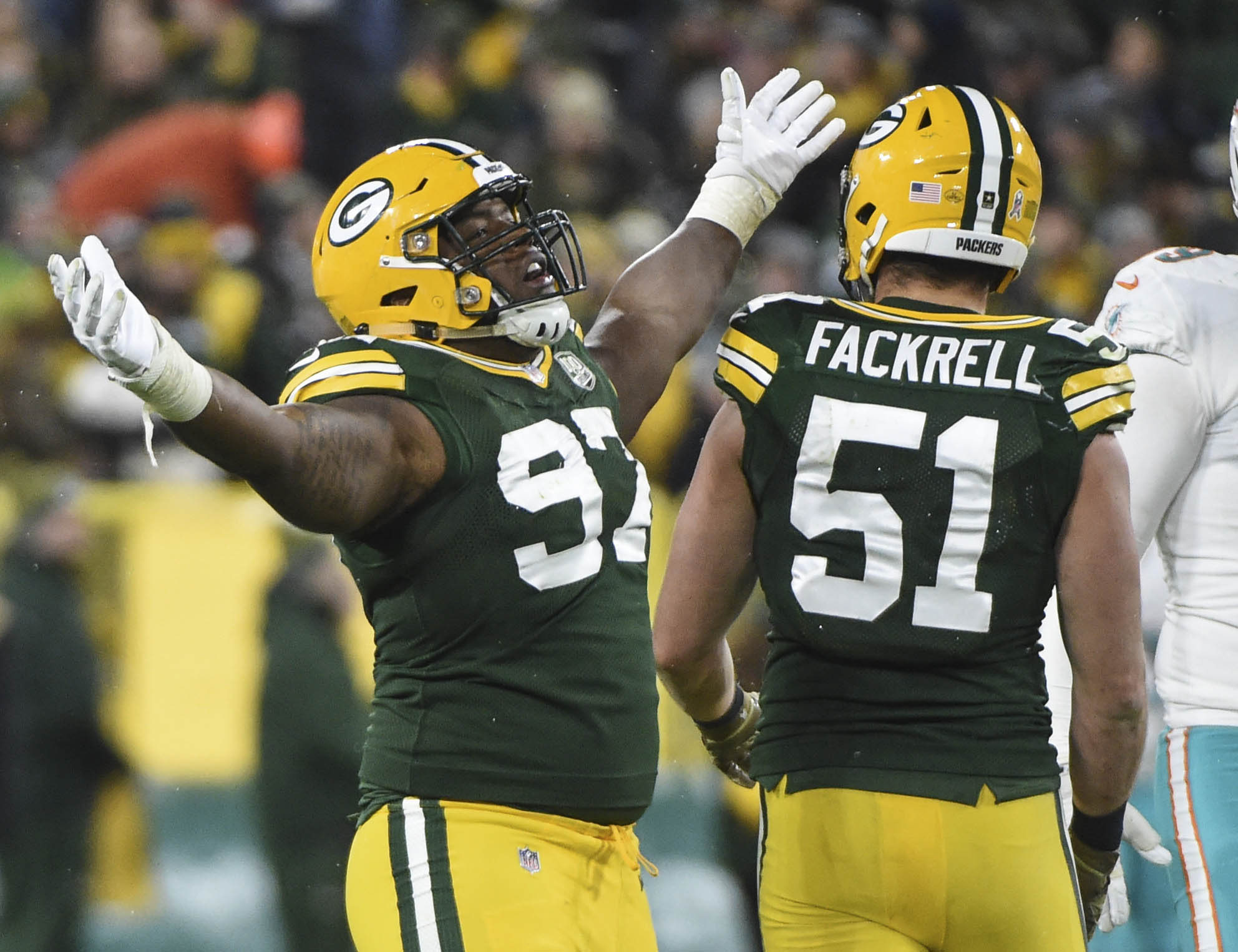 After nine games, the Green Bay Packers find themselves tied for first place in the NFL in sacks with 31. This statistic even more amazing when you figure that the team doesn’t have an elite edge rusher on the roster. In fact, no player on the Pack has more than five sacks on the season through nine games.

So how are the Packers able to do this? There are several factors. The biggest one has been new defensive coordinator Mike Pettine. Pettine likes to devise schemes that keep quarterbacks guessing where the pass rush is coming from and offensive linemen guessing who they need to block on any given play. Regardless of where the pressure is coming from, the defense is designed to create mismatches so that there are more pass rushers coming in a designated area than there are blockers trying to stop them.

Pettine has a few favorite moves. He loves blitzing two players in the A-gap between the center and the two guards. He also loves to line up eight players at or near the line of scrimmage and send at least four or five of them at the quarterback. That keeps the defense guessing who’s charging at the quarterback and who’s dropping into coverage.

An example of these diverse looks can be seen in this clip from the Packers win over the Dolphins in Week 10. Green Bay managed three sacks on four downs in the fourth quarter of the game and on each play, there was a different approach to rushing the quarterback and a different formation shown to the Miami offensive line.

On the first play, Kenny Clark picked up the sack off a stunt. Clark and Clay Matthews exchanged rush lanes and both blockers were confused. Clark got there first although Matthews wasn’t far behind. Clark is tied for the team lead with five sacks and is one of the better inside pass rushers in the league. He is one of the few defensive players on the Packers who is having a Pro Bowl caliber season.

On the second play, the defense lined up six players along the line of scrimmage and sent four. Montravius Adams beat the guard using his power and quickness and then ran down Brock Osweiler from behind to earn his first sack of the season.

Finally, on fourth down, Pettine again lined up six players at the line of scrimmage and sent four with linebackers Blake Martinez and Antonio Morrison dropping back into coverage. On this play, the secondary blanketed Miami’s receivers and Reggie Gilbert was able to push his way through to sack Osweiler to clinch the win.

Reggie Gilbert gives credit to Pettine and his teammates. “I feel like we were able to give the offense a few different looks,” Gilbert told Packers.com. “I feel like we got them in downs where we knew they were going to pass the ball, so we did a good job of controlling the sticks. We were able to pin our ears back a little bit and get after him.”

Good coverage has also been the cause of many sacks for the Packers this year. When quarterbacks don’t have a receiver immediately open, the Packers pass rushers have more time to get to the passer.

The Packers have been able to get 31 sacks despite falling behind in many of their games in the first half. The Bears, Redskins, Lions, 49ers and Patriots all had leads on the Packers which gave opposing offenses more play calling options. If the offense would be more productive early in games, the defense could put even more pressure on opposing QBs when they know the offense needs to throw on nearly every play.

This week, the Packers face Seattle’s Russell Wilson, one of the league’s most mobile and elusive quarterbacks. Both Pettine and the defensive players will have to be at their best to be equal to that challenge and continue collecting sacks. It will be interesting to see what formations Pettine cooks up on a short week.